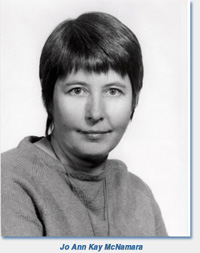 Scholar of women’s and religious history

Jo Ann Kay McNamara, professor emerita of history at Hunter College, City University of New York, died on May 20, 2009, of complications from a broken shoulder. During her long career, her scholarship became renowned around the world. The culmination was the publication of her monumental book Sisters in Arms: Catholic Nuns Through Two Millennia (Harvard University Press, 1996). She is survived by a son, Edmund Clingan.

McNamara was born May 7, 1931, in Janesville, Wisconsin. The Great Depression, the New Deal, and World War II shaped her view of the world. An admirer of Franklin and Eleanor Roosevelt, she passionately believed in the Four Freedoms.

In 1950, she moved to New York City and lived there for the rest of her life. She loved the energy and culture that the city offered. She received her BA and MA from Columbia University. In 1967, she earned her PhD in medieval history under the direction of John H. Mundy. Her revised dissertation was published as Gilles Aycelin: A Servant of Two Masters (Syracuse University Press, 1973).

From 1962 to 1998, she taught at Hunter College, where she inspired countless students. She began by teaching basic surveys of ancient, medieval, and early modern European history along with some more advanced courses in ancient and medieval history. She introduced many new courses into the curriculum, including courses on European women, the history of Christianity, and the history of law. She was part of an interdisciplinary team that created Hunter’s women’s studies course and taught that course. She served Hunter on its Faculty Senate and in other capacities. In 1997, she received the Hunter College Faculty Excellence Award for Research.

She broke important new ground with three seminal articles co-written with Suzanne F. Wemple: “The Power of Women through the Family in Medieval Europe, 500–1100,” “Marriage and Divorce in the Frankish Kingdom,” and “Sanctity and Power: The Dual Pursuit of Medieval Women.” The last-named article was published in the first edition of Renate Bridenthal and Claudia Koonz’s Becoming Visible. Her research led her back to the founding of Christianity. A New Song: Celibate Women in the First Three Christian Centuries (Haworth Press, 1983) looked at the formation of women’s religious communities and their role in the early Church. She then set to work on her magnum opus.

Sisters in Arms received wide acclamation. In the New York Times Book Review, Antonia Fraser called it “a magnificent achievement.” Jaroslav Pelikan described it in the New Republic as an “extraordinary book,” and Elizabeth McNamer in the Washington Post Book World said it was “undoubtedly the definitive work on nuns.” It has appeared in Dutch, Spanish, and Italian translations. She gave lectures on this topic in settings ranging from Forsmark, Sweden, to Wellington, New Zealand.

Even as she completed the history of nuns, McNamara began to consider men’s history and how gendered history changed larger social and political structures. Delivering the keynote address at a 1990 Conference on Men in the Middle Ages at Fordham University, she suggested that the century from 1050 to 1150 marked a fundamental reordering of the gender, social, and political systems. This paper, in which she suggested that “broad social changes, complicated by the ideological struggle between celibate and married men for leadership of the Christian world, precipitated a masculine identity crisis,” was published in 1994 as part of the essay collection Medieval Masculinities, edited by Clare Lees (University of Minnesota Press), and continues to exert great influence.

In addition to her original scholarship, she was a formidable translator of French and Latin. Her translation of Pierre Riché’s Daily Life in the World of Charlemagne (University of Pennsylvania Press, 1978) was a great success. She translated the lives of many saints and, along with John E. Halborg and Gordon Whatley, published a selection of them as Sainted Women of the Dark Ages (Duke University Press, 1992). Her last published book was the translation of Simone Roux’s Daily Life in Medieval Paris (University of Pennsylvania Press, 2009).

McNamara also gave considerable service to the profession. She was part of the Coordinating Committee of Women in the Historical Profession. She was involved from the beginning in the Berkshire Conference on the History of Women, co-chairing its fifth conference with Barbara J. Harris. She served on the editorial board of the Journal of Women’s History and was the 1996 Program Committee Chair for the American Catholic Historical Association. In 1991 and 1992, she was a member of the AHA’s Program Committee, the latter year as co-chair. She also served in 1996 on the AHA’s G. Waldo Leland Prize Committee. She was a force in the New York scholarly community. She was a member of the Columbia University Seminar on Women in Society and was a founding member of two groups originally sponsored by the Institute for Research in History: Family History and Medieval Hagiography (the latter informally known as “Friends of the Saints”).

From her early days, she was a political activist. In the 1950s, she worked against nuclear weapons and for civil rights, and met Martin Luther King Jr. She would later march against wars in Vietnam and Iraq. She went to Washington to protest the results of the 2000 election, and was an outspoken critic of the George W. Bush administration.