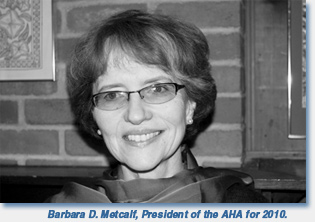 Those of us who have had careers as college teachers can carry our professional identity life long. In my case, with my retirement this year, I now often identify myself as “professor of history, emerita.” I feel lucky in having been able to make the choice to take up this title at a time when many colleagues feel constrained to postpone retirement because of the economic downturn. But I feel lucky as well in that a career focused on history often leaves us with varied resources to draw on as we move into a later stage of life.

Our careers as historians vary enormously depending on a very wide range of factors, among them personality and the kind of employment we find ourselves in. The ways we continue doing history after retirement, if we do so, vary as well. One of my brothers-in-law also retired this year after a career as a community college teacher. A person whose job encouraged wide-ranging interests, he has begun studying Arabic, a far cry from his graduate field in German history. And he is currently applying his excellent skills as a teacher by volunteering in a community-based writing program. Equally remarkable is the post-retirement activity of an emeritus colleague from the University of California system, who is now teaching ancient Roman history to prisoners at San Quentin.

The distinguished Americanist historian, Merrill D. Peterson, must have thought he was breaking with his earlier career completely when he joined the Peace Corps at age 76. But according to a recent obituary, his moral commitments and his historian’s skills, reinforcing each other, led him to write a history of the genocide in Armenia, the country he was posted to, in a book published in 2004.1

Another activity many of us have perhaps long been envious of is “a new career” for emeriti as tour group leaders or lecturers. Apart from the pleasure of travel for those able to do this, there is also the pleasure of making a contribution to the historical understanding of a receptive audience. I think of a historian of the 20th century United States who has lectured on tours to the Panama Canal and Alaska. Imagine how much more nuanced a picture of the social and political implications of U.S. involvement in those areas is gained by those travelers in the company of a historian who himself has produced revisionist arguments on American society and politics. One of my former colleagues, a master teacher, captivated generations of undergraduates by introducing the history of Europe by a focus on successively important cities. Having myself heard one of his unforgettable lectures, I can imagine how enriching it must be to see these cities in his company.

For those of us whose historical activities have included research and writing, retirement can, of course, be a particularly golden time, and for myself I’ve been thoroughly enjoying the beginnings of a new project. As someone who has worked primarily on the transformations of Islamic educational institutions and Islamic reform movements, I’m astonished to find myself immersed in a very different project focused on one of colonial India’s princely states.

When I presented a preliminary paper on this subject to a group of colleagues earlier this year, the convener asked me about the genesis of the project. I explained that I had stumbled on the project by sheer accident when I participated in a workshop otherwise made up of architects and art historians. And then, almost beyond conscious choice, I found myself almost inexplicably drawn in. Though my questioner did not exactly say that his query about the genesis of the project was a trick question, it turned out that virtually everyone in this series of talks by historians had said the same. Each presenter was working on a project somehow thrust on them; each faced, in short, a topic that just needed to be done. This somewhat amusing common response is one dimension of the many strands that go into seeing history as a calling, an occupation whose activities deserve to be—need to be—pursued.

Apart from research, that kind of commitment is also evident in the many roles that emeriti play, whether in their own institutions or others, entailing “professional service.” I know from the recently completed work of the 2009 Committee on Committees that many of our emeriti members are willing to serve on our Association’s prize committees.

For myself, I am deeply honored and grateful for what one friend described as my “soft landing” into retirement by my role in the Association, first as president-elect and now as president. Even for historians, the above-mentioned positive stories aside, retirement for almost everyone brings with it anxieties about one’s role and activities; my role in the AHA provides me an interval in which I continue to immerse myself in activities related to history and to historians in an organization I genuinely believe in.

The contrast with many other kinds of occupations is stark. In many lines of employment, retirees face the classic retirement dilemma of intense work that overnight seems to come to an abrupt end. One of my students, a historian who is at the beginning, not the end of a career, told me a story that brings this home—a story that can make us feel good about our career choice. The son of not one but two Pakistani military officers, he was well on his way to fulfilling his parents’ practical hopes for him with a strong educational foundation in engineering and a secure job. So when, some years into career and marriage, he announced his plans to return to college for a BA so he could pursue graduate work in history, it was met with disbelief by the parents on both sides. But as he struggled to explain this choice, he soon elicited dawning admiration from his recently retired father whose service career had come to an end. “You mean,” the father essentially said, “you can just keep doing history for the rest of your life!”

Members of the younger generation, like this student now completing his dissertation, have serious reasons to be troubled by the challenges facing higher education in this country. Society as a whole needs to be troubled as well. Our institutions of higher education, like the public university to which this student returned, have inadequate resources to maintain standards and keep their doors open to students across class lines. Sustaining our educational institutions of all kinds, and the study of a subject as alluring and engaging as history, are critically important and interrelated goals that all of us need to think about seriously and pursue actively. The study of history is a pragmatic subject, one profoundly enmeshed in issues of the present, sometimes explicitly and, even if not, always a resource for perspective on issues of individual and social life. The pursuit of history is a source of pleasure in many ways, and part of that pleasure is knowing that a career in history matters—even beyond retirement.

Barbara Metcalf (Univ. of California at Davis, emerita) is president of the AHA.