Perspectives Gets a New Name 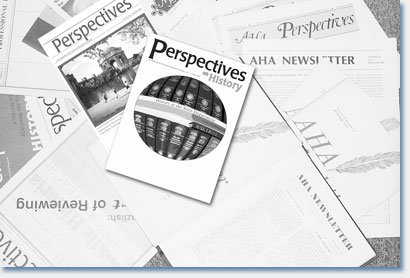 As many of you may have noticed, Perspectives has now become Perspectives on History. This is intended to be more than a nominal change. Not only will the new title more directly indicate the contents of this magazine and distinguish it more clearly from its many namesakes, it will also mark—we hope—yet another significant step in this publication's evolution.

This periodical started in 1962 as the simple newsletter of the American Historical Association, largely as a spin-off of the news and information sections of the American Historical Review. In September 1982 the Newsletter was renamed Perspectives. Since then, and especially in the past two decades, it has grown even more. A succession of innovative editorial changes and the addition of new columns—helped by first-rate teams of editorial and technical staff, contributing editors, and editorial advisory boards, working with an industrious in-house editorial board—transformed Perspectives. It significantly expanded its scope to include a wider range of subjects and approaches to history—encompassing research and teaching practices, public history, and emerging technologies (as well as more traditional technologies, such as film). It also acquired a popular digital presence on the AHA's web site as Perspectives Online, offering to readers worldwide virtually the entire text from each monthly printed issue.

As it enters its 46th year, this magazine is now well established as the journal of record for anyone working in the field of history. It is also a journal that could truly complement the American Historical Review—covering the many practices of history, while the AHR deals with new scholarship.

But the new name of the printed magazine also signifies an attempt to change, to make Perspectives on History even more useful to all those who practice history in its many varieties. We will attempt to change not only in terms of content, but also in terms of design and presentation. Toward this goal, we will canvass the opinions of our readers in the coming months (conducting an online reader survey in the spring, for instance). After all, where a magazine such as Perspectives on History is concerned, it is only the readers who can truly give an answer to the question, "What's in a name?"