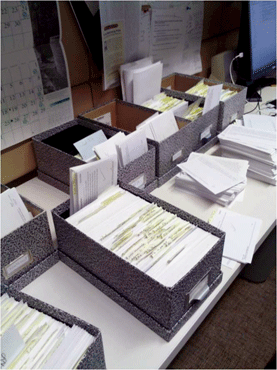 The heart of the historian's craft may be research, but a new report claims the discipline fails to prepare graduate students in basic skills and lags in the adoption of relevant tools and materials. Drawing on qualitative interviews with dozens of historians and research support personnel, the study from Ithaka S+R challenges historians—and many of those who assist the profession—to rethink their current practices.1

The report highlights a number of fundamental changes in the ecosystem for historical research. As an entry point into the issues, the authors focus on the growing acquisition of digital materials in the research process. They note that Google is now the starting point for many—if not most—history projects, and research often continues along a digital path with the acquisition of materials from online journals, subscription databases, Google Books, and subsequently through the use of digital cameras.

As a result of these changes, libraries are less likely to be the first stop in the development of new projects, as historians turn to online collections for their preliminary surveys of the secondary literature. Authors Roger Schonfeld and Jennifer Rutner note that "While [historians] may disclose that they 'miss' going to the stacks, convenience appeared to win out over the value of browsing." As a result, the role of the library for historians is narrowing, and serves primarily as a buyer of databases, a source for interlibrary loans, and a pedagogical tool.

Likewise, scholars are spending less time in the archives, addressing growing pressures of time with the added speed of digital cameras. The authors report that a "consequence of shorter research trips is that researchers spend the majority of their time in the archives informally digitizing materials for later review and analysis." They find that this allows less time for traditional forms of serendipity and analysis that take place while leafing through archival records, and makes researchers more dependent on available finding aids.

As a result, historians are increasingly isolated from the professionals who have traditionally supported their research. Librarians and archivists interviewed for the report noted that historians often fail to consult them in the course of their research—missing out on crucial opportunities and resources. Conversely, the historians often complained about libraries and archives—noting the absence of adequate finding aids, restrictions on the use of digital cameras, and charges for services.

Beyond the changing relationships between historians and other professionals, the study finds significant disruptions in the extended process of turning the materials of research into scholarly articles and monographs.

While the historians in the study generally agreed that new digital tools can significantly increase the speed and comprehensiveness of their research, they also reported a growing number of additional challenges in the process of writing and analysis. Schonfeld and Rutner note that most historians are still using methods developed for the age of print—including index cards, yellow Post-it notes, and file cabinets of paper—to assemble their materials, insights, and ideas into an article or book.

These research habits appeared fairly ubiquitous in the discipline. The authors report that "Newer scholars who take notes by hand referred to themselves as 'old fashioned'; however, taking notes on paper is a prevalent practice across generations and sub-fields. Nearly all of the interviewees had some combination of paper and digital notes and often lengthy processes for re-writing and organizing these notes."

Schonfeld and Rutner argue that these print-based organizing methods are increasingly interfering with the analysis of digital materials. As a growing number of historians fill up their hard drives with materials that exist only as electronic files, they are finding the existing methods often result in lost or inadequately processed information. They note that "The ability to organize and access photographs in a constructive way after a trip is a sticking point for many of those who worked with digital cameras."

Despite the availability of a variety of bibliographic and citation management tools, the historians interviewed for the report made only very limited and often haphazard use of the available tools. Some interviewees cited high learning curves. Others indicated disappointment with the effectiveness of the tools across each stage of the writing process—from collection of secondary source materials to help frame the research agenda, the primary source materials that provide the raw materials for their research, and the writing and analysis process that reduces those elements into a work of scholarship.

At bottom, the report finds that historians are deeply individualistic, and poorly trained in one of the most fundamental areas of their work. As a result, the preparation of new members of the discipline often leaves training up to haphazard discovery. One of the fundamental issues raised in the report is whether and how the discipline might develop a better sense of responsibility in this area.

To address these challenges, the authors offer an array of recommendations to historians, librarians, and archivists. They press archivists and librarians to revise the type of tools and support they provide history researchers—particularly by providing resources and support better suited to emerging digital research methods. Their principal recommendation to archivists, for instance, is to provide better online finding aids, so historians looking to quickly vacuum up materials with a digital camera can come to the archive with a clearer notion of the objects of their research.

For historians, they encourage doctoral programs to "re-examine how they expect PhD students to learn fundamental and innovative research practices." They conclude that while "[h]istorians feel a great deal of control over and comfort with their personalized approach to research…. Starting a conversation about research practices within the community, and re-instating formal training on research methods, could provide significant support for the field."

The discipline's ambivalence about training new historians in research methods goes back at least 50 years. In a qualitative study of faculty at doctoral programs in the late 1960s, Walter Rundell found methods courses were being phased out, and "even where the course exists … critics frequently raised doubts about its utility, and many professors were explicit in their distaste for teaching it."2

The new report from Ithaka S+R demonstrates the consequences of this neglect, as current and future scholars are left to muddle along and adapt to each wave of change largely on their own.

Robert B. Townsend is the deputy director of the AHA and author of History's Babel: Scholarship, Professionalization, and the Historical Enterprise in the United States, 1880–1940.

2. Walter Rundell Jr., In Pursuit of American History: Research and Training in the United States (Norman: University of Oklahoma Press, 1970).