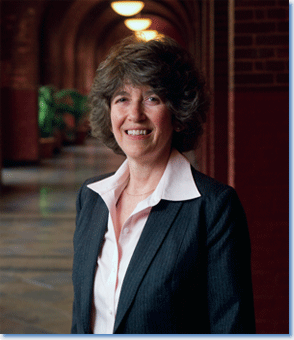 Scholar of China-U.S. Relations and Life Member of the AHA

Professor Tucker held a joint appointment in the department of history and the Edmund A. Walsh School of Foreign Service at Georgetown University.

Nancy Bernkopf was born July 12, 1948, in New York City. She graduated in 1970 from Hobart and William Smith Colleges in Geneva, New York, and received a PhD in history from Columbia University in 1980. She taught at Colgate University for seven years before joining the faculty of Georgetown University in 1987.

In a career spanning nearly four decades, Nancy Bernkopf Tucker was one of the world's preeminent experts on the history, diplomacy, and politics of U.S.-China relations and on the cross-strait relationship between the People's Republic of China and Taiwan. Her work was distinguished not only by an exhaustive mastery of primary sources and an adherence to the most rigorous standards of multi-archival historical scholarship, but also by a nuanced analytical engagement with the various dimensions of inter-societal relations—economic and cultural as well as ideological, political, and military.

Nancy Tucker made a decisive mark on the field with her first book, Patterns in the Dust: Chinese-American Relations and the Recognition Controversy, 1949–1950 (1983). Patterns in the Dust examined the impact not only of strategic and diplomatic calculations, but of missionaries, business interests, and mass media, as well as the actions of Mao Zedong's government on the Truman administration's deliberations over whether to maintain formal ties with the Nationalists in Taiwan or recognize the new Communist authorities in Beijing. The effect of Patterns in the Dust was to change the way historians understood the origins of the Cold War in Asia: no longer could the subject be discussed as though it were simply an extension or offshoot of the Cold War in Europe.

Several more books followed: In Taiwan, Hong Kong, and the United States, 1945–1992: Uncertain Friendships (1994), Tucker examined the evolution of this nexus of relationships over the course of a tumultuous period stretching from the Chinese Civil War through the end of the Cold War to the aftermath of the crackdown on Tiananmen Square. Strait Talk: United States-Taiwan Relations and the Crisis with China (2009) focused on the dynamics and long-term impact of the diplomatic revolution set in motion by Richard Nixon's overture to mainland China in the early 1970s. Finally, in the very midst of her struggle with illness, Tucker forged ahead with the completion and publication of a final book: The China Threat: Memories, Myths and Realities in the 1950s (2012).

In addition to these works, Tucker also acted as editor and contributor for a number of volumes, including a massive oral history of U.S.-China-Taiwan relations entitled China Confidential: American Diplomats and Sino-American Relations, 1945–1996 (2001), Dangerous Strait: The U.S.-Taiwan-China Crisis (2005), and co-edited (with Warren Cohen) Lyndon Johnson Confronts the World: American Foreign Policy, 1963–1968 (1994).In her work, Nancy Bernkopf Tucker was determined to speak to a broad, diverse, and international audience. The first three of her single-authored books came out in Chinese translation, as did China Confidential. Her scholarship cut across disciplines and spoke to multiple audiences. She published articles and essays in venues such as the American Historical Review, Political Science Quarterly, Foreign Affairs, Diplomatic History, Cambridge Review of International Affairs, Journal of American History, and Pacific Historical Review, as well as in influential public forums such as the Washington Quarterly and the Christian Science Monitor. Tucker served in government on a number of occasions, both in the State Department and, most recently, in the Office of the Director of National Intelligence, where her work earned her the 2007 National Intelligence Medal of Achievement for distinguished meritorious service to the United States. Tucker briefed senators, testified before Congress, and presented to a working group of the Joint Chiefs of Staff. She was interviewed on major news programs including National Public Radio's All Things Considered and the Diane Rehm Show, PBS' NewsHour with Jim Lehrer, and ABC News' Nightline; by newspapers and magazines such as the Washington Post, Time, International Herald Tribune, and Far Eastern Economic Review; and by leading newspapers in Germany, Ireland, Japan, Hong Kong, Shanghai, and Taiwan.

Nancy Bernkopf Tucker held a number of fellowships including appointments at the Charles Warren Center at Harvard University from 1988 to 1989, the Woodrow Wilson International Center for Scholars from 1994 to 1995, the Rockefeller Foundation Bellagio Center (Italy) in 2001, and the Institute for Advanced Study at Princeton in 2005. Other fellowships included stints at the United States Institute of Peace and the Chinese Academy of Social Sciences. She was a member of the Council on Foreign Relations and, in 2008, was appointed a senior scholar at the Woodrow Wilson International Center. In November 2012, the Wilson Center announced the creation of a lecture series in her honor, commencing in 2013: the Nancy Bernkopf Tucker Lecture Series in U.S.-East Asia Relations.

Tucker's remarkable record of achievement was belied by her unaffected manner and the directness and sense of humor she brought to her interactions with friends, colleagues, and students. She loved to travel, appreciated fine dining, and was a fan of Popeyes Fried Chicken. She relished the delights of intellectual repartee and loved a good mystery novel. Those who knew her were inspired by the quiet determination and good cheer with which she continued to work, right through the worst of her illness. Over the last few years, while completing her fourth book, she also found the energy to testify on Capitol Hill and to remain engaged in public debates on matters of policy. Her last op-ed piece appeared (in Newsday) just eight days before she died.

Nancy Bernkopf Tucker's absence will be felt deeply by her colleagues, her students, members of the staff at Georgetown University, and the international community of scholars to which she contributed so much over the course of her distinguished career. She is survived by her husband, the historian Warren Cohen, and by her stepsister, Vivian Epstein.