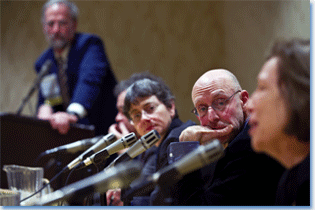 It wasn't hard to spot the graduate students at the airport gate—the air around them was nearly vibrating with anticipation—but I was pleasantly surprised to note that the atmosphere seemed more excited than anxious. This was to be my first impression of the AHA's annual meeting, and it would be an accurate bellwether of my overall impressions of the meeting and the professional environment. Having attended a few academic conferences in related fields as well as several editions of the American Booksellers Association convention, I expected an atmosphere of barely repressed agitation that often accompanies large professional meetings, especially when job-seeking takes up a large share of the activities. What I found instead was an environment that was generally calm and amiable, even fun, and that was supported by a well-run and thoughtfully organized framework.

A caveat is required here—as a new employee of the AHA, I attended the conference in a different capacity than most, and so my participation (and my subjectivity) should be taken into account. Nonetheless, I did attend several panels in my own areas of interest and generally tried to see as much of the conference as I could as if I were a "civilian."

The first day in the bustling New Orleans Marriott lobby provided a vivid example of the professional historian as a cultural type. The departing Louisville fans (the Marriott had hosted the underdog Cardinals for the Sugar Bowl game), encased head-to-toe in red and looking entirely spent, gave way to a more subdued and decidedly less colorful crowd as the day wore on. Historians soon took over the two conference hotels, and could be found strewn about in corners and hallways, easily identifiable by their open laptops, ties and jackets, and the blue glow of the screen reflected in their glasses.

I find it interesting how much academic conferences have in common with each other in terms of deportment and rituals of behavior, but I was pleased to note in all the panels that I attended that the audience was both engaged and collegial in their comments, something I have observed is not always the case at professional academic conferences. Even in sessions where energy was flagging or the speakers were a bit unfocused, the audience members seemed to bring great questions that often brought things back on track.

The two major sessions of the meeting for me were the plenary, "The Public Practice of History in and for a Digital Age,"and the president's speech both of which emphasized the vital need for academic historians to re-orient their teaching and writing to the public and the nonspecialist audience. It was here that I became aware of a sense of urgency and mission, and of the fact that this was still a controversial proposition. I found this a really unfamiliar problem, coming from the field of architectural history, in which there is less discussion of the idea of public engagement. Academic architectural and landscape historians don't always feel a need to direct their work toward the general public, in part because they assume that the preservationists have that covered. Or perhaps there has not been sufficient pressure applied. I found it refreshing and even exhilarating to listen to William Cronon, who occupies a position of great respect among architectural and landscape historians, as he exhorted his colleagues toward greater commitment to compelling, intelligible narrative in all their professional endeavors. I imagined him giving the same speech at the academic conferences in my field, and on how unsettling it would be to many in the audience.

A discussion of the president's talk leads us naturally to the subject of food and the reception afterward, held on an upper floor of the Marriott, with starlit views of the city and the Mississippi River. This gathering was the highlight of the many smaller but no less well-executed receptions during the annual meeting.

Although we were in New Orleans, a culinary capital, I found it a bit of a challenge to find healthy, reasonably priced food that I could get quickly in between sessions, though the restaurant round-up published on the AHA Today blog did help point me toward Rouses market, where I found, at long last, vegetables.

In between sessions and blog posts for AHA Today, I wandered over to the Job Center at the Sheraton to see how it was set up. This to me seemed very much the locus of energy, and I solicited stories from many of the attendees about conferences past and how much all of the interviewing processes had been improved and generally made more respectful of both the applicants and the interview committees.

I spent a lot of time in the exhibit hall, which was filled with tantalizing vendor booths from academic and trade publishers, inhaling the familiar scent of paper. Judging from the amount of activity, I would say that the book is not at all dead, though I expected to see more interactive and e-book displays. This may have been prohibitively expensive for the publishers to put up, but it seemed that, for a conference that considered the practice of public history in the digital age to be one of its main themes, there was a significant absence of actual digital projects on display.

I was sorry to leave on Saturday night—in no small part because I hear the publishers' book sales on Sunday were not to be missed—and truly disappointed not to have been able to take advantage of any of the tours offered in conjunction with the meeting. I felt I had been in New Orleans, but not of it; I think this is a common lament for conference-goers in attractive cities. We never seem to have nearly enough time to do everything we planned at a conference and yet, we are more than ready to go home when the airport shuttle pulls up to the hotel door.

—Jennifer Reut is the associate editor of Perspectives on History.