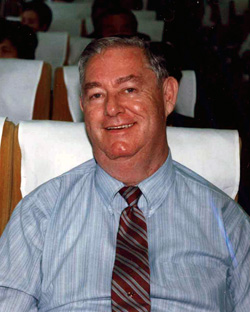 Historian of the Mexican Inquisition

Richard E. Greenleaf, eminent scholar of the Mexican Inquisition and former director of the Stone Center for Latin American Studies at Tulane University, died on November 8, 2011, after many years of living with Parkinson's Disease.

Greenleaf was born on May 6, 1930, in Hot Springs, Arkansas. He attended the University of New Mexico for his BA, MA, and PhD degrees. He earned his doctorate in 1957 under the direction of France Vinton Scholes with a dissertation entitled "Zumárraga and the Mexican Inquisition, 1536–1543." Greenleaf began his teaching career in 1955 at the University of the Americas in Mexico City where he served as chair of the Department of History and International Studies, the dean of its graduate school, and eventually its academic vice president. He moved to Tulane University in New Orleans in 1969 and became director of the Roger Thayer Stone Center for Latin American Studies the next year. In 1982, Greenleaf was named the first France V. Scholes Chair of Colonial Latin American History. He was a tireless and effective fundraiser who built up the interdisciplinary studies of Latin America at Tulane to include a significant graduate program, valuable library collections, and travel grants for student research. In 1998 he retired to Albuquerque where he continued to work with graduate students as an adjunct research professor at his alma mater.

Richard E. Greenleaf was a prolific scholar. He was the author of 11 monographs and was the foremost authority on the Mexican Inquisition. His major book contributions were Zumárraga and the Mexican Inquisition, 1536–1543 (1961), The Mexican Inquisition of the Sixteenth Century (1969), Mixtec Religion and Spanish Conquest: The Oaxaca Inquisition Trials, 1544–1547 (1991), and an edited collection called The Roman Catholic Church in Colonial Latin America (1971). In addition, Greenleaf was the author of nearly 50 chapters and articles in the areas of his expertise which included: the Mexican Inquisition, colonial church history, the Borderlands, Spanish Louisiana, Mexican Freemasonry, and colonial labor systems. The American Academy of Franciscan History recently honored his career by publishing his most significant articles in one volume as The Inquisition in Colonial Latin America: Selected Writings of Richard E. Greenleaf. A similar volume was also published in Mexico in 1985 with the title Inquisición y sociedad en el México colonial. Greenleaf's faculty colleagues thought he would be most proud of his scholarly legacy, and rightly so.

As part of his broader service to the profession, Greenleaf served on many editorial boards including: The Americas, the Hispanic American Historical Review, and the Handbook of Latin American Studies. He received numerous academic honors notably the Serra Award for Distinguished Scholarship of Colonial Latin American History, the New Mexico Endowment for the Humanities Award, the Society for Crypto-Judaic Studies Lifetime Achievement Award, and Silver Medal. Throughout his long career, he remained committed to the cultivation of academic connections between Mexican and North American scholars and for his efforts he was honored with the prestigious Mexican National History Award, known as the Sahagún Prize.

Greenleaf was a formidable mentor to 34 doctoral students who have gone on to distinguished careers of their own. He participated in countless MA theses and remained equally committed to undergraduate education. He left a $1.2 million bequest to University of New Mexico to establish the Greenleaf Student Fellowship, the Greenleaf Visiting Library Scholar Program and the Greenleaf Crypto-Judaism Program. He also generously endowed the Richard E. Greenleaf Library Fellowships at Tulane University which provide support for Latin America-based scholars to visit their collections to conduct research.

In the weeks after his death, his former students have been sharing memories of El Jefe with each other. We all agreed that Greenleaf was generous with his time and advice, and that he had a mischievous sense of humor once we got past his formal exterior. He was dignified and kind. One person can still picture him seated at the end of the long conference table in our colonial historiography seminar presiding over our presentations like a proud patriarch. Another former student appreciated how often he brought prominent scholars to campus in order to build connections for us beyond our own institution. Another has especially fond memories of Greenleaf's annual summer party at the El Abajeño restaurant in Mexico. I remember that he could always be found with an ice-cold can of Dr Pepper on a steamy New Orleans afternoon. He had a series of stock jokes that he liked to use in classes. For example, whenever he mentioned the memory of the iconic Niños Héroes (boy heroes) who resisted the U.S. troops' assault on Chapultepec Castle at the end of the Mexican-American War, he would lean over the podium, waggle his eyebrows with mock seriousness and intone "They may never have existed, and yet . . . they exist." It brought the house down every time!
Richard E. Greenleaf is survived by an immediate family that includes his sister-in-law Carla Greenleaf and his nephews Robert and Randy and their children. His loss is also keenly felt by his former students who remain grateful for his high standards of scholarship and the continued interest he took in our lives and careers. He will be remembered, and he will be missed.

A funeral service was held on November 25 in Albuquerque. The Stone Center for Latin American Studies at Tulane University held a memorial service on Wednesday, January 18, 2012.