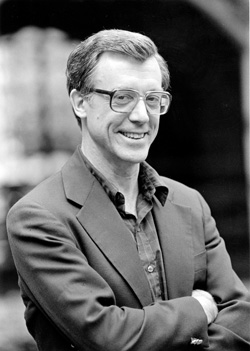 David Montgomery, the leading figure in the "New Labor History," who drew on his experiences as a worker and labor activist to transform our understanding of working-class life, died on December 2, 2011.

Born on December 1, 1927, in Bryn Mawr, Pennsylvania, Montgomery joined the U.S. Army at the end of World War II and, after completing his degree at Swarthmore College, spent the 1950s as an activist in the Communist Party and the United Electrical Workers, International Association of Machinists, and Teamsters unions, first in New York City and then in Minnesota. Although Montgomery left the party in 1957, he retained his commitment to civil and labor rights and remained politically active.

Blacklisted from industrial jobs, Montgomery completed his PhD at Minnesota in 1962 and settled at the University of Pittsburgh where he taught from 1962 to 1980. He taught with his life-long friend, the British historian E. P. Thompson at Warwick University from 1967 to 1969. There he became the focus of a university occupation when students learned that university authorities and employers were closely monitoring his engagement with activists in the Coventry auto plants. At Yale University he served as Farnam Professor of History from 1980 until his retirement, and he remained quite active in the profession down to the time of his death. He won teaching awards at both Pittsburgh and Yale Universities.

Known particularly for his research on the social relations of work, labor organization, strikes and other protest behavior, Montgomery's writings also analyzed radical political ideology and race and ethnic relations in working-class populations. He drew our attention from a narrow focus on institutions and collective bargaining to a capacious understanding of the ways in which social class and workers' agency shaped modern American society. His first book, Beyond Equality: Labor and the Radical Republicans (1967) explored how the claims of Civil War era workers briefly promised a greater degree of freedom for both wage earners and free people of color.

Workers' Control in America: Studies in the History of Work, Technology, and Labor Struggles (1979), a collection of essays, stimulated a generation of scholarship by his own students and many others on workers' agency on the shop floor. Here and in his masterful The Fall of the House of Labor: The Workplace, the State, and American Labor Activism, 1865–1925 (1987), he evoked an oppositional working-class ethic based on mutualism and class solidarity, affording us an entirely new perspective on the social and political implications of industrialization. We have neither a more vivid narrative of industrial work in its endless varieties, nor a better analysis of the role workers themselves played in its evolution. Montgomery analyzed the creation of a movement comprised of individuals from remarkably diverse backgrounds welded together through the efforts of a "militant minority" of radical men and women. Thus, he wrote, "Class consciousness was more than the unmediated product of daily experience. It was also a project."

In Citizen Worker: The Experience of Workers in the United States with Democracy and the Free Market during the Nineteenth Century (1993), Montgomery analyzed the coercive elements of state policy in support of the market. In Black Workers' Struggle for Equality in Birmingham (2004), co-edited with Horace Huntley, he evoked a rich black working-class culture and social movement in the South's most important industrial city, a neglected context for the emerging civil rights movement.

Montgomery's intellectual legacy is also found in his work on the editorial boards of the Journal of American History, International Labor and Working Class History, which he edited for many years, Labor History, and Labor: Studies in Working-Class History of the Americas; in the Labor and Working Class History Association, whose work he consistently supported; and in the University of Illinois Press series, The Working Class in American History, which he launched with Herbert Gutman and David Brody and now claims more than one hundred volumes in print. At the time of his death, Montgomery was working on a series of essays dealing with workers' struggles under imperialism in metropolitan and colonial cities around the globe.

David Montgomery was something of a paradox. One of the nation's most prominent Marxist historians, he never pushed his political perspective on others. Indeed, he seldom discussed his earlier life as an activist, even though these experiences had clearly shaped his scholarship and teaching. He respected a wide range of political opinion and, as a materialist, showed a rare sensitivity to his working-class subjects' religious commitments. Extremely precise and empirical in his research methods, his reading of history was complex and his prose thick with rich descriptions of workers' lives, leading some critics to complain that it was difficult for students to grasp. But he was unerring in his ability to capture these lives. David could be shy in social situations, yet he projected an infectious energy when he rose to speak at academic and political gatherings. As president of the Organization of American Historians he guided the group through a boycott of the St. Louis annual meeting headquarters, a hotel accused of discrimination against labor and minorities, and he led a march of historians and local activists to a nearby church where he looked very much at home in the pulpit addressing the historians who filled the pews.

David Montgomery was a gifted lecturer and a prolific scholar, but his most enduring achievement may be his mentoring of scores of his own doctoral students and hundreds of other scholars who benefited from his thoughtful and creative attention to their work. He was an unusually generous and supportive scholar and teacher and the profession benefited enormously from his efforts and his example.

Montgomery is survived by his wife Martel (Wilcher) Montgomery and his sons Claude and Edward and their families. His students and colleagues and the many people he touched throughout his career in the labor movement and in the historical profession join with his family and friends in mourning his loss.