"Getting It Right" at Chicago: The NHC Facilitates Interaction between Historians and Journalists 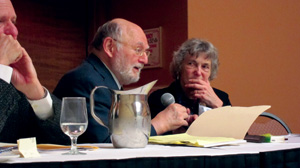 At the AHA's 126th annual meeting in Chicago, the National History Center launched a new partnership between journalists and historians, based on the idea that they can learn from each other as they pursue accuracy and acuity. The initiative, "Historians, Journalists, and the Challenges of Getting It Right," is cosponsored by the AHA, the National History Center, and two centers at the University of Southern California's Annenberg School for Communication and Journalism—the Norman Lear Center and the Center on Communication Leadership & Policy. An outcome of this new collaboration was four special sessions at the annual meeting that saw spirited discussions on the sometimes contradictory, sometimes complementary roles of historians and journalists in getting the "first draft of history" right.

In the first session, "American Biography and the Cold War," historian Alice Kessler-Harris (Columbia Univ.) explored the varied ways in which Lillian Hellman has been portrayed by journalists and historians—and by Hellman herself, in three best-selling memoirs. To some, Hellman was a heroine, to others a liar. Kessler-Harris examined the playwright's relationship with the Communist Party and her oft-quoted response to the House Un-American Activities Committee's efforts to force her to "name names" in the 1950s: "I cannot and will not cut my conscience to fit this year's passions." Kessler-Harris concluded that regardless of Hellman's foibles, she rose to greatness in that moment. Kessler-Harris was challenged by historians Steven Ross (Univ. of Southern California) and Maurice Isserman (Hamilton Coll.), and journalist Victor Navasky (Columbia Univ.). Navasky, a former editor of the Nation, recalled Mary McCarthy's memorable characterization of Hellman on The Dick Cavett Show, "Every word she writes is a lie, including 'and' and 'the,'" which led Hellman to sue McCarthy, Cavett, and PBS for defamation.

Martin H. Kaplan (Univ. of Southern California and the director of the Norman Lear Center), one of the guiding spirits of the Getting It Right project, turned the second session into a roundtable on journalists' and historians' differing imperatives in covering events and what they think of each others' approaches. Journalist Rick Perlstein and historians Michael Kazin (Georgetown Univ.), T. J. Jackson Lears (Rutgers Univ.), and Alan Brinkley (Columbia Univ.) used Brinkley's book The Publisher: Henry Luce and His American Century, as a springboard to a wide-ranging discussion. They focused first on whether Luce, one of the most influential figures in 20th-century journalism, actually cared at all about "getting it right," the extent to which he was motivated by making money, and its effects on the Time-Life empire he created.

"At today's morning panel, Kaplan asked if journalists are beholden to a simplified view of history," wrote Rick Shenkman of History News Network in a January 7 lead article entitled "AHA Features Panels on the Indifference of Journalists to History." "Jackson Lears immediately answered in the affirmative. He noted that journalists tend to simplify events while historians try to show how complex they are. Simplicity is inadequate because 'history is essentially tragic,' considering the unintended consequences that attend most events." 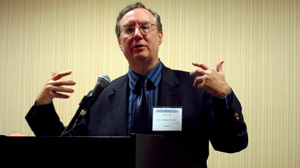 Historian Juan R. I. Cole (Univ. of Michigan), who runs the blog, Informed Comment, led off the third session, "Interpreting the Arab Spring," with a half-hour retrospective of the events of 2011 in Tunisia and the Middle East. He noted that because of technological and political developments, archival sources are more readily available to journalists and historians for recent events than for events occurring 25 years ago. He cited both WikiLeaks and newly released Arabic-language sources. Fellow historians Carolyn Eisenberg (Hofstra Univ.) and Leila Fawaz (Tufts Univ.) and journalist David Moberg of In These Times suggested variations on Cole's themes, but the sharpest challenge came from audience member Jeffrey Cox (Univ. of Iowa), who asked Cole to account for what Cox viewed as propaganda in Informed Comment for NATO's bombing campaign in Libya."I do not accept the charge that I functioned as propagandist," Cole retorted, pointing out that deposed Libyan leader Gaddafi began firing upon peaceful demonstrators well before the opposition took up arms. But he acknowledged that he had not approached the Libyan crisis with strict objectivity and had so informed his readers.

The Getting It Right series concluded with a conversation about American efforts at nation-building, featuring historians Jeremi Suri (Univ. of Texas at Austin) and Melvyn P. Leffler (Univ. of Virginia). Leffler offered a pointed critique of Suri's recent book, Liberty's Surest Guardian: American Nation-Building from the Founders to Obama, in which he argues that the urge to create nations is "part of America's DNA" and includes not only foreign adventures but post-Civil War Reconstruction.

C-Span and the History News Network covered two of the sessions organized by this new project. Video of the Arab Spring session is available on the HNN web site. Consult the NHC website, for air dates for C-Span coverage of the Luce session. In addition, audio recordings (with images) of the "Publishing and the American Century" and "American Biography and the Cold War" sessions can be found on the web site of the Norman Lear Center.