Researching the History of the Time Capsule

While working on his first book,Untimely Ruins: An Archaeology of American Urban Modernity, 1819–1919 (Univ. of Chicago Press, 2009), Nick Yablon (Univ. of Iowa) came across a postapocalyptic novel published in 1911 called Darkness and Dawn. This book “had a number of references to time capsules,” Yablon told Perspectives. “They were all used in diverse ways to reconstruct the events of the past and provide tools for survival in this kind of postapocalyptic wasteland. I was fascinated by these references and started to wonder when this tradition of the time capsule began.” 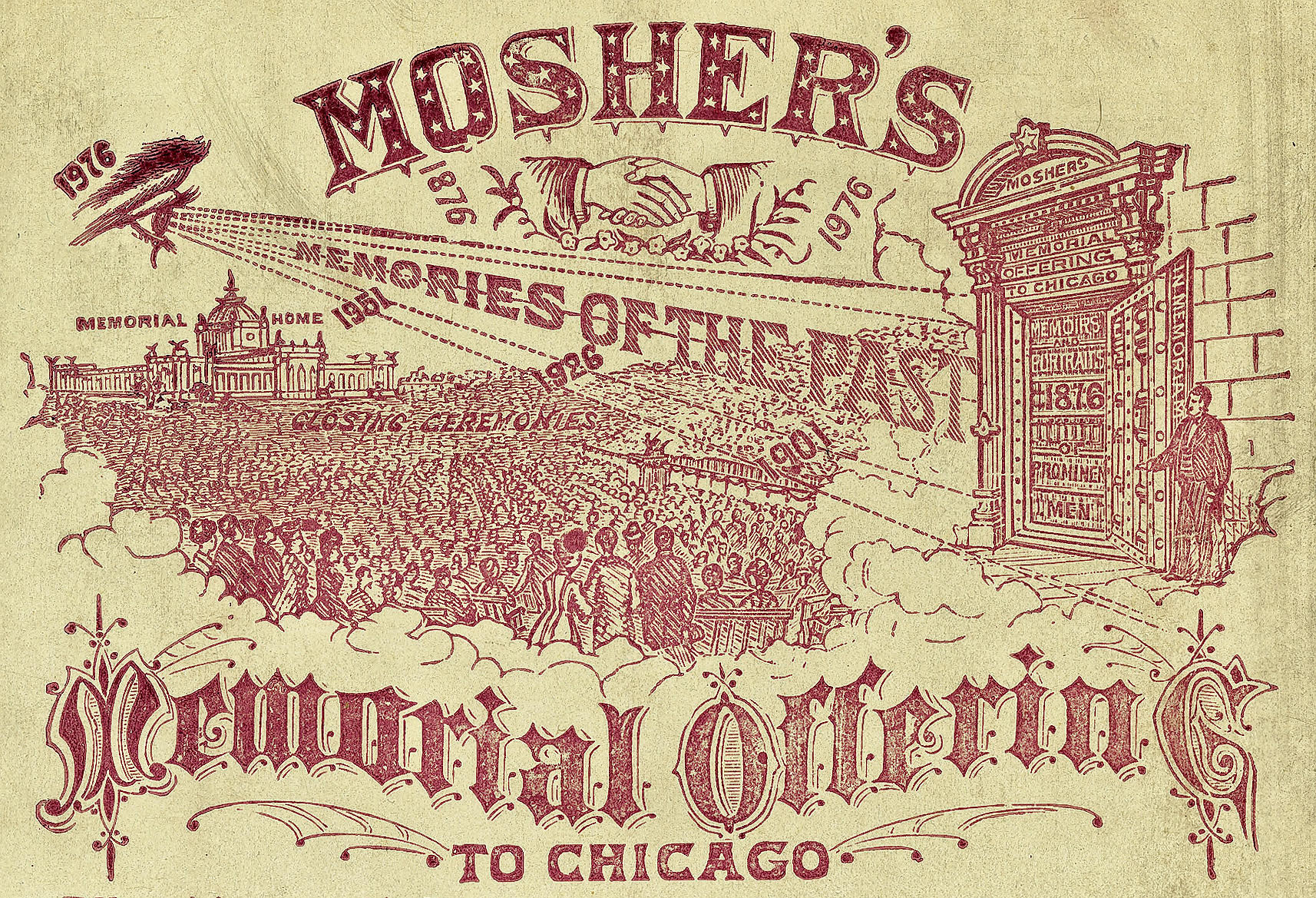 In his new book, Remembrance of Things Present: The Invention of the Time Capsule (Univ. of Chicago Press, 2019), Yablon traces the time capsule back to 1876, as “a spate of such timed devices, programmed to be opened a hundred years later, were launched in Washington, DC, Chicago, San Francisco, Boston, Amherst, and Ramapo, New York.” The centennial celebration of independence seems to have caused citizens of the United States to focus on the future, rather than the past. Yablon reads this as an assertion of “historical continuity into the future,” proof not only of the dominant belief in American progress, but deep, even buried anxieties about the continued existence of civilization. After the high cost of the Civil War, and amid increasing unrest because of labor issues, Americans worried about “potential threats to civilization” that could rob them of the future they hoped to see. There was also doubt at the time about the efficacy of traditional public attempts at preserving historical memory, such as libraries. The rapid industrialization of cities such as Chicago, for example, led to the 1871 Great Chicago fire and the destruction of many of Chicago’s paper archives.

Yablon argues that the time capsule also served “to foster national identity,” by means of creating a sense of a shared past, emphasizing the shared rituals of the present (such as reading newspapers, many of which were included in early time capsules), and creating a shared future. As he writes, “Through the ceremonial sealing of relics in a time vessel, citizens expressed solidarity with their successors and affirmed faith in the nation’s endurance.” The popularity of these early time capsules can therefore be read as a conscious attempt to create a coherent national identity that defies temporal constraints.

The popularity of early time capsules can be read as a conscious attempt to create a coherent national identity.

Though Yablon is wary of calling the time capsule a uniquely American phenomenon, the earliest time capsule outside of the United States appears to be the 1907 Paris Opera capsule . . . which happened to be created by American Alfred Clark of the Gramophone Record Company. “It seems as though [creating time capsules] wasn’t practiced beyond the US until well into the twentieth century,” Yablon told Perspectives, “though I want to hedge my claims there because there may be instances I’m not aware of, and I am defining this, the time capsule, of course, very narrowly.” In his book, he defines the time capsule as “an intentional deposit with a preconceived target date,” at which point it would be opened. Most other intentionally buried artifacts are not intended to be dug up again. The objects in ancient Egyptian tombs, for example, were placed there to assist the tomb’s inhabitant in the afterlife, not as a message in a bottle to future generations as what life was like under the reign of, say, Tutankhamun. Likewise, the post-revolution American fad of the cornerstone ceremony, or “the depositing of symbolic artifacts and documents in the first stone of a building or monument, usually in the presence of Masonic officials,” doesn’t count. Though these deposits were an effort to preserve ephemera from a specific point in time, they cannot be opened without destroying part of the building.

Yablon also discovered that few other scholars had looked into time capsules. Though no archive is neutral, and all are constructed around the priorities, narratives, and ideologies of those who purchase and organize the materials, time capsules are archives that deliberately call attention to the processes of selection and preservation and the ideologies that inspired both. Many early-20th-century time capsules, such as the 1907 Paris Opera capsule or the famous 1939 Westinghouse time capsule, were created by companies that wanted to call attention to their products not just as a critical part of the present, but as a valuable resource for the future. Likewise, many time capsules included material objects like clothing and photographs, which, in the early 19th century, “violated the emerging tenets of academic history,” as Yablon phrases it in his book, and were not then considered appropriate avenues of scholarly inquiry. “I think for that reason historians have avoided using [time capsules],” Yablon told Perspectives, “if they knew about them at all, because of this notion that we are meant to be using untended archival material . . . not intended sources, deliberately constructed collections for future historians.”

Sometimes the diversity of media materials that time capsule contributors thought would be useful for future historians hindered Yablon’s understanding rather than aided it—such as when Yablon came across phonography cylinders from 1901. “Researchers couldn’t directly use those wax cylinders,” he told Perspectives. “They were quite fragile.” Archivists had to carefully extract the music for anyone who wished to hear them. Wax cylinders weren’t the only unusual items Yablon came across in his research. San Francisco-based dentist Henry D. Cogswell’s 1879 time capsule—which Cogswell called a “great Antiquarian Postoffice [sic]”—included “a box of breath sweeteners, a mechanical pencil, a souvenir pen and bud vase from the Centennial Exposition, a silk bookmark, a wooden puzzle, a paperweight . . . and, presumably Cogswell’s own contribution, some false teeth.” In an interview with Perspectives, Yablon said that, while researching the book, he also came across a piece of “corn on the cob in an Oklahoma time capsule [from] 1913.” (“It was in fairly good condition,” Yablon added.)

Sometimes the diversity of media materials that time capsule contributors thought would be useful for future historians hindered Yablon’s understanding.

Sometimes the method of keeping the time capsules safe against the threatened apocalypse likewise backfired. Though Yablon told Perspectives he had good luck with materials from earlier time capsules, he credits that to the fact that early time capsules weren’t buried underground, as is the contemporary trend. Burial “is the worst thing you can do with a time capsule,” Yablon says. “Water seeps into it. The container erodes and decays.”

Burial “is the worst thing you can do with a time capsule,” Yablon says.

The most famous contemporary time capsule, the Time Capsule Program of Japan's National Institute for Environmental Studies, is buried underground-in a manner of speaking. As Yablon writes, "specimens (or DNA samples of) plants and animals that are endangered by climate change, pollution, biotech monoculture, and human activities" were buried "sixty-five feet into the Antarctic ice to help scientists in the year 3000 research climate change or resuscitate species." This Time Capsule Program's focus is less on curation of the past than conservation of the life endangered by the present, mirroring the apocalyptic concerns of the 1910s that first drew Yablon to the topic. Yablon worries, however, that projects like these, "might encourage public complacency or a sense of having done enough for posterity and thus thwart efforts to tackle climate change itself."

Other contemporary time capsules speak more to Yablon's concerns and seem to wish to instill a sense of posteritism, a word invented by Louis Ehrich in his 1901 address when burying a "century chest" in Colorado Springs. Ehrich defined posteritism as "a sacred regard for the highest welfare of posterity." Artist Katie Paterson's 2014 Future Library is a project very much in line with this idea. The Future Library, writes Yablon, "consists of unread book manuscripts submitted by one author each year" as well as "a thousand trees in a nearby forest (on inalienable public land) to supply the paper for these publications" in 2114-thus neatly avoiding the problems of preservation and transmission Yablon found with wax cylinders or buried items and instilling in generations of eager readers the necessity of ecological and not just material preservation.

"There are still possibilities in this idea of a time capsule," says Yablon, "that artists and environmentalists could promote a certain duty to prosperity and so on. There's still a lot of use in time capsules, I believe."