What’s in the December AHR? 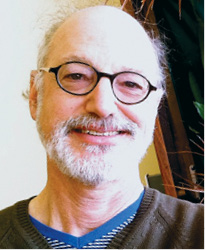 When members open their December 2014 issue of the American Historical Review, they will find two articles, one on human rights and indentured labor, the other on science and modern enchantment, along with an AHR Roundtable, “History Meets Biology,” consisting of 10 essays. There are also five featured reviews, along with our usual extensive book review section.

In “Indian Indentured Labor and the History of International Rights Regimes,” Rachel Sturman examines the British imperial system of Indian indentured labor, established in the aftermath of the abolition of slavery. It is, she asserts, a prime context in which modern state agencies both articulated and sought to implement a system of labor regulation, one with potentially transnational or global reach. Her work here speaks primarily to two scholarly fields. Studies of the history of international labor rights typically focus exclusively on the struggles of European activists (trade unionists, socialists, and social workers) to achieve legal recognition of workers’ right to minimum conditions of safety and welfare. Sturman suggests that including the imperial history of indenture within a genealogy of international labor rights illuminates the ways in which a welfare orientation also emerged through expansive forms of state power seeking to regulate—but not to dismantle—a coercive labor regime. At the same time, the piece is in step with recent scholarship on the history of indenture that has moved beyond a preoccupation with how it essentially reproduced the conditions of slavery. Instead, Sturman develops recent arguments regarding modern forms of state sovereignty, showing how a critique of the indenture system gave rise to the idea that humanitarian violations could be addressed with pragmatic and minute regulations of the conditions of life and work. Ironically, she asserts, the anti-indenture movement that eventually succeeded in abolishing the system, which was led by Indian nationalists in the early 20th century, ultimately moved away from a more searching, overarching critique of what constituted legitimate and humane forms of labor.

In “Seeing Things: Science, the Fourth Dimension, and Modern Enchantment,” Christopher White follows in the footsteps of recent scholars who have begun to reexamine the link between religious doubt and modernity. He examines how scientific modernity sometimes fostered unexpected forms of religious belief and enchantment by looking at mystics, mathematicians, and religious believers who borrowed the idea that the universe incorporated a higher “fourth dimension.” The article focuses on the life of the British mathematician Charles H. Hinton to illustrate how people moved from uncertainty to more affirmative philosophical and religious positions. As Hinton saw older sources of certainty collapse, he developed a new system for reeducating the senses that allowed people to see into the boundaries of existence and beyond these boundaries into a higher dimension of reality. Hinton and others popularized these ideas, and many intellectuals, artists, writers, and religious seekers used them to recover an imaginative sense for the supernatural. Though cagey scientists complained that cranks and visionaries were misusing scientific ideas, even they were sometimes excited by the freedoms that the fourth dimension made possible. In the end, the idea of the fourth dimension did imaginative work for a range of people who felt that scientific materialism had imprisoned them in ironclad spaces devoid of human feeling, imaginative freedom, or spiritual transcendence.

The Roundtable in this issue—developed through the combined efforts of the AHR editors, former Board of Editors members Philip Ethington and Daniel Lord Smail, and the authors—explores the possibilities opened for historians by recent developments in biology, especially human biology, for the study of history, environmental history, health history, and the coevolution of humans and other species. As laid out in the introduction, today’s biologists are attentive to the plasticity of the human mind and body, and to the power of historical circumstances to alter the physical, mental, and behavioral qualities of individuals in ways that cannot be predicted or determined by genes alone. Human history and “natural” history are thus intertwined. Neither can be understood without the other.

In the first essay, “The Nurture of Nature: Genetics, Epigenetics, and Environment in Human Biohistory,” John L. Brooke and Clark Spencer Larsen assert that appreciating humanity as a biological species requires that historians come to an understanding of human genetic history. Stressing the distinctions between genetic code imprinted on DNA and the epigenetic chemical regulation of that code, they propose that our biological makeup is both relatively fixed and dramatically malleable. There is indeed a wide range of “plasticity” within the genetic inheritance: human bodies have responded to the stresses of work, climate, and malnutrition by developing a range of forms. Dietary and psychological stress from famine, social stratification, and slavery, for example, must have had powerful intergenerational effects on historical populations. Substantiating such arguments, the authors assert, is a critical agenda for a new biohistory.

“Coevolution” refers to the process by which two populations shape each other’s traits. In “Coevolutionary History,” Edmund Russell adds a historical component to this concept. Coevolution, he argues, helped spawn the agricultural revolution, increase human power, and usher in the Industrial Revolution. The resulting increase in food supply made an explosion in human populations possible; human numbers have multiplied sevenfold over the past 200 years.

Historians and social scientists have discovered recurring patterns in homicide trends among unrelated adults in the early-modern and modern world that correspond broadly with the success or failure of efforts at nation building. In “Emotions, Facultative Adaptation, and the History of Homicide,” Randolph Roth acknowledges that these patterns can be explained using the methods employed by social and cultural historians. But he argues that a more complete explanation will depend on integrating those explanations with biological explanations, which indicate that humans, like all social animals, respond physiologically to changes in their social environment.

Kyle Harper, in “The Sentimental Family: A Biohistorical Perspective,” explores how the biological study of human behavior can help answer questions that historians have traditionally asked about the family and its reproduction. The hormonal mediation of human behavior should be of particular relevance to historians, who are interested in the ways environment shapes human behavior. The study of classic phenomena, like the rise of the sentimental family in the modern period, might be reconsidered from a perspective that does not preempt the possibility of engagement with biology. Ultimately, a paradigm open to biological concepts may offer critical insights for biologists, whose contemporary subjects are the product of history.

Is human social behavior shaped by specific biologically inherited traits? This is the question posed by Walter Scheidel in “Evolutionary Psychology and the Historian.” Scheidel focuses on the avoidance of procreative sexual relations with close relatives as a promising example of an evolved mechanism that meets this stringent criterion. Research has focused on “natural experiments,” in which unrelated individuals were raised in kin-like conditions, and the effects of those conditions on sexual attraction and mating preferences. The evidence strongly suggests the existence of evolved avoidance behavior, which illustrates how human behavioral plasticity is constrained by human biology.

Historians have long been allergic to psychological explanations. As Lynn Hunt notes in “The Self and Its History,” this resistance developed in part in reaction to right-wing uses of crowd psychology in the late 19th and early 20th centuries to denigrate popular movements. Despite many reasons for caution, however, a dialogue with neuroscience offers the prospect of new approaches to such perennially vexed issues as agency, experience, action, and identity. The historical study of emotions converges in interesting ways with neuroscientific emphasis on the role of emotions in reasoning and the development of the self.

The climate crisis, in altering our view of the future, alters our ideas of the past and the role of the human subjects within it. So asserts Julia Adeney Thomas in “History and Biology in the Anthropocene: Problems of Scale, Problems of Value.” Facing this predicament together, biologists and historians can learn from one another in ways that will stretch our disciplinary boundaries. But consilience is neither possible nor desirable, Thomas insists. In the end, she concludes, what is most threatened on our rapidly warming planet is not our fragile physical bodies but our even frailer hopes for decency, justice, playfulness, and beauty.

The Roundtable concludes with two comments, one by a scientist, the other by a historian. In “Historical Inquiry as a Distributed, Nomothetic, Evolutionary Discipline,” Norman MacLeod, a paleontologist, argues for closer collaboration between the disciplines of biology and history, not only because recent advances in scientific fields that investigate aspects of evolutionary processes have shed light on human history, human biology, and human psychology that is of interest to historians, but also because the study of human history forms the end point of a conceptual continuum that unites all historical studies in a seamless and mutually reinforcing manner.

The last word is given to Michael D. Gordin, a historian of science. In “Evidence and the Instability of Biology,” he explores what the changeable, unstable nature of contemporary biological knowledge implies for how historians might use such evidence as a reliable foundation. His essay concludes by underscoring the difficulty for outsiders in determining the “consensus” view in a particular scientific field.

February’s issue will include the Presidential Address that Jan Goldstein will deliver at the annual meeting; articles on human-animal relations in early Latin America, American genocide, and Benjamin Franklin’s The Way to Wealth; and another edition of the AHR Conversation on how historians today understand historical change and transitions. 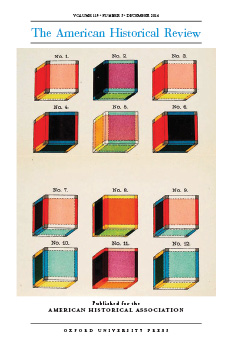 Views of the Tesseract.” From C. Howard Hinton, The Fourth Dimension (London, 1904). The word “tesseract,” defined by Merriam-Webster as “the four-dimensional analogue of a cube,” was coined in 1880 by British mathematician Charles Howard Hinton. After experiencing a paralyzing crisis of anxiety and doubt, Hinton constructed sets of marked and colored wooden cubes and memorized them in different configurations in order to establish a range of things he could know with certainty. He stacked these cubes into composite blocks, memorized all the edges, points, and sides of the cubes in a block, then rotated the block and memorized all the locations again. In the process, Hinton came to believe it was possible not just to develop accurate perceptions of objects in the world but also to see beyond our three-dimensional world into a higher dimension. In “Seeing Things: Science, the Fourth Dimension, and Modern Enchantment,” Christopher White shows how Hinton and other fourth-dimensional enthusiasts used scientific concepts to see beyond scientific materialism and develop new forms of religious enchantment and wonder.