The AP US History Wars: Is a Peace Process Possible?

The History Wars are back. At issue is the new framework for the Advanced Placement US history program. One recent skirmish pitted conservatives on the Jefferson County, Colorado, school board against a vocal group of teachers and students in their school district. If the heated rhetoric is typical of what is to come, we are in for a lot more fireworks that will be of little value to teachers, students, the public, or the Advanced Placement program itself.

This is sad, because valid criticisms of the new AP framework do exist. The danger is that they will be drowned out by ignorant ranting versus defensive indignation. Conservatives see the new framework as an ideologically driven left-wing assault on any notion of American exceptionalism. The framework’s defenders depict critics as ignorant right-wingers calling for patriotic storytelling and consensus history. In response, the AP program may feel smugly content to dig in its heels and ignore the real problems it needs to confront.

At issue is the framework’s Concept Outline, which spells out concepts and trends AP teachers are expected to cover. It replaces a shorter AP chronological listing of events with a longer outline describing broad trends and patterns. Factual details are left to teachers to supply. Will this promote more in-depth learning, or does it subtly shoehorn ideological bias into the curriculum? That’s the question at the heart of this debate. While many attacks from the right have been exaggerated, legitimate problems with bias in the framework do exist. The AP program would be wise to address them—and in doing so, it could well improve its guidelines substantially.

Stanley Kurtz is one conservative critic whose views are quite ominous in tone. At first, Kurtz focused on the backgrounds and political leanings of the AP framework’s creators, accusing them of internationalizing US history in order to weaken any sense of American identity and loyalty (bit.ly/13pnZyH). Later he made broad charges about the framework itself, claiming it would straitjacket teachers, rendering them no longer “free to present US history from a variety of perspectives” (bit.ly/1vpzeh0).

Aside from exaggerating the framework’s likely impact, this attack fails to recognize its admirable promotion of historical thinking skills—the discussing and weighing of alternate interpretations of the past, investigating sources through close reading, contextualizing sources, analyzing source reliability, and corroborating sources. The framework stresses these heavily, though not in the outline Kurtz dwells on.

Unlike Kurtz, Ronald Radosh focuses on the framework’s substance—in meticulous detail, and especially when it comes to its treatment of the 20th century (bit.ly/1vpzrRq). His criticisms merit close attention. He makes the case that the framework’s outline often encourages a single, selective interpretation of many issues about which historians themselves disagree. Its tepid but positive language regarding the New Deal, for example, glides over deep divides among historians about that era. Its description of the Progressive movement avoids mention of its ambiguities and negative aspects, such as the nativism or racism of many of its proponents. 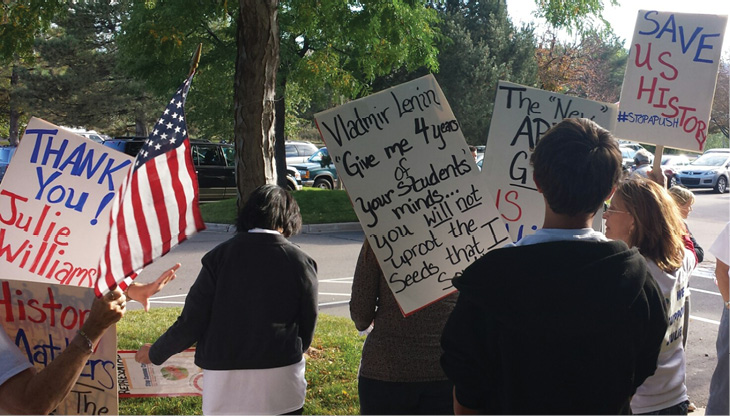 Supporters of the Jefferson County, Colorado, School Board stage a counterprotest to “stop APUSH,” October 2014.

We might also consider other eras that Radosh does not address. The framework’s descriptions of post–Civil War industrial capitalism are uniformly bleak. The 1865–98 section contains a “Key Concept” which tells us that a tiny few in the cities enjoyed lives of “conspicuous consumption” while others lived in “relative poverty.” This view is not qualified in any real way elsewhere in the section. Here, one might ask: Was there not also a growing middle class in America’s cities living comfortably, but not conspicuously or extravagantly? Were there no businessmen who lived modestly and paid decent wages—and who did not adhere to Social Darwinism? Were all workers impoverished, relative to the small group of “conspicuous consumers” at the top? Real wages in general rose modestly in industrializing societies from 1850 to 1900. Was this not a radical change in human history, one also worth exploring? Plenty of socialists themselves acknowledge this phenomenon as one reason America never developed a strong socialist alternative to capitalism.

Along with his criticisms, Radosh hints at a solution—one thoroughly consistent with the AP’s own recommended approach to teaching history. Radosh advocates for understanding history as a contested field, where competing interpretations clash and students need to evaluate and compare them. Far from calling for a single, feel-good consensus narrative, Radosh and other critics like him want AP to live up to its own vision of history as something contested by encouraging teachers to teach the controversies.

For example, why not make clear in the framework’s outline that there are varying assessments of Ronald Reagan’s role in ending the Cold War? This would not be difficult to do. Compare the following approaches:

My alternative version: President Reagan spoke out forcefully against the Soviet system and promoted a military buildup to more firmly confront Soviet military power. Once the Soviets appointed reform-minded leader Mikhail Gorbachev, Reagan worked with him cooperatively to achieve arms reductions and to support his efforts to reform Soviet society. Historians still vigorously debate Reagan’s role in containing Soviet power. Some see him as needlessly confrontational. Others view his strong stance as a key factor in ending the Cold War.

As Radosh indicates, this balanced approach occasionally can be found in the framework—for instance, in a lengthy essay assignment on the New Deal. If the College Board wants to avoid a culture war showdown, it should look to incorporate into the framework some of the multiple perspectives it wants students to analyze. To its credit, the College Board does seem open to making such changes (wapo.st/13pon02). This is a hopeful sign.

For Nicholas Gallagher, the framework’s bias is not as big an issue as its flawed approach to the problem of breadth versus in-depth investigation (bit.ly/1vpA0dQ). The AP history programs have always sought to balance detailed, content-rich coverage with a stress on discussion, interpretation, close reading of sources, and historical thinking skills. It’s hard to do both at once, especially considering how little US history students get before they arrive in the AP class. The survey pressures often crowd out historical thinking. The new framework tries to get around this by stressing broad, conceptual themes instead of detailed factual content. In doing so, Gallagher fears it will fail to develop the rich content background students need if their interpreting is to go beyond expressing half-understood generalities.

Many on the right are taken aback by the outline’s failure to mention Ben Franklin or James Madison. In fact, it also fails to mention Martin Luther King Jr. This relentless depersonalizing of history does have a rationale. Still, we may wonder whether the result really is history, as opposed to a kind of sociology of the past. How the outline gets through its section on World War II without a mention of FDR, Churchill, Hitler, or Stalin is somewhat of a wonder. The College Board does expect teachers to include such figures as each teacher sees fit. That’s fine. Yet if the framework’s depersonalized approach dominates, it may still make it hard to convey any sense of human agency in history, or of the drama and challenges central individuals in the past had to confront.

Gallagher’s concerns should give pause to those battling over AP’s ideology, including those AP authors themselves who seek an international reframing of American history. They may all be living in a fantasy world. Kids encouraged by the framework’s conceptual survey to skate across the surface of US history are likely to assimilate details they pick up into their own ideological perspectives, even as teachers bring theirs to bear in often half-thought-out ways. My guess is that the AP approach will lead to very little effective propagandizing of students—or consciousness-raising, depending on how you view it.

Unless the College Board responds to these legitimate criticisms more effectively, we are likely to see more incidents like the one in Jefferson County, Colorado. Even worse, many states and local systems may simply respond to this new round in the history wars by abandoning the battle entirely. That is, to avoid such dramatic clashes, they could decide to further reduce history in the curriculum or eliminate it entirely, including their AP history programs. Such an outcome would be tragic. If the AP program engages with critics in a meaningful way, it is a tragedy that can yet be avoided.

Jonathan Burack is a former teacher who has been producing history curriculum materials for K–12 schools for more than 30 years.

More Viewpoints on the US
AP History Revisions

The AHA’s official statement in support of the revised US AP History exam is at bit.ly/11igVDd.

James Grossman, “The ‘Proper Study of History’: What the Public Thinks about Historical Thinking,” Perspectives on History (October 2014), bit.ly/1xNtNv0.