Teaching the 1915 Armenian genocide in post-9/11 America is not an easy matter, and it should not be. Handled carelessly, it can turn into what it was not: Muslims gone wild. As a historian of the modern Middle East I cannot imagine a worse outcome, one that perpetuates the stereotypes against which our subfield is obliged to fight.

Taking the recent debate between Murat Yaşar and Alice Whealey in Perspectives on History as my starting point, I will offer some thoughts on how that exchange illuminates the unspoken challenges Middle East specialists face in today’s classroom. What happens when our historical actors act in a way that might appear to confirm students’—and American society’s—stereotypes of certain groups? How can we destabilize orientalizing, Islamophobic tendencies even when we speak of, for instance, violent events in which Muslims were the perpetrators and non-Muslims their victims?

In his September 2013 essay titled “Teaching Middle Eastern History in North America: Challenges and Prospects,” Murat Yaşar first defined a problem: students have stereotypical perceptions of Middle Eastern peoples (camel-riding bearded men, veiled women), and they imagine the region as a monolith that does not change. Given the fact that recent events such as the September 11 attacks and the Arab uprisings have propelled student interest, we have an opportunity, Yaşar maintains, to tackle the problem of stereotypes and turn political conflicts into teachable moments. One of the four major ways he tackles the issue is by highlighting historical cases, conditions, and events that delegitimize such prejudices. An example he uses is the Ottoman Empire’s millet system (Ottoman management of ethnoreligious diversity) which, as he puts it, shows the students “how an Islamic empire promoted religious tolerance and allowed many different cultures and languages to flourish under its rule, contrary to the widespread notion of Muslims being extremely intolerant of others.” Alice Whealey objected to this point in a December 2013 letter to the editor, “On Teaching Middle Eastern History.” Citing the evidence of the Christian intellectual and demographic decline under Ottoman rule in Anatolia, she countered that “survival is not the same as flourishing” and in premodern empires the “extreme intolerance” that Yaşar found absent had not been needed to drastically reduce or even eliminate subordinate populations.1 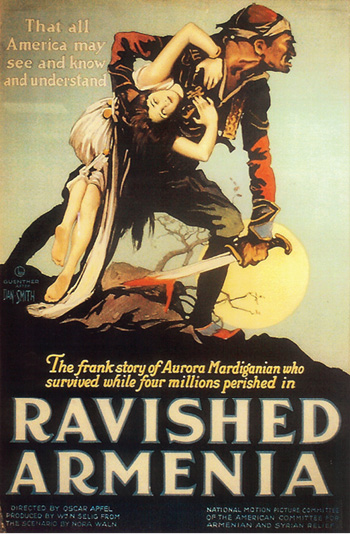 The poster of the 1919 US-made film Ravished Armenia that depicted the tragic experiences of the survivor Aurora Mardiganian. When covering the Armenian genocide, teachers can alert students to orientalist tropes in such representations (Turkish barbaric abduction of innocent Christian maidens) as well as the fact that abduction of Christian women constituted an integral part of the Ottoman Turkish campaign to eradicate Armenianness. Fine-tuning that balance is the challenge of teaching instances when “Muslims killed Christians.” See Lerna Ekmekcioglu, “A Climate for Abduction, A Climate for Redemption: The Politics of Inclusion during and after the Armenian Genocide,” Comparative Studies in Society and History 55, no. 3 (2013): 522–53.

This is an important debate because it reflects an unstated tension in our discipline, one that is a consequence of how the trajectory of our subfield intersects with recent history, including but not limited to 9/11 and the history of United States wars and alliances in the Middle East. Rising Islamophobia bothers Middle East historians in different ways because we have a history of not only studying (and experiencing) the “region” and “Muslims” but also because of the Western (mis)representation of Islam, its people, and its geography. When we face post-9/11 American students, we feel obliged to “clean up” their minds because we know that those minds come equipped with “stuff” that needs to be unlearned. Unlearning is a defining praxis of our field.

I have also recognized a tendency toward the other extreme, which we might call Islamophilia. I might have erred on this other extreme myself. In my “Women and Gender in the Middle East” class, how many times did I find myself “defending” Islam against Ayaan Hirsi Ali or Half the Sky? It is an error easy to make because the worsening political situation on the ground can put a sound Middle East historian on the defensive. Yet this is a pedagogically futile tendency. Therefore we need to recognize it first and then find ways to avoid it. One of the many dangers of Islamophilia is that it can lead us, consciously or unconsciously, to overlook or elide historical events that might potentially (if treated uncritically) confirm stereotypes. The Armenian genocide provides an excellent example. It constitutes “extreme intolerance,” perpetrated by Ottoman Muslims against Ottoman Christians. This disturbing truth need not be avoided. Rather, it contains a pedagogical solution to the problem identified by Yaşar.

I agree with much of Yaşar’s essay, except for the examination of the Ottoman millet system. What he misses is of critical importance: the hierarchical organization of religious groups (Muslim superiority, non-Muslim inferiority) and sexes (male supremacy, female subordination) remained at the core of this system. When we attribute an anachronistic, modern understanding of “tolerance” to Ottomans without properly historicizing Ottoman structures, we create a false moral benevolence. In reality, the millet system’s construction of tolerance effectively meant “being tolerated despite one’s defects”—in this case, lack of submission to the right faith. Moreover, there were concrete reasons for imposing tolerance. Toleration in a multi-religious empire afforded benefits such as the efficient regulation of different communities, sustained peace, and loyalty from non-Muslim populations, all enabling the state to better squeeze out resources from diverse communities.2 Apparently, however, this explanation, which is now well-accepted by Ottomanists, has not yet made it to the mainstream of the field. After reading the treatment of Ottomans in William Cleveland and Martin Bunton’s classic textbook—including a section on the devshirme system (the levy of Ottoman Christian boys for Islamization and future state service) that ends with a note that “the Ottoman slave system offered limitless opportunities to the young men who became part of it”—students cannot help but admire the Ottomans.3 This is not a good learning outcome. We don’t have to like Ottomans or hate them. The way they were had consequences, and this is why we study them.

I do not know how Murat Yaşar treats instances of late-Ottoman sectarian violence, which culminated in genocide, but Cleveland and Bunton’s book minimizes its scope and effects. The one-paragraph discussion of “the notorious operations against the Armenian community” begins with assertions that Armenians provoked the Ottoman state and ends by chastising the survivors who have been asking for accountability: “It would be pointless to enter the debate that rages today between members of the Armenian community in Europe and the United States who accuse the Ottomans of genocide and the Turkish government, which insists that the excesses have been overemphasized. Any episode in which as many as one million civilians may have lost their lives is an appalling one, whether it is calculated or the unintended result of internal security measures.”4 I wonder whether the textbook would have covered the issue the same way had the Ottoman state not been Muslim.5 Framing this historical moment in terms of “accusations” and “debate,” given the substantial scholarship on the genocide, does a disservice to students.

Teaching about moments when “Muslims killed Christians” can in fact offer excellent opportunities for training students in historical thinking, something without which they can’t really question their and their society’s biases about people whom they don’t know and a place they have never visited. In my experience, the application of the five Cs of historical thinking—change over time, causality, context, complexity, and contingency—to the case of the Armenian genocide leads to effective results.6 If the reason for violence was “Islam” or the violent nature of the Middle Eastern people (such as “Turks”), why didn’t Muslims kill non-Muslims earlier or force them to convert? Why weren’t Ottoman Jews killed? Why were Ottoman Armenians, Ottoman Assyrians, and Ottoman Greeks—all non-Muslim, Christians—targeted for violence to different degrees in this period? How would this argument account for Muslims who refused to kill anyone? How about Muslims who were killed by other Muslims? Why were some Muslim groups (Turks, Kurds, Circassians) more involved in the violence than other communities of Muslims (such as Alevis and Arabs)? Why don’t we think of the Holocaust as Christians killing Jews, but instead we talk of Nazis killing Jews and others? Why is the United States not pressured by “the international community” to apologize to the Native Americans and pay restitution, but Turkey is? Why don’t we call slavery genocide? What is at stake in the Turkish state’s rejection of the label “genocide”?

Not every class will have time to tackle all of these issues, but sometimes the questions themselves are enough to alert students to the important nuances. In the end, if they stop thinking of religion as a primordial category and instead think of it a response to contingency, and if they recognize how the intersection of synchronic and diachronic factors with some individual choice brought about a catastrophic end to Christianity in Anatolia, I consider myself successful. Armenians were not killed solely because they were Christians, but they would not have been killed had they been Muslims or Jews. When and if students get this, I am relieved.

1. Yaşar and Whealey continued to correspond on the Perspectives website.

3. William Cleveland and Martin Bunton, A History of the Modern Middle East (Westview Press, 2009, 4th ed.), 46. This is one of the main textbooks used in North America to teach the modern Middle East. I don’t deny that the devshirme offered opportunities to young men, but when this is emphasized at the expense of the violent nature of the practice, the issue becomes problematic.

5. It has to be emphasized that an equally important reason why Middle Eastern history as practiced in the US continues to omit the Armenian genocide or minimizes its consequences pertains to the Turkish state’s official approach to the topic, which is the refusal of defining “the 1915 deportation” as genocide. Moreover, since the early 1980s the Turkish state has spent intensive efforts to construct the issue in the US as a “debate” or “controversy.” Jennifer M. Dixon, Changing the State’s Story: Continuity and Change in Official Narratives of Dark Pasts, unpublished PhD dissertation, University of California, Berkeley (2011), 99–103, 146.The Turkish state and its supporters abroad have increasingly sought to penetrate academia with the approach that the Armenian genocide is a subject over which reasonable scholars can disagree on even basic facts and that those who disagree with “debating” are attempting to “close down the discussion.” See Marc A. Mamigonian, “Academic Denial of the Armenian Genocide in American Scholarship: Denialism as Manufactured Controversy,” Genocide Studies International 9, no. 1 (forthcoming).