Beyond the “Seven Speak-Nots”: History Education in China

In 2012, when the Hong Kong government planned to implement “patriotic education classes,” thousands of students protested, and the plan was abandoned. Students in Hong Kong came out again in September of this year, this time for universal suffrage. “Students are seen as intellectuals in the making, and intellectuals are seen as having a particular role to serve as the conscience of the nation or the community,” University of California, Irvine, historian Jeffrey Wasserstrom told Zack Beauchamp in an interview for Vox.1

Among the restrictions on intellectuals in China listed in this year’s Network of Concerned Historians report is a secret memorandum titled “Concerning the Situation in the Ideological Sphere,” which in “2013 banned teaching or discussing seven topics at universities, including ‘historical mistakes by the Communist Party’ (such as the Cultural Revolution of 1966–76 or the 1989 Tiananmen Square massacre). Other banned topics were Western constitutional democracy, universal values of human rights, freedom of the press, civil society, the privileged capitalist class, and judicial independence,” according to the report. The banned topics were dubbed the “Seven Speak-Nots” in human rights reports.

The Network of Concerned Historians report also discussed the detention of two professors: from July 2013 to January 2014, a professor of history and international relations was detained in Shanghai over his research on Sino-Japanese relations, and another historian was detained for 17 days in March 2014 for his research on Muslim minorities in China. The report also mentioned that an American professor with a valid visa was denied entry to China at the Beijing airport. Western newspapers covered the ban and detentions of scholars. Headlines in the New York Times included “China Takes Aim at Western Ideas” and “Look Who’s Afraid of Democracy.”

Ironically, the situation in China has improved in the last decade, three historians of China said. For example, the curriculum for middle school and high school history was revised in the 1990s and again in the early 2000s, giving cities and provinces choices in which textbooks to use. The high-school textbooks are divided into three parts dealing with political history, economic history, and cultural history. One of the textbooks that schools can choose to assign is titled Democratic Thought and Practices in Modern Societies. The curriculum focuses on developing student abilities in three areas: knowledge and skills; process and methodology; and emotion and values. This new curriculum was inspired by the 1996 American history curriculum developed at UCLA. According to Biao Yang, associate professor of history at East China Normal University in Shanghai, the history curriculum was changed so that it no longer asked “how” but rather “why.” 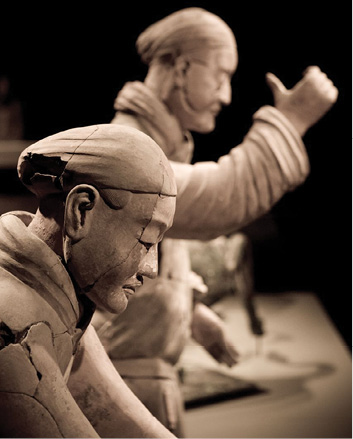 Terra-cotta warriors created about 2,200 years ago to accompany the first Chinese emperor in the afterlife, on display in a special 2009 exhibit at the Houston Museum of Natural Science.

Di Wang, professor of history at Texas A&M University, also spoke of the change in the history curriculum as a positive development, especially for its inclusion of cultural history, which was not part of the previous curriculum. At the college level, professors design their own courses, but all college students are required to take a course on Chinese history using the textbook A Brief History of Modern China. This is the government’s “official” history of China—and to some students, it is the history that tries to prove the legitimacy of the Communist Party of China. Students also critiqued the course as not reflecting new scholarship, which shows their awareness of other narratives about China’s history.

Wang noted that areas outside of Chinese history, such as the history of ancient Egypt, medieval Europe, and early America, are approached as they might be in the West. Additionally, students have access to many books about areas of Western history that are considered problematic by the government, so even if students are not taught about democracy in school, for example, they might read about it outside of class.

The subjects that are hotly debated—and which have been taken out of the curriculum—are those relating to national heroes, class struggle, and Sino-Japanese relations. But these topics are discussed in academic circles, if not in the public sphere as well. Most recently, Wang Weiguang, president of the Academy of Social Sciences, published an article about class struggle that caused a stir in China.

Rana Mitter, professor of the history and politics of modern China at the University of Oxford, also said that access to archives and documents has improved in the past 30 years. There are certain topics that are difficult to write about in China—for example, the history of the Communist Party—but more and more topics that used to be taboo are now mainstream. “China has developed a more open public sphere as part of the process of globalization,” Mitter told me in a phone interview. “China is much more in the world, and the world is much more in China.”