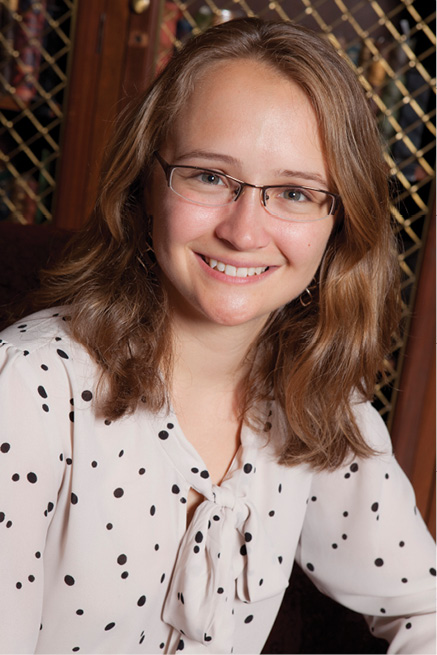 The AHA is delighted to welcome its new associate editor of web and social media, Stephanie Kingsley. Originally from Atlanta, Georgia, Stephanie first took an interest in history in high school, when she started researching genealogy and collecting antique books found in her grandparents’ attics. This passion has only grown over time, and Stephanie sees her work at the AHA as the culmination of those early hobbies.

Graduate studies at UVA were a turning point for Stephanie. She studied American literature (particularly 19th-century novels) and discovered the fascinating disciplines of bibliography and textual studies. She spent a significant portion of her time in graduate school pouring over holdings at the Albert and Shirley Small Special Collections Library. She wrote on such treasures as the ninth-edition Bay Psalm Book. (This book contains the first musical notation printed in New England; the Small Library holds one of only two surviving copies.) She also examined manuscripts of novels by James Fenimore Cooper and typescripts of works by Virginia author Ellen Glasgow. For her thesis, supervised by English professor David Vander Meulen, Stephanie prepared a critical edition of a chapter from Cooper’s 1840 historical novel, Mercedes of Castile. She worked for a year at Rare Book School, an organization in Charlottesville, Virginia, that hosts summer courses on book history. There she improved her bibliographical skills and learned about archival practices; a fellowship with RBS enabled her to transform her thesis project into an interactive digital edition.

Studies in book history soon led Stephanie to participate in more historical archival projects. She spent a semester working at Documents Compass, a nonprofit organization affiliated with the Virginia Foundation for the Humanities, which helps scholars prepare digital editions. Stephanie worked specifically on People of the Founding Era; this project organizes biographical records of founding-era people in a searchable database and reveals networks between them—networks commonly called “prosopographies” in humanities scholarship. Stephanie researched communities of slaves who built, lived, and worked at the University of Virginia campus from the beginning of its construction in 1817 through the end of the Civil War. She also worked for a brief period doing research and managing social media at the Papers of George Washington, an organization that produces documentary editions of Washington’s correspondence. Both of these projects fueled her interest in history beyond the history of the book.

The University of Virginia also introduced Stephanie to the field of digital humanities. In addition to book history, Stephanie set out to learn as much about this burgeoning new discipline as possible in her two years at UVA. During that time, she worked on digital prosopography (People of the Founding Era and Professor Alison Booth’s Collective Biographies of Women), conducted digital textual editing projects, and was a Praxis Fellow in the UVA Scholars’ Lab.

The Praxis Program is a yearlong fellowship that trains humanities graduate students in collaboratively planning, designing, developing, and managing a digital project. Scholars’ Lab faculty and staff instruct fellows in wireframing, programming languages, and project management. Stephanie served as her cohort’s project manager; she prioritized, coordinated with different members of the team, publicized the group’s progress via the blog and social media, and acted as the primary spokesperson for the project.

In her new role as the AHA’s web and social media editor, Stephanie will manage content for the blog AHA Today and for the association’s website. She will also let our members and readers know about exciting developments at the AHA through social media. Stephanie plans to blog and tweet from symposiums, exhibits, lectures, and other historical and cultural events in the DC area. She sees her profession as using digital means to pay homage to the past, and she plans to continue inhaling the smell of physical books while tinkering on the computer. This is a lifelong mission, and Stephanie looks forward to continuing it with the AHA.