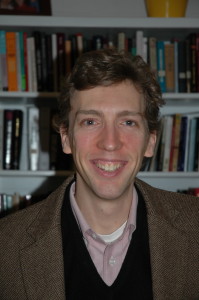 David Komline is a doctoral student at the University of Notre Dame. He lives in Holland, Michigan, and has been a member since 2013.

I have enjoyed studying history ever since middle school, but I did not decide to major in it until after my first year in college. Reading Simon Winchester’s The Professor and the Madman that summer gave me the idea that I could encounter similarly engaging narratives in history classes. I have not revisited the book since then, so I don’t know what I would think in light of my more recent historical training, but I am thankful that it inspired me to start down this path.

I am working on my dissertation, “The Common School Awakening: Education, Religion, and Reform in Transatlantic Perspective, 1800-1848.” A lot of people know about Horace Mann and his reform efforts in Massachusetts. But Horace Mann’s appointment as secretary of the board of education represented the conclusion of a long campaign, the details of which my dissertation describes. Looking at education from this angle turns our attention away from economic factors and towards the overlooked impact of examples from abroad, especially of schools in which Christian clergy and teaching played a central role, for example in Prussia. In urging their states to emulate the professionalized and systematized schools they found across the Atlantic, American reformers hoped to Christianize not only their schools, but also their country.

Have your interests changed since beginning graduate school? If so, how?

I started my master’s program with a strong interest in American religion. Since then I have narrowed my focus to my dissertation topic but also broadened my interests which now include education and transatlantic exchanges. A year that I spent in Germany on a grant from the DAAD between finishing my master’s and starting my PhD played a big role in developing the second interest. As a result, I returned to Germany last year to conduct research for and draft my dissertation, this time as a Fulbright Fellow.

Last semester I taught a class called “The Beechers: Revival, Reform, and Literature in 19th Century America.” We started the class by reading Harriet Beecher Stowe’s The Minister’s Wooing. Students loved it, and it was also a great way to set the stage for the changes that would occur as the nineteenth century developed. In general I really enjoy reading literature related to the people and movements that I am studying.

I still marvel at the fact that a university is paying me to be a PhD student, giving me the opportunity to read and write about subjects that I find fascinating. I have also enjoyed interacting with students, first on my TA assignments and more recently as an adjunct instructor. While I do hope to get a tenure-track job eventually, for now I am grateful that I have spent six years doing what I love without accumulating any debt.

I joined the AHA in order to attend an annual conference. This year I am on the job market, so I am using the AHA’s resources in my search.

As a junior scholar, I have been struck by the generosity that more senior scholars have demonstrated at the AHA. At the AHA in New Orleans I went out with a group of mostly graduate students and a couple of people a little more advanced. One of them left a little early because he had to present first thing in the morning.  When I went to pay my bill about an hour later I was told that he had already taken care of it. Thus in addition to spending one of his evenings at the biggest conference of the year hanging out with lowly graduate students, he had paid for us!

Most of my passions find their way into my historical interests, so this one is tough. But something completely unrelated is sports. I ran competitively in college, and many of the relationships that have endured from that time were built while cruising along the prairie paths west of Chicago. More recently I have played tennis with a good group of friends.