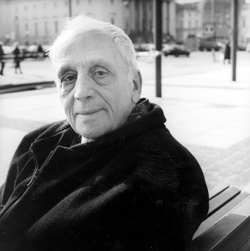 Historian of the First World War

Fritz Klein, a leading historian in (and of) the former German Democratic Republic, and scholar of the World War I era, died in Berlin on May 26, 2011. Klein, born in Berlin in 1924, was a descendent of the Saxon colony in Transylvania. He was the son of the chief editor of the conservative newspaper, the Deutsche Allgemeine Zeitung, who was fired in 1933 by the new Nazi government. After the early death of both his parents, Fritz Klein joined the household of the Social Democrat educational reformer, Heinrich Deiters, who strongly influenced his political and intellectual views. During World War II Klein served on the Eastern front, a searing experience that shaped his views of his Fatherland and convinced him of the need for a national renewal.

After the war Klein joined the Communist Party and studied at the Humboldt University in Berlin, where he wrote his doctoral thesis on the diplomatic relations between the Weimar Republic and the Soviet Union prior to Hitler's seizure of power. Upon graduation Klein was named editor of the newly founded Zeitschrift für Geschichtswissenschaft, the national historical journal of the GDR, but was removed from this post as chief editor for political reasons in 1957. In 1990 he was asked to rejoin the board of editors.

For the next more than 30 years, as a researcher and professor at the Institut für Geschichte of the Deutsche Akademie der Wissenschaften, Klein was at the forefront of historical scholarship, writing, and debate over German imperialism and Germany's role before, during, and after World War I. His first publication, Die diplomatischen Beziehungen Deutschlands zur Sowjetunion 1917–1932 (Weimar 1952), based on his doctoral dissertation and displaying a scrupulous examination of the extant literature, established his reputation as an important scholar of international history. In the early 1960s Klein played an active role in the "Fritz Fischer debate," defending the research and conclusions in Griff nach der Weltmacht over German war guilt in 1914.

Klein's major work, the three-volume Deutschland im Ersten Weltkrieg published under his direction in 1968–69, remains the most authoritative study of this subject. His monograph on German history during the two decades before World War I, Deutschland 1897/98–1917 (Berlin 1961), which went through five editions by 1986, challenged the reigning Marxist thesis on the dominance of monopoly capital in German imperialism before 1918. In his subsequent studies of this subject, Klein published two volumes that were also well received in the West: Studien zum deutschen Imperialismus vor 1914 (Berlin 1976), and Neue Studien zum Imperialismus vor 1914 (Berlin 1980). In the 1980s Klein's focus shifted to peace research, and several of his essays appeared in Western and Eastern publications.

A frequent participant in international conferences, Klein became well known in the United States after 1973 with his frequent visits and guest lectureships at various institutions, including the School of Advanced Studies at Johns Hopkins University in Washington, D.C. As a bureau member of the Association Internationale d'histoire contemporaine de l'Europe, Klein organized in 1988 a major symposium on Europe in 1900, with his West German colleague Karl Otmar von Aretin. (The proceedings of the symposium were published a year later.) Throughout his academic career, Klein served not only as a generous professor and mentor to numerous young historians but also as a gracious host to foreign scholars visiting Berlin.

The end of the GDR deeply affected him. At the end of 1989 Klein, who was approaching retirement, was named institute director and spent the next two years managing the institute's dissolution. On his 75th birthday Klein was awarded a doctorate from Lüneburg University, the first GDR historian to receive such an honor from a West German university. One year later his memoir, Drinnen und draußen, drew an admiring reception. Die Zeit remarked on the considerable value of Klein's testimony, on the gracefulness of his writing, his perceptions of historical events, and the honesty with which he expressed his enduring devotion to socialist ideals despite their perversion by the SED (Socialist Unity Party of Germany) and their dismissal by westerners after 1990.

Klein, who is survived by his wife, Anna-Dorothea, two sons, one daughter, and several grandchildren, leaves an impressive legacy to his beloved profession of scrupulous work, warm collegiality, and a true cosmopolitan vision.