Age as a Category of Historical Analysis

By far the most cited article in the American Historical Review over the past three decades has been Joan W. Scott’s groundbreaking essay “Gender: A Useful Category of Historical Analysis.” The April 2020 issue featuresa similar attempt to elevate a ubiquitous yet overlooked aspect of human life to categorical status. Nicholas Syrett (Univ. of Kansas) and Corinne Field (Univ. of Virginia) have organized the roundtable “Chronological Age: A Useful Category of Historical Analysis,” documenting how “age” as recorded in archival documents is not a transparent fact, but the artifact of a historical process through which a socially constructed category is imposed upon individual lives, a categorical tool that justified granting rights and opportunities to some while excluding others. 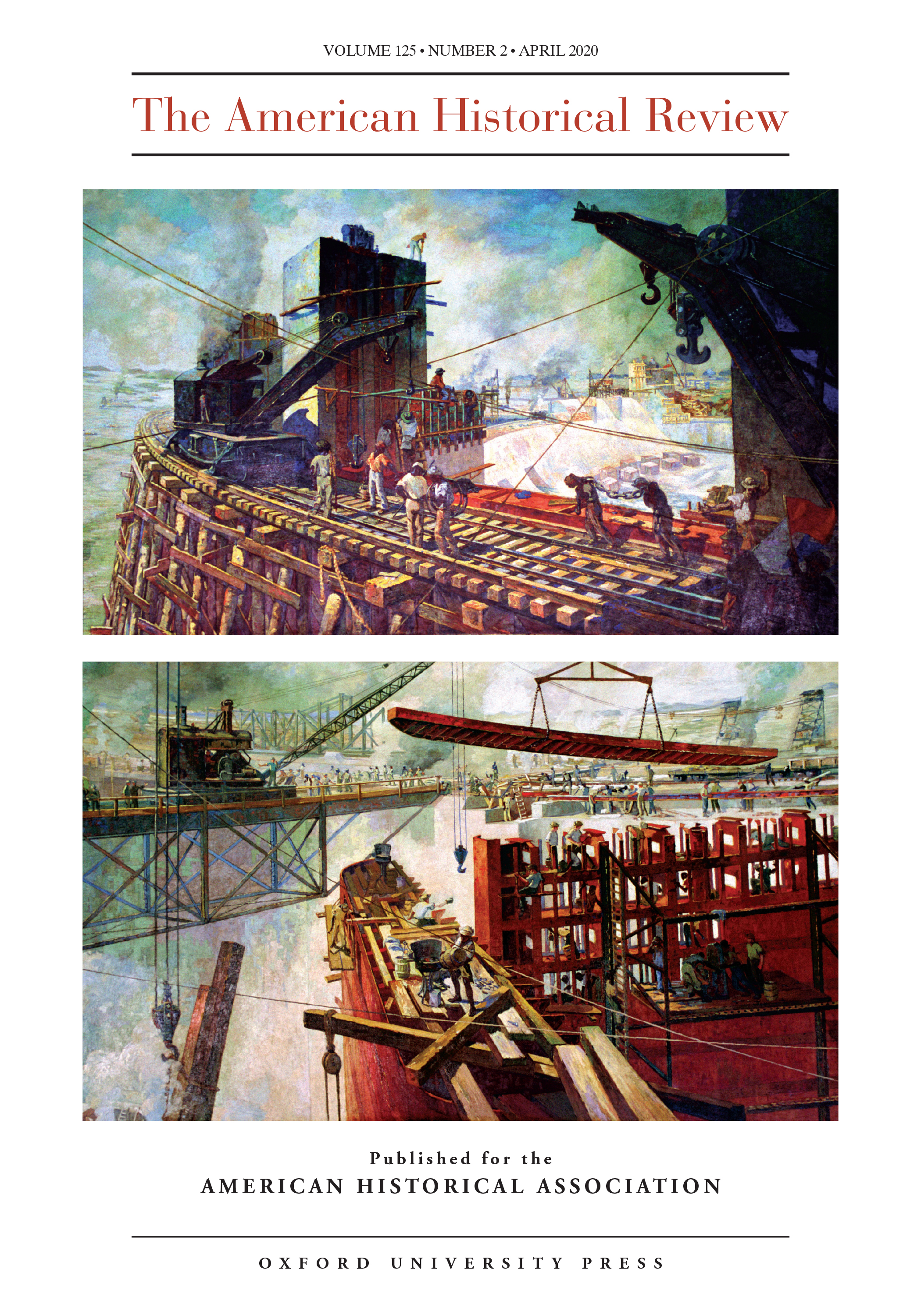 The mural panels featured on the cover of the April issue depict the construction of the Gatun Dam spillway and a partially completed lock gate on the Panama Canal. They are part of a series of murals painted by New York artist William B. Van Ingen and installed in the rotunda of the Panama Canal Administration Building in Balboa in 1915. In “The Global Politics of Anti-Racism: A View from the Canal Zone,” Rebecca Herman shows how efforts to erode racial barriers among canal workers during and after World War II operated within a new framework for challenging a global order grounded in racialized notions of fitness for self-government. At the same time, she argues, leaders from the “Global South” who adopted anti-racist rhetoric to challenge their disadvantaged position in the international sphere could also sustain racial hierarchy at home. Anti-racist struggles within Panama and the Canal Zone mapped onto the anti-imperialist project of a nevertheless persistently racist Panamanian state. Images used with permission of the Panama Canal Authority.

Collectively, the roundtable examines the protean conceptualization and operation of “chronological age” in a variety of historical moments and geographic areas. In her sweeping essay “Old Age in European Cultures: A Significant Presence from Antiquity to the Present,” Pat Thane (Kings Coll. London) offers a reminder that old age is not an exclusively modern condition, and that the shifting historical experience of the aged deserves more attention from scholars. Considering the other end of the age spectrum, Ishita Pande’s (Queen’s Univ.) “Power, Knowledge, and the Epistemic Contract on Age: The Case of Colonial India” scrutinizes the implementation of age-of-consent legislation in high courts across colonial India. Corrie Decker (Univ. of California, Davis) provides another essay on the gendered reconfiguration of the meaning of age in the colonial context. In “A Feminist Methodology of Age Grading and History in Africa,” Decker shows that while precolonial African societies assessed age in relative terms (juniors versus seniors), colonial authorities expanded the legal importance of chronological age. Faced with two incommensurable systems for understanding life stages, African women found new ways to assert a sense of generational belonging and new definitions of maturity.

The three remaining essays in the roundtable shift attention to the modern era. In “A Man at Twenty, Over the Hill at Twenty-Five: The Conscription Exam Age in Japan,” Sayaka Chatani (National Univ. of Singapore) explores the connections between age and military conscription in post-Meiji Japan. The universal norm of conscription at age 20 unsettled the rhythms of rural life and redefined the meanings of masculinity and adulthood for people far beyond those drafted into the army, Chatani argues, translating flexible life stages into a fixed calendar age. The state insured that the cultural and discursive power of “age” became a form of authoritative power that lay beyond negotiation. In the 20th century, such mandated definitions of maturity took on a supra-national character. In “The Moral Hierarchies of Age Standards: The UN Debates a Common Minimum Marriage Age, 1951–1962,” Ashwini Tambe (Univ. of Maryland) examines the United Nations’ efforts to consider a universal minimum age of consent for marriage. This involved a series of tense deliberations, as former colonial powers framed early and forced marriage in newly independent states as forms of slavery. Debates about a universal marriage age came to mark differences between imperial powers and decolonizing nations, Tambe argues.

Finally, Field and Syrett make their own contribution to the roundtable with “Age and the Construction of Gendered and Raced Citizenship in the United States.” Focusing on the postbellum United States, they argue that the state relied upon age to reinforce inequalities rooted in female dependence and chattel slavery. Congress denied equal benefits to the families of black Civil War soldiers because they lacked adequate proof of age. Postbellum legal majority differentiated between men and women, shoring up gender inequality even as women gained new rights and opportunities. Chronological age, Field and Syrett conclude forcefully, is not a neutral fact, but a vector of power through which officials and ordinary people construct and contest the boundaries of citizenship and belonging. This central point is common to all the essays in the roundtable.

Chronological age is not a neutral fact, but a vector of power.

In addition to the roundtable, the April issue includes an article by Rebecca Herman (Univ. of California, Berkeley), “The Global Politics of Anti-Racism: A View from the Canal Zone.” During World War II, leaders of “non-white” countries gained a new framework for challenging a global order grounded in racialized notions of fitness for self-government. At the same time, leaders who adopted anti-racist rhetoric to challenge their disadvantaged position in the international sphere were sometimes architects of racial hierarchy at home. Herman shows how anti-racist struggles within Panama and the Canal Zone mapped onto the anti-imperialist project of a still-racist Panamanian state. Foregrounding Latin America in a history of global anti-racism, Herman contends, can disrupt a binary vision of a world divided between colonizers and colonized, a racist Global North and an anti-racist Global South. The view from the Canal Zone reveals the interplay between anti-imperialist challenges to global racism and local struggles for racial equality.

Two other features should be of wide interest. In 2017, Adel Manna (Van Leer Jerusalem Institute) published Nakba and Survival: The Story of the Palestinians Who Remained in Haifa and the Galilee, 1948–1956 in Hebrew and Arabic. The AHR asked four scholars of Israeli and Palestinian history—Orit Bashkin (Univ. of Chicago), Leena Dallasheh (Humboldt State Univ.), Maha Nassar (Univ. of Arizona), and Ahmad H. Sa’di (Ben Gurion Univ.)—to review it, making scholarly appraisals of the book widely available in English.

Finally, the April issue includes a vigorous exchange about the methodological presuppositions of historians working within the field of Native American and Indigenous Studies (NAIS). In a review of two recent books, Our Beloved Kin: A New History of King Philip’s War by Lisa Brooks and Memory Lands: King Philip’s War and the Place of Violence in the Northeast by Christine DeLucia, David Silverman (George Washington Univ.) claims that these historians, and NAIS scholars in general, are overly credulous in their reliance on indigenous sources and narratives and overly skeptical or critical of those produced by the colonizers. DeLucia, Philip Deloria (Harvard Univ.), Alyssa Mt. Pleasant (Univ. at Buffalo), and Jean O’Brien (Univ. of Minnesota) respond, defending the field’s methods and governing assumptions. The hope is that readers, whatever their views on this question, the books under review, or the field of NAIS more generally, will find this a productive and illuminating exchange.