Teaching Environmental History in US and World History Survey Courses

Thermohaline circulation, Aedes aegypti, sodium nitrate, and CO2 uptake are all terms that four years ago I would not have envisioned using in my US and world history survey course classrooms. Let’s face it—even though some of us may have a hidden science nerd lurking within—most historians are not formally trained in biological, environmental, climate, and meteorological sciences. Moreover, historians, with our emphasis on human agency, tend to be a bit leery of environmental determinism. And yet, as a participant in the AHA’s three-year program “American History, Atlantic and Pacific,” supported by a grant from the NEH’s Bridging Cultures initiative, I found myself completely hooked by our environmental history presentations.

Megadroughts, guano deposits, and mosquito-borne illnesses all played a significant role in shaping history as we know it. In the classroom, disease, climate change, and weather patterns, all underlying forces that contribute to the ebb and flow of human history, can give students a sense of the “bigger picture” and of the deeply interconnected planet we inhabit. Teaching environmental history demonstrates the interdisciplinary nature of history and of thinking historically. Mostly though, it works in the classroom because students find it as thoroughly interesting (and timely) as I do.

There is no more relevant example of the importance of environmental climate change in history than the “Little Ice Age” or—to employ a more latitudinally and hemispherically broader term—“long-term climate change” (yes, it is also less catchy), which refers to both decreased temperatures and increased droughts from 1200–1900. The Little Ice Age devastated Europe with longer winters and decreases in ocean fishing and agricultural productivity. Up in the Arctic Circle, the dramatic cooling likely forced the Norsemen out of Greenland and their settlements in North America. Students find it particularly interesting that the Norse withdrawal left the Americas isolated from the diseases of Eurasia until the 16th century, making climate change a significant factor in the Columbian exchange and resultant conquest of the Americas. (For causal factors, please see my discussion and citations in the linked teaching resources.) 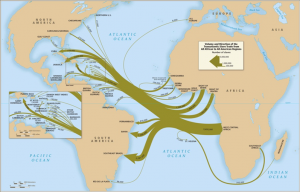 In Asia, Africa, and the Americas, the primary impact of long-term global climate change involved a series of “megadroughts” believed to be behind the collapse of multiple empires around the world during the 14th century. When discussing the struggles of the early New England colonies, students are fascinated to learn that dendrochronology (the study of tree rings) indicates that a megadrought factored in the failures of Roanoke (the Lost Colony) and Jamestown, where English colonists experienced the worst drought in a millennium. Climate change is also an effective way to reframe the trans-Atlantic slave trade in the classroom. Understanding the way that megadroughts wreaked havoc on both the trade patterns and agriculture of West African empires helps students grasp how climate change can reshape entire economic and political systems to tragic result.

One of the most significant, but lesser known, elements of the Atlantic biological exchange is the African mosquito. Just as Afro-Eurasian pathogens altered the balance of power in the Americas in the wake of early European conquest there, J. R. McNeill, in his book Mosquito Empires: Ecology and War in the Greater Caribbean, 1620–1914 (2010), contends that two diseases emerged to dominate the demographic and military patterns shaping empire building across the Americas during the 17th through 19th centuries: malaria and yellow fever. By the late 17th century, an increasingly aggressive disease environment conferred “differential immunity and resistance” to inhabitants of the Americas, advantages that McNeill argues proved to be decisive in both wars for colonial possessions and the series of anti-colonial revolutions that followed at the end of the century. My lecture on the American Revolution is enlivened by the surprise reveal that mosquitoes influenced the Battle of Yorktown as notably as General Washington’s bold tactics!

Environmental history, as a new(er) teaching frontier for historians, can admittedly be a tricky lens to employ. Not only does it fall outside the comfort zone of most history professors, there is always the very real potential of encountering science majors in the classroom, who understand the terminology and underlying scientific concepts better than we do! While it may be tempting to avoid such potentially awkward teaching moments, they provide wonderful opportunities not only in allowing our science students to shine, but indeed, for modelling that learning is a lifelong process, and that, in the words of Percy Bysshe Shelley, “The more we study, the more we discover our ignorance.”

In the Bridging Cultures Resources 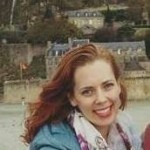 Allison Frickert-Murashige is professor of Asian history at Mt. San Antonio College in Southern California, and teaches courses in world, US, and Asian history. Her interests include Japanese and American Pacific interactions, 19th-century travel writings, and public memory sites in Asia. She is an active member of the East-West Center’s Asian Studies Development Program and is an avid study abroad junkie.