A few weeks ago the European Union (EU) signed a controversial agreement with Turkey to staunch the flow of Syrian refugees to Europe. The agreement is a testament to Europe’s failure to cope with the millions of refugees who have reached its shores from Africa, the Balkans, and the Middle East over the past few years. This crisis seems unprecedented, but is it? The German Historical Institute took up this issue the other evening, hosting a fascinating panel discussion titled “Learning from the Past? The Refugee Crisis in Historical Perspective.” The event could hardly have been timelier. 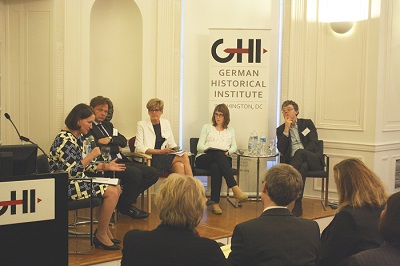 The panel participants were Philipp Ackermann, deputy chief of mission at the German embassy; Leo Lucassen, research director of the International Institute of Social History in Amsterdam; Kathleen Newland, senior fellow at the Migration Policy Institute; and Kirsten Schuettler, senior program officer at the World Bank’s Migration and Remittances unit. Cathleen Fischer, president of the American Friends of the Humboldt Foundation, moderated the panel, which concluded a day-long symposium on the subject.

The symposium examined previous waves of refugees in postwar Europe, including the Germans expelled from eastern Europe at the end of World War II, the Europeans and their families driven by decolonization from Asia and Africa, the Hungarians who fled their country after the Soviets crushed the 1956 uprising, and the Bosnians who fled war in the 1990s. The present influx of refugees, therefore, is hardly unprecedented. The members of the EU are signatories to the 1951 Convention on the Status of Refugees, which establishes a set of international norms for dealing with refugees. Yet Europe has found the current crisis unusually challenging. Why?

A newly destabilizing factor, according to Lucassen, is Islamophobia. He observed that receiving societies respond to the influx of refugees in two ways. One response is to adopt an inclusive approach. The Dutch, for example, welcomed refugees from newly independent Indonesia as their countrymen, even though many of them were Eurasians. The other response is to stress difference, a stance that has become especially apparent in the nativist reaction to the current influx of refugees. Driven in part by 9/11 and subsequent terrorist attacks by Islamic extremists, Islamophobia has become a far greater force than it was in the 1990s, even though a substantial portion of the Bosnian refugee population was Muslim.

Ackermann amplified Lucassen’s point about Islamophobia by noting that many Germans feel threatened by the current influx of refugees, even though few of them have actually come in contact with them. He referred to this phenomenon as a “perception problem.” At the same time, he noted that Germany itself is increasingly a society of immigrants—20 percent of the population has at least one parent who was born in another country—though that seems to have done little to mitigate the fear of foreigners. 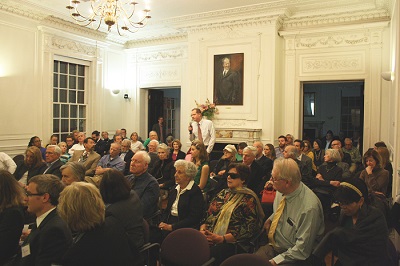 An audience member poses a question to the panel at the GHI symposium. Credit: Sascha Brünig

Panelists also stressed the failure of the EU and its member states to manage the refugee crisis. Citizens expect their governments to maintain order and control, Newland observed, but the current crisis has exposed their inability to do so. She also pointed out that states have “defined down” or reinterpreted the categories of persons they are obligated to assist under the refugee convention to exclude certain qualifying groups, such as Eritreans. The failure of member states to cooperate with one another has placed disproportionate burdens on front-line states and, as Schettler pointed out, undermined the EU itself. Lucassen added that because the EU has abandoned the visa regime that allowed refugees legal access to European countries, it has forced refugees to seek assistance from smugglers, thereby turning southern Europe into “the most lethal border in the world.”

Panelists drew on past cases to argue that host countries can cope with refugees and benefit from their presence. According to Lucassen, studies of previous waves of refugees indicate that European welfare systems are capable of handling the numbers currently seeking entry to Europe. Schuettler cited evidence that refugees, given time, actually integrate into labor markets and become self-supporting more successfully than economic migrants, who often return to their countries of origin. Newland argued that a country’s willingness to accept refugees can be an effective form of “soft power.” She and other panelists pointed to Canada as a praiseworthy example, referring to the “Canada-envy” felt by advocates of assistance to refugees.

Yet Canada is the exception, not the rule, and the mere mention of it served to remind everyone of the elephant in the room—the United States. It wasn’t difficult for the audience to see parallels between Europeans’ Islamophobic fear of refugees and the hysteria that afflicts our own public debates about refugees and other migrants. Nor is the EU alone in its inability to organize a rational and humane response to those who flee war and persecution. No one who attended this sobering panel could avoid reflecting on our failures here at home.