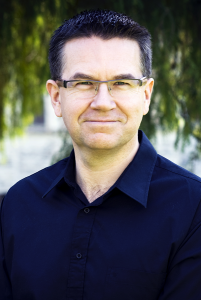 Stephen Robertson is a professor of history and the director of the Roy Rosenzweig Center for History & New Media at George Mason University. He lives in Chantilly, Virginia, and has been a member since 1991.

When did you first develop an interest in history?
I have been passionate about history for as long as I can remember, influenced in part by my mother’s interest. I am one of those people who always knew what they wanted to do, and when I finally got to study history I was helped on that path by Paul O’Connor at Kings High School, Erik Olsen and Barbara Brookes at the University of Otago, Alice Kessler-Harris at Rutgers University, and the extraordinary classmates I had at Otago and Rutgers.

What projects are you currently working on?
A spatial history of the 1935 Harlem riot, in collaboration with Shane White and Stephen Garton, which extends our ongoing digital history project, Digital Harlem. A history of private detectives and undercover surveillance in the US between the Civil War and World War II, an era when the state largely left surveillance to private corporations and organizations. A software development project, in collaboration with Sean Takats, to create a tool to organize and attach metadata to digital images taken in archival research, and to share them with archives, for which we are currently seeking funding. And an NEH workshop for teachers in summer 2016 focused on using the graffiti left by Civil War soldiers to personalize the social and cultural history of the war, modeled on projects students in my undergraduate digital history classes have been doing. I have my daughter to thank for this last project, a new field for me, as I first encountered the graffiti when she visited Blenheim House in Fairfax, Virginia, for an AP US history assignment.

Have your interests changed since graduation? If so, how?
I became much more interested in teaching and curriculum design in the years after graduation, and I have published and presented on both, fueled by a passion for teaching that I did not have until I started lecturing. Thanks to an invitation from Shane White to join a collaborative project on 1920s Harlem—and the decision of the Australian Research Council to fund that project, and not the one I had submitted to continue my work on the history of sexual violence—I moved into urban history and African American history, and my digital scholarship refocused on mapping. However, through all these projects, I have continued to analyze legal records, and pursue history from below.

What do you value most about the history profession?
The opportunity to make sense of the world in which I live by recovering and reconstructing its past. The encounters with a past populated by people, places, and ideas very different from those that surround me, and the challenge to approach that difference empathetically, to try to understand the past on its own terms rather than rush to judgment. The perspective that context matters. The community of scholars sharing their passions and ideas. The students that keep me learning, and fire my enthusiasm for history. The autonomy to pursue my changing interests.

Why have you continued to be a member of the AHA?
I joined the AHA as a graduate student in order to receive the AHR, and the journal has been important to keeping me a member. During the 14 years I spent in Australia, I also grew to value the AHA as a means of staying in contact with the historical profession in the US, and, as a historian of the US marginalized by Australian historical organizations, as an organization that encompassed the breadth of the discipline and profession.

Do you have a favorite AHA annual meeting anecdote you would like to share?
The first annual meeting at which I presented was in Atlanta in 1996, the year of the great storm. I was stranded in the conference hotel for two extra nights, joining other graduate students with no money scrambling to find rooms to sleep in, and free activities to occupy the time in a city shut down by a sprinkling of snow. When I eventually got a flight back to New Jersey, the passengers applauded both the takeoff and landing.

Other than history, what are you passionate about?
Reading fiction, travel, politics (ironically, thanks to the years I spent on student visas and as a permanent resident, I have been unable to vote much of my adult life), and sports. When I came to the US I adopted American sports in place of those I had followed in New Zealand, and never went back. For better or worse, adopting local teams as we moved has left me following Rutgers University, the NY Jets, the Brooklyn Nets, and the Chicago Cubs—and beginning this year, the Bryn Mawr College basketball team, on which my daughter will be playing. In Australia I was a basketball referee and a score table official, but the rules are different in the US, and I have not had a chance to retool.