The April 2013 issue of the American Historical Review will soon appear both in members' mailboxes and online. It includes five articles on an eclectic mix of subjects, ranging from the agrarian history of Ottoman Egypt and the environmental history of the Pacific to friendship between early modern Jews and Christians, the experiences of Muslim travelers to Europe in the late 19th century, and homoerotic photography in 20th-century Germany. There are also four featured reviews, followed by our usual extensive book review section. 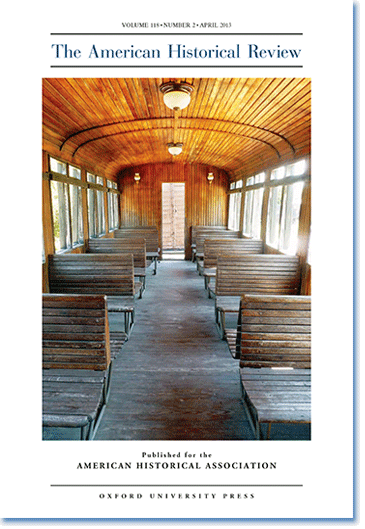 The first two articles share an interest in the relationship of humans to animals—a burgeoning field in present-day historical studies. In "Unleashing the Beast: Animals, Energy, and the Economy of Labor in Ottoman Egypt," Alan Mikhail focuses on the history of this relationship as a means of analyzing the global transition of early modern rural societies from subsistence to commercialized agriculture. Using Ottoman Egypt as a case study, he offers a template for understanding how rural economies based on both animal wealth and the shared labor of humans and animals changed at the end of the 18th century, making possible the formation of large landed estates characterized by human labor. For Mikhail this transition represented a fundamental change in the energy regime of Ottoman Egypt—from animal power to human power—that set Egypt on a wholly new political and economic course in the early 19th century. To explain what is often termed a society's "transition to modernity" is a challenge faced by historians of many parts of the world. Combining the study of human-animal relations, early modern agriculture, and Ottoman economic and social history, this article argues for the importance of nonhuman histories in understanding global economic, energetic, and political transformations.

In "Running into Whales: The History of the North Pacific from below the Waves," Ryan Tucker Jones argues that a serious look at marine animal cultures forces us to rethink human histories. In the North Pacific over the course of the long 19th century, whales, sea otters, salmon, and fur seals helped create a coherent human community stretching from Japan to Baja California. Though often conceived of as a theater of empire, the North Pacific saw Europeans mostly abandon agriculture in favor of exploiting marine resources, a choice that embedded them in long-established geographies. Instead of reproducing European cultures, their expansion throughout the North Pacific often spread Aleut economies and ecologies, low in marine mammals and high in smaller invertebrates. Indeed, by the end of the 19th century, European and indigenous conceptions of the ocean converged around problems of managing dwindling marine mammal stocks, culminating in the Fur Seal Conservation Treaty of 1911. By diving below the waves, Jones uncovers a community of humans and animals that can be understood only by examining the changing cultures of each species.

In "Interfaith Encounters between Jews and Christians in the Early Modern Period and Beyond: Toward a Framework," Daniel Jütte suggests a new approach to the historical study of interfaith relations in premodern Europe. He argues that conflict and enmity do not tell the whole story. Were there amicable relations and even friendships between Jews and Christians in medieval and early modern Europe? And if so, how do we fit them into our understanding of Christian-Jewish relations? In order to pursue these questions, Jütte undertakes a microhistorical case study based on the memoirs of a German merchant, Hans Ulrich Krafft (1550–1621). What he finds is that three factors played a pivotal role in expanding the spectrum of Christian-Jewish relations during the early modern period: the heightened role of travel and mobility, the effects of the confessionalization of Christianity, and the importance of local identity as a common link. The article then discusses the various meanings of "friendship" in the early modern period, showing that, in practice, it did indeed exist as part of interfaith relations. The conclusion outlines the methodological challenges that need to be addressed if we are to achieve a more varied and multidimensional understanding of both interfaith relations and friendship in the early modern past.

In "Spacetime and the Muslim Journey West: Industrial Communications in the Making of the 'Muslim World,'" Nile Green traces how the increasing ease of travel by train and steamship in the late 1800s stimulated new conceptions of geography and history among newly mobile intellectuals from India, Iran, and Afghanistan. He argues that accelerated movements in space provoked reflections on time as industrialized journeys led Muslims to reconceptualize their collective past and communal geography. Industrial products in their own right, their writings circulated through postal and publishing networks that accelerated the movement of ideas no less than bodies. Whether writing in Persian, Urdu, or the new Islamic languages of German and English, these itinerant intellectuals shifted the temporal and spatial coordinates of Islam to articulate a new Muslim "spacetime" through their interactions with Europe. At the hub of global communication networks, European cities became exporters of a modern Islamic knowledge, whose component parts were increasingly hybrid in origin. A focus on industrialization rather than empire highlights the role of industrial communications in disseminating the changing conceptions of space and time that configured the idea of a "Muslim world." By tracking intellectual shifts of fundamental concepts alongside the experience of global displacement, Green's essay shows the permeability of Islam to the forces of globalized modernity.

In "Seeing Subjectivity: Erotic Photography and the Optics of Desire," Jennifer V. Evans proposes a method for analyzing photography as a source of the self. Drawing on select strands of photography and affect theory, she demonstrates ways we might tease out the intersubjective effects of images in both reflecting and constructing a range of time-bound expressions of emotion. Instead of simply focusing on a photograph's ability to document past events, Evans suggests that we would do better to think about "the social lives of images" so as to historicize the sentiments that photos call into being in different moments of consumption and display. Erotic photographs are particularly useful in this regard. Not only do they shine a light on a complex range of human emotions, from intimacy and physical and emotional complementarity to the pursuit of pleasure, danger, and desire; they also provoke a reaction, elicit a response, and, as products of human industry and imagination, play a significant role in how we negotiate our likes and dislikes, what we tolerate or abhor. Evans applies her analysis to the "hustler photos" of West German photographer Herbert Tobias, which migrated from the photographer's friendship circle and into the pages of a pornographic men's magazine before surfacing once again in fine art galleries and coffee table books. She argues that in thinking about the dual function of photographs, as emblems of particular moments in time and as agents in their own right—both conditioning responses and providing occasion for self-reflection and discovery—we open ourselves up to new ways of appreciating subjectivity in history.

June's issue will include an AHR Forum on "Pre-Histories," as well as articles on the emergence of nationalist sentiments after World War II and obscenity and literature in 20th-century England.

Robert A. Schneider (Indiana Univ.) is the editor of the American Historical Review.