On July 10, 2011, the stars were aligned. On that day, according to Jim Warwick, assistant US attorney for the Department of Justice, a sharp-eyed employee of the Maryland Historical Society sensed that two researchers, later revealed to be Barry Landau and Jason Savedoff, were acting strangely. Following this hunch, the employee crawled into the rafters and observed from above as Savedoff stuffed documents into his jacket while Landau distracted another employee. A few phone calls later, with the assistance of the FBI and the National Archives Office of the Inspector General (NARA OIG), Savedoff and Landau were in custody. But for Warwick and Mitchell Yockelson, investigative archivist with the NARA OIG, the arrest was only be the beginning of an extraordinary case of stolen documents that resembeled a real-life episode of Law & Order.

Warwick and Yockelson spoke candidly about the investigation at a recent public program at the National Archives and Records Administration (NARA) on March 7, 2013, which was live streamed and live tweeted (#naraig) as a way to bring the story to a broader audience. Warwick, who ordinarily prosecutes drug cases, was the lead investigator on the case, and in the presentation he observed that, fortunately, all of the necessary elements came together that day and resulted in the capture of the pair. Although Landau and Savedoff were ultimately convicted of a string of archival thefts dating back several decades, they easily could have continued stealing documents if they hadn’t been caught in the act. Archivist of the United States David S. Ferriero introduced the investigators, and what followed was a fascinating look at what they described as one man’s entire persona and way of life built around the theft of archival documents. 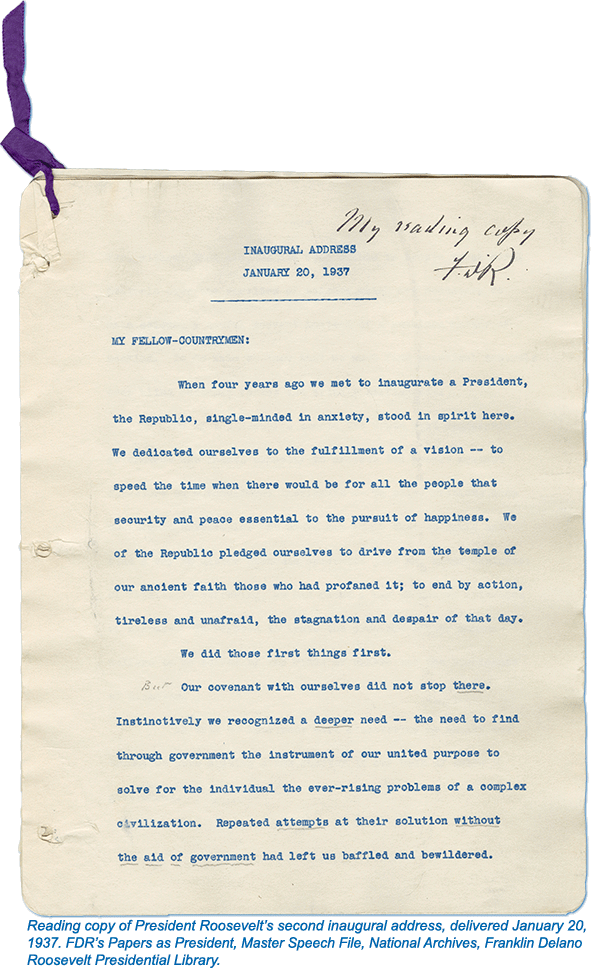 Yockelson described how NARA archivists and local FBI agents gained access to Landau’s apartment in New York within a few days of his arrest. What they found there shocked them all. The entire apartment was filled with archival material, including documents and artifacts, all labeled meticulously. It was, he noted, “like a Toys ‘R’ Us for historians.” With only a limited time to collect material under the terms of the warrant, Yockelson and his team quickly realized that the three archival boxes they had brought from NARA would not be nearly enough. In the end, they claimed, over 7,000 items were eventually retrieved from Landau’s New York City apartment. NARA quickly obtained a second search warrant that brought the total to 10,000 recovered items.

With a hint of bemusement, the investigative team described how Landau, clearly the mastermind, had pulled off the heists for so many years: Landau had played the part of presidential researcher and published author to the hilt, and he had used this ploy to distract archivists and librarians. Often, he would bring cupcakes in and chat with the staff while Savedoff, who had arrived earlier, reviewed documents and stuffed them into what the investigators called his “designer theftware”—a sport jacket with enormous pockets sewn in the lining. They described how Landau was careful to target documents that had not been digitized or microfilmed so that stolen items would be harder to identify, and the investigators showed the audience a paper catalog card that Landau had destroyed so that the loss would be harder to detect.

Landau and Savedoff had relationships with dealers and collectors, and they knew what was valuable in the historic memorabilia and autograph market. According to Warwick, Landau, who had primarily been interested in ephemera, had been encouraged to go for more big-name items when he had teamed up with Savedoff 10 months prior to their arrest. Among the haul that the investigators recovered were a number of extraordinary items, including handwritten letters and documents by Sir Isaac Newton, Edgar Allen Poe, John J. Audubon, Marie Antoinette, Thomas Jefferson, and John Hancock. One of the most prized recoveries was Franklin Roosevelt’s 1937 inaugural address, bearing the marks of raindrops and held together by a purple ribbon. Yockelson explained that the raindrops authenticated the document as the original because FDR had delivered the address without a hat on a rainy day. The purple ribbon identified it as NARA’s own document, because the NARA archivists recognized this element as one that Grace Tully, FDR’s secretary, added to office copies of his speeches.

Since Landau did not keep meticulous notes of where his stolen documents had come from, the process of returning the items was difficult and is still ongoing. So far, approximately 6,000 of the original 10,000 items have been returned, but many more were probably sold in the decades when Landau was active. Warwick suggested that collectors and the public have to be more vigilant about provenance and that Landau’s outlandish lies about his well-connected family and career as a presidential confidant and historian would have been easily detected if anyone had taken the time.

Ultimately, Savedoff received 12 months in jail and Landau received seven years, but the real legacy is the way news of this case has reverberated in the archival community. As a result of this case, many archives have made changes to their practices. NARA now searches every employee leaving the building, many smaller archives have adjusted their security and researcher policies, and staff from victimized archives travel and give presentations to other groups. And as one audience member suggested, while watching the live stream of the event, it’s best to beware of historians bearing cupcakes.