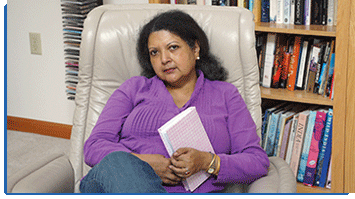 Kumkum Chatterjee passed away in State College, Pennsylvania, on Thursday morning, December 13, 2012, after battling cancer. She was a distinguished scholar of South Asian history, a wonderful colleague, an inspiring teacher and mentor, a dedicated citizen at Penn State University and in the profession at large, an exceptional human being, and a very dear friend.

Professor Chatterjee received her PhD from Calcutta University in Calcutta (Kolkata), India, and taught in the history department at Penn State beginning in 1989. She was a preeminent scholar of early modern South Asia, and one whose corpus of work helped to redefine the field of the early modern period in South Asia as well as its place in the world. She was the author of two brilliant monographs, Merchants, Politics and Society in Early Modern India: Bihar 1733–1820 (1996) and The Cultures of History in Early Modern India: Persianization and Mughal Culture in Bengal (2009), and of several articles published in leading journals, including Modern Asian Studies and the American Historical Review. She served in several professional organizations, including as the vice president of the American Institute of Indian Studies. Professor Chatterjee was at the peak of her career when it was cruelly cut short, and was at work on a new project on the currency of Mughal political culture in eastern India at the time of her death.

Professor Chatterjee's work on India covered a period from roughly the 17th century to the early 19th century, from the Mughal through the post-Mughal to the early "Company" period. Her work focused on merchants and scribes, on trade and political culture, on historical and travel writing, on Bihar and Bengal, and on courtly and popular culture. She worked with official East India Company archives as well as with a range of published and unpublished manuscript sources in Sanskrit, Persian, Bengali, and English. More recently, she was branching out to explore visual culture. This unusual range shares a central theme: a commitment to understanding the contours of the early modern world in its own terms.

Her ability to work with a wide range of sources in several different languages, and at both the imperial and the provincial level, combined with her fine-grained analyses and invariably judicious conclusions was truly impressive. Few scholars, indeed, could really go head-to-head with Professor Chatterjee in terms of the sustained quality and depth of her scholarship. She was a scholar's scholar, not in the sense that her work was not widely accessible (her writing is, in fact, exemplary in its lucidity), but in the sense of the measured and thoughtful quality of all her judgments. This is scholarship that is meant to last. What ultimately distinguishes Professor Chatterjee was the humility and respect with which she approached her work: She never hesitated to wade into the thick of historiographical cruxes, but she used her sound historical skills and intuition to clear an independent path for herself. If there were one historian that I had to recommend to graduate students as a model for their own practice, I would point to Professor Chatterjee.

For those fortunate enough to be her friend, Kumkum was not just a brilliant scholar, she was also an incredibly warm and generous human being, a teacher, a mentor, a colleague, and a friend. No one who encountered her, however briefly, could fail to miss the humility, grace, and generosity of her spirit. Her students at Penn State were the special beneficiaries of her largesse, both intellectual and personal. She had a playful sense of humor and was an acutely funny raconteur. She was an excellent cook and her hospitality was legendary in State College; her home, which she shared with her husband of 28 years, Kalyan Chatterjee, was the site for numerous get-togethers with out-of-this-world food, drink, laughter, and conversation. Kumkum loved music, and films, and books, and politics, but, most of all, she loved life and she loved people. We are all richer for having known her and will miss her terribly.

Her family, her friends, and her colleagues, who gathered at her memorial service in State College remembered her numerous acts of kindness. She was, as one friend so aptly put it, a "luminous" personality.