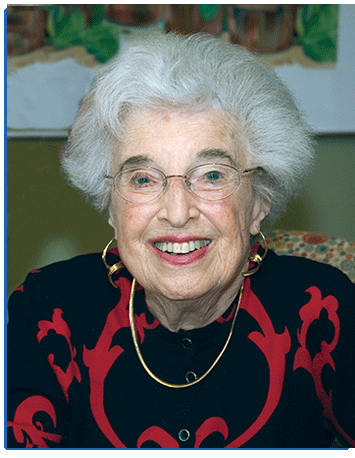 Gerda Lerner was a historian of remarkable eloquence, insight, and courage; a resolute advocate of the capacity of history to change the course of human events. She devoted her academic lifetime to illuminating the idea that women had a history, and that knowing it could alter human consciousness. "Writing history and thinking about women," she wrote in Why History Matters: Life and Thought (1998), "could lead to transformative politics rooted in both thought and experience."

Born Gerda Kronstein in Vienna, Austria, in 1920, she and her family fled the country in 1938 in the face of the Nazi incursion, and after she and her mother emerged from six weeks in a Gestapo prison. Deported, stateless, she made her way to the United States. In the war years she married film editor Carl Lerner, who would become best known for his work on Twelve Angry Men. They had two children, Stephanie, now a psychotherapist, and Dan, now a film director. There followed a period as a mother of young children, during which she volunteered as a community organizer and Communist Party member. In the same years, she began to write poetry, fiction (No Farewell, 1955), drama, and screenplays (Black Like Me, 1964).

In 1962, already in her early 40s, she decided to continue her interrupted education at the New School for Social Research, where, despite her undergraduate status, she taught one of the first courses in US women's history in 1962, a point of which she was always very proud. From the time she entered Columbia as a graduate student in 1965 until her death on January 3, 2013, at the age of 92, Gerda Lerner remained firmly committed. She knew she wanted to explore the history of women and she did so with a single-minded energy that led her from a biography of the Grimké sisters to a pathbreaking collection of documents entitled Black Women in White America: A Documentary History (1972). She embarked on the latter project, she always said, to prove that documents existed with which to write the history of black women. That book illustrated the point that she would later make about Jews in Why History Matters. Jews, she wrote there, had deployed their history "as a primary tool for the survival of the people." Women's history had to do the same. It had already, she thought, "forced us to question not only why certain content was previously omitted, ignored, and trivialized, but also to consider who decides what is to be included."

Advocating for women's history meant convincing a reluctant generation of historians to incorporate research on women under the canopy of the historical profession. Pursuing that aim, Lerner moved from her first job at Long Island University to Sarah Lawrence College, where she almost immediately won a grant from the Rockefeller Foundation to establish the first MA graduate program in women's history. Working with Renaissance historian Joan Kelly, Lerner developed this program into a continuing demonstration of the importance of accumulating knowledge about women that would participate in changing their worlds. Starting in 1980, as Robinson-Edwards Professor of History at the University of Wisconsin, she built a thriving PhD program in women's history.

For the rest of her life, she worked to expand women's history by encouraging young women and men to pursue the field. She helped to legitimate it by pressuring professional organizations, their journals, and their annual meeting to take women's subject seriously.

On these matters she spoke trenchantly both publicly and privately. A generation of incipient historians of women came to know her as an architect of the Coordinating Committee on Women in the Historical Profession, which, beginning in 1969, persuaded the AHA and the Organization of American Historians (OAH) to join in improving the status of women.

Because Gerda Lerner pushed her agenda hard, she was never a neutral figure. Loved and admired by a legion of devoted followers, she was not always welcomed by traditional historians, who accused her of dipping into fields in which she had not specialized. How could someone not trained in anthropology or in classical and medieval history have written books like The Creation of Patriarchy (1986) or The Creation of Feminist Consciousness: From the Middle Ages to Eighteen-seventy (1993), which reached back into antiquity and the Middle Ages to find the roots of women's subordination? Could traditional historians take her sweeping sentences seriously? In Living with History: Making Social Change (2009), she observed, "The oppression of women being the oldest form of oppression, it became incorporated in the ideologies, myths, traditions, and philosophies of Western civilization and thus was perceived as natural and God-given, something that could not be resisted."

Lerner's expansive vision and her engaged scholarship endeared her to wide public audiences. In and out of the profession there were many who admired what the citation for the AHA's Award for Scholarly Distinction (1992) described as her "astonishing demonstration of virtuosity." No one has put this better than Natalie Zemon Davis, who has commented on "her unflagging struggle for gender and racial equality, and her courageous effort to think big about patriarchal turns in human history. Her life was a model of triumph over persecution and loss, of continuing hope and connection. Her reach is long and stays with us—lingers like the memory of her laugh." These qualities earned her recognition as a celebrated historian who garnered dozens of honors, including the presidency of the OAH, 17 honorary degrees, and the Austrian Cross of Honor for Science and Art.

Gerda Lerner's life and her art were of a piece. In A Death of One's Own (1978), an extended meditation on her husband's death at 61 from a brain tumor, and on the deaths of others in her extended family at the hands of the Nazis, she observed that "the past must be retraced in order to survive the present. The pieces must be joined together … out of the memories, the ashes of destruction, the suddenly revealed meanings." That could be the epigraph for her autobiography, Fireweed, perhaps the most beautifully written and moving of her many publications. Her commitment to joining the past to the future was also the source of her deep devotion to her four grandchildren, Sophie, Joshua, Reed, and Clay.

Hard-won understanding of the importance of the documentary record led her to preserve her own papers carefully, and to give them to the Schlesinger Library for the History of Women at the Radcliffe Institute; the calendar of the first sections of her gift is available online, and more will be added as her remaining gift is processed. A smaller collection at the Leo Baeck Institute Archives in New York City includes family correspondence during the war years. Memorial donations are welcomed by the OAH Lerner-Scott Prize for the best dissertation in women's history and the Gerda Lerner Fellowship Fund at the University of Wisconsin.