Signs of salary compression persist in the ranks for history faculty, as the gap between average salaries for historians in the junior and senior ranks narrowed for the fourth year in a row. The only piece of good news—such as it is—is that the difference in average salary between historians and the rest of academia did not grow.

The annual salary survey from the College and University Professional Association for Human Resources (CUPA-HR) is the only study that tracks salaries at the disciplinary level.1 Unfortunately, the survey was tweaked this year, and now separates out non-tenure-track faculty from the results, which makes it impossible to compare average year-to-year salaries for the discipline as a whole.

Nevertheless, the study provides valuable benchmarks for average salaries at each rank in the discipline, and relative to the rest of academia. The report estimates that the average salary for newly hired assistant professors in the discipline is $55,109 in the current academic year, as compared to $65,114 among all disciplines outside the health sciences. Assistant professors with more than a year’s experience in a history department were paid only marginally better, reportedly earning an average of $55,270. 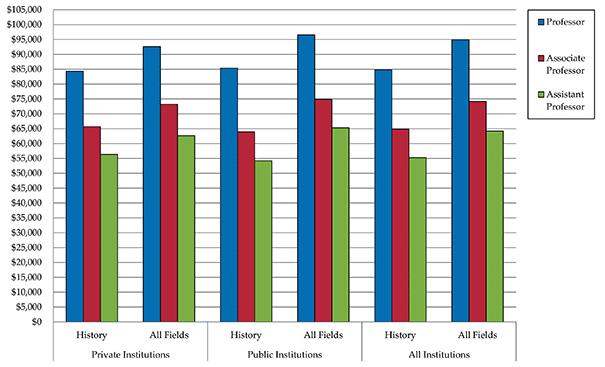 On average, historians at private colleges and universities at each rank earned about $2,000 more than their counterparts employed at public institutions (except at the full professor level, where faculty in private institutions earned an average of $1,069 more than their counterparts). The lower salaries at public institutions are so low, in fact, that the authors of the report singled out the average salary for historians in those institutions among the bottom three—coming in only modestly above English languages and literatures and the visual and performing arts.

Average salaries for historians at the associate professor level in private colleges and universities were also singled out as among the lowest for that rank.

Over the past five years, the gap between entry-level and senior-level salaries in history departments has narrowed modestly. In 2007–08, the average salary for assistant professors was 36.9 percent lower than that of full professors, and 17.3 percent below that of associate professors. The difference tightened to 34.8 percent and 14.8 percent, respectively, in the most recent survey.

The issue of salary compression at the senior ranks has been a subject of increasing concern across disciplines and academic systems over the same period, reflecting a diminishing financial advantage for experience and service at an institution.2

It is quite possible that the change is due to the adjustment in this year’s survey, which now shows only tenure-track faculty salaries. If so, it suggests a significant proportion of faculty hired at the entry level without hope of tenure, since the number of jobs posted this past year was slightly higher than the year before.3

Despite the decline in overall numbers, the proportion of the institutions that reported hiring new faculty actually increased slightly—rising from 25.1 percent for the 2011–12 academic year to 25.5 percent this past year. The increases, while quite modest, occurred at both public and private institutions (fig. 2). 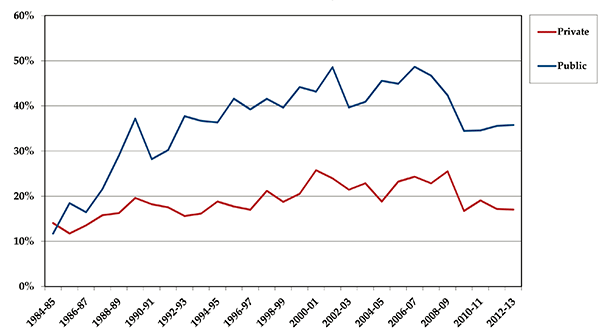 1. CUPA–HR, National Faculty Salary Survey by Discipline and Rank in Four-Year Colleges and Universities (Washington, DC: College and University Professional Association for Human Resources, 2013). The report draws on data gathered from 794 public and private institutions, which reported on 184,924 faculty members. The average provided is only for a nine- or ten-month salary, and does not include any benefits.