Bringing Scholarship to Life: Decolonization in the Classroom

The National History Center's (NHC) International Seminar on Decolonization supports advanced research into an emerging area of scholarship, but it also does more: alumni of the seminar are using what they learned in the seminar in their own classrooms.

The seminar is sponsored by the Andrew W. Mellon Foundation and conducted by the NHC in partnership with the John W. Kluge Center at the Library of Congress. Each year it brings 15 early career historians to Washington for four weeks of research, discussion, and writing on decolonization, broadly defined as the dissolution of empires and the subsequent emergence of former colonies as new nations, mainly in the 20th century. The seminar will welcome its eighth cohort of scholars this July. 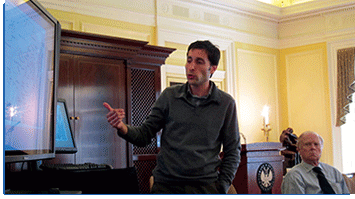 Since its inception in 2006, its 104 participants have published books and articles, made presentations, and organized conferences. But perhaps most importantly for this new subdiscipline, they teach decolonization history, in settings ranging from small liberal arts colleges to Research I institutions with 50,000 students to the Marine Corps University's Command and Staff College. They offer graduate seminars, reading colloquia, and research methods courses focusing on the subject. They also incorporate it into survey courses based on geographic areas and time periods. And they conduct workshops for K–12 teachers who bring the study of decolonization into the schools.

David Campion, a member of the 2007 seminar who studies the British Empire and South Asia, runs an undergraduate reading colloquium, Empire and Independence in the Modern World, at Lewis & Clark College in Portland, Oregon. Students read, listen to, discuss, and write about decolonization from the Indian subcontinent to Algeria, Kenya, and South Africa. On his course website, he sets out an ambitious plan that allows his students to teach each other. He also offers an extensive list of films that portray decolonization.

"The personal contacts I made in the Decolonization Seminar have paid dividends in the classroom. I often assign the writings of those colleagues and I feel comfortable encouraging the students to correspond with the authors via e-mail," Campion said. "This provides my students not only with a stronger understanding of the works they are reading and discussing and the research process, but it gives them a positive view of the collaboration and collegiality that takes place among academic historians."

Anne Louise Antonoff (2006), who has written about the Balkans, will soon offer a course on decolonization to Marine Corps officers. But the subject has influenced much of what she teaches, including military history. "One needs to understand the 'story behind the story' to be able to grasp the origins and evolution of such things as the Iraq War, the Arab Spring, Libya, and Mali," she said.

Berny Sèbe (2007), a scholar of the French empire, has taught Experiencing Empire: The British Empire from 1815 to 1997 at the University of Durham (UK) and incorporates decolonization into his courses on Franco-African relations and the making of modern Africa at the University of Birmingham (UK). In her survey classes at Grinnell College, Britain and the Modern World, and Southern Africa, Elizabeth Prevost (2010), a scholar of gender, colonialism, and Christianity, uses two modules on decolonization from the Reacting to the Past role-play series to engage students.

Chantalle Verna (2006) is a specialist in Caribbean and Latin American history at Florida International University, a large, primarily Hispanic-serving public institution. She covers decolonization in several courses, including Modern American Civilization and International Relations of the Caribbean. She has also led US Department of Education-funded teacher training workshops to help Florida's public school teachers incorporate themes, evidence, and analytical concepts from decolonization into their classes. Penny Sinanoglu (2007), who studies the British in the Middle East, recently taught her first course on decolonization at Wake Forest University. "My students were all American and were deeply intrigued by the notion of America as a colonial and postcolonial power," she noted.

Lori Watt, a scholar of modern Japan, teaches decolonization as a historical methods course at Washington University in St. Louis. "Participating in the summer 2008 Decolonization Seminar transformed my teaching," Watt said. Decolonization in the 20th Century is now my favorite course and one that tends to produce thesis writers and successful applicants to graduate school and national fellowships, for example, the Luce." Watt provides her students with an online overview of key actors and concepts in 20th-century decolonization, available on the NHC website. She will serve on the faculty of the Decolonization Seminar this summer.

Marian J. Barber is the associate director of the National History Center.

Tags: From the National History Center Resources and Strategies