Between Tolerance and Persecution

Media in both the Middle East and the West were buzzing this past summer with discussions of the Egyptian TV series Haret El Yahood (The Jewish Quarter). Broadcast on several Middle Eastern stations both within and outside Egypt during the past Muslim holy month of Ramadan, this soap opera’s opening episodes are set in 1948. The main character, Layla, who is Jewish, is engaged to a Muslim man, Ali, an officer of the Egyptian army. 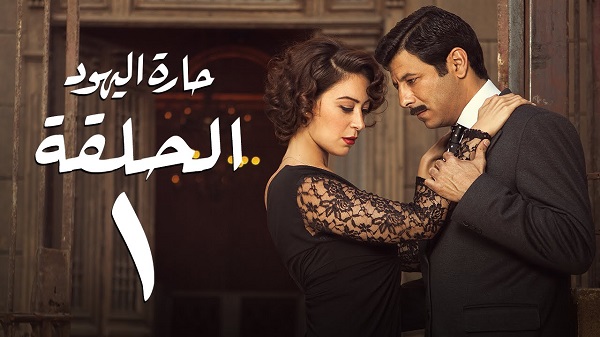 Haret El Yahood opens with beautiful scenery, sets, and costumes; the background music is performed by the City of Prague Philharmonic Orchestra. Layla, a strong young woman who quotes Simone de Beauvoir in conversation, is a true Egyptian nationalist, but her family is divided. Her father believes that Israel’s treatment of the Palestinians is unfair and does not waver in his Egyptian nationalist sentiments, even after his shop is burned down. His son, however, leaves for Israel to help establish a kibbutz. “It was Israel before there was such a thing as Arabs,” he tells his parents, and then yells, “Read history!” The mother sympathizes with her son.

Written by Medhat El-’Adl, the show takes viewers from synagogue to brothel, from military camp to the shops and streets of Cairo’s Jewish Quarter, from Muslim Brotherhood training camps to a wealthy Jewish family’s villa. In true soap opera form, jealousy often drives the plot as Ibtihal, a Muslim woman who is also in love with Ali, threatens Layla’s happiness. Ibtihal’s father blackmails the Jewish community, forcing them to pay him money in exchange for not hurting them.

The show made waves when it started airing in July, as media outlets reported on viewers’ responses. The Israeli embassy in Egypt, for example, congratulated the filmmakers after staff at the embassy watched the first episode, but then announced that it was displeased with the development of the plot. Newspapers in Egypt published op-eds, articles, and interviews with the actors, who made sure to remind viewers that not every Jewish individual agrees with Israel’s actions toward Palestinians.

The status of the Jews in Egypt has been in flux at least since the Byzantine Empire ruled the territory. In the fourth century, the Theodosian Code, a compilation of Roman laws, confirmed the Jews as second-class subjects belonging to a disgraced creed, according to Jane Hathaway, professor of history at Ohio State University. “From that perspective, the Muslim conquest of Egypt in the seventh century was something of a relief,” she said in a phone interview, “even though they became a different kind of second-class citizen by virtue of not being Muslim.” Under the Fatimid caliphate (969–1171), the status of Jewish communities improved significantly. At least two Fatimid rulers appointed Jewish viziers. Scholars have considered the next periods in Egyptian history, the Ayyubid and Mamluk periods (1171–1517), to be less positive for the Jews, although a more nuanced view of their status is slowly taking shape.

The understanding of the history of Jewish populations living under Muslim rule is becoming more complicated, Hathaway argues. Scholars are asking questions that were not exhaustively discussed before—for example, “What exactly does tolerance mean? What role did class differences play in the manner in which different groups of Jews were treated?” Hathaway cites Princeton professor emeritus Mark R. Cohen’s discussions of scholarship on Jewish communities under Muslim rule during the premodern period: Traditionally, the status of Jews in the Middle East was compared to their status in medieval Europe, where Jewish history was seen as “an unending tale of woe,” she says. “From that perspective, Jewish experience in the premodern Middle East was quite positive.” Other scholars have made the argument that Muslim societies consistently persecuted Jewish communities among them. “The growing awareness is that when you have these two poles, tolerance and persecution, neither of them is well-defined,” Hathaway explains. “The presentation of the Jewish experience seems schizophrenic.”

A better approach, she suggests, is to study Jewish communities as part of society as a whole. To do so, scholars would no longer see “Jewishness” as the only salient part of the community’s identity; Jewish merchants, for example, might have had more in common with Muslim merchants than with nonmerchant Jews. Scholars also need to examine the difference in the Jewish experience in large metropolises, such as Cairo and Alexandria, compared with that in small towns.

In the Ottoman period, which Hathaway studies, the status of Jewish communities tended to fluctuate according to the larger society’s overall economic situation. But the economic landscape of Egypt—within and outside of Jewish circles—was increasingly precarious in the 19th century. “What happens to minority populations in any society, including the US, when there’s an economic downturn?” Hathaway asks rhetorically. “They become vulnerable because they are sometimes blamed for the crisis.” Cairene Jews were no exception, she notes, adding that European visitors sometimes reported dire poverty among Cairo’s Jewish population. “The synagogue in Fustat, today a southern neighborhood of Cairo (and historically the Coptic quarter), was home to the famous Cairo Geniza, a trove of documents offering evidence of Jewish community life throughout much of Egypt’s Islamic period. By the 19th century, this neighborhood, where the great Jewish philosopher Maimonides had once lived, was little better than a slum.”

Fast-forward to the 1950s, when the Jewish communities in Egypt were still mostly poor and lower middle class, with some exceptions. “There was a very small portion of the Jewish community that was extremely wealthy and that dominated in the financial sector,” Joel Beinin, a Middle East history professor at Stanford, said in a phone interview. But the wealthy class would not have lived in Cairo’s Jewish Quarter, and the upper middle class would have moved out of the neighborhood by the late 1940s. “If this had been set in the Abbasiyya neighborhood, the social interactions in the show would be more appropriate. Muslims, Christians, and Jews lived there together, and there were few social frictions,” Beinin says. “Another place that this would have happened was up the class ladder, in the Zamalek district. That’s where the elite classes would have moved to.”

As to why the series did not stick to the facts in the matter of economic status, Beinin speculates, “The series is trying to present what is probably the most sympathetic portrayal of Jews in the mass media since the 1950s. It’s portraying a middle-class milieu that’s the typical milieu of Egyptian film and TV series. It’s unusual for TV serials to focus on really poor people. So this is part of the canonical convention of representation above and beyond anything having to do with Jews.

“The Jewish community was highly integrated. There was no systematic discrimination against Jews,” Beinin continues. “There were lots of intermarriages, and the higher up you went, the more common it was. Not in Haret El Yahood, the Jewish Quarter, because they were poor and more traditional. They wouldn’t have been in situations where they would meet Muslims who were open to these kinds of relationships. Their Muslim neighbors were similarly traditional. But it was more common among the business classes and the elite.”

Sympathetic portrayals of Jews in Egyptian entertainment have been increasing over time, Beinin says. “Before 2011, there were a fair number of younger Egyptians, those under forty-five, who had begun to ask questions about the version of their history that they had been taught, in high school in particular, which is ridiculous. They come into contact with Jewish people, they travel, they see that the stuff they had been taught doesn’t work.” Beinin remembers teaching at the American University in Cairo, where he taught a course on Zionism and modern Judaism. In that course, he emphasized the same point the series makes: Not every Jew should be implicated in Israel’s human rights violations.