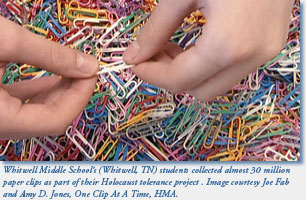 A generation ago, social historian Gerd Korman observed that "there is no Holocaust phenomenon in the historical writing of Clio's disciples in the United States, except among practitioners of Jewish history and Jewish intellectuals."1 Although much has improved since the 1970s, historians continue to seek more effective ways to educate their students about the Holocaust. Paper Clips, a film that I have enjoyed, can be used quite effectively at several levels, from high school to college classes. Nonetheless, the compelling story it tells remains oddly exemplary of the problem that Korman noted because it doesn't show in depth just how the youngsters involved actually achieved substantive knowledge of what happened. Hence it could be used as an engaging supplement in a broad range of courses touching upon modern America, education, and community cohesion; yet it should not stand alone in any lesson plan concerning the Holocaust, despite its undeniable charm.

Paper Clips (2004, 82 minutes) is a deceptively simple documentary about tolerance and understanding—more specifically, teaching secondary school students in a small, rural, homogeneous community in Tennessee about history. Whitwell is a Christian town of 1,600, some 25 miles from Chattanooga (and not far from Dayton, site of the Scopes Trial in 1925) with no Jews, five blacks, and one Hispanic. Linda Hooper, a dynamic and articulate principal of the middle school for nine years and the dominant, connective voice throughout the film, describes her town as "poor but not depressed" ever since coal mining went bust at the end of the 1960s. When it occurred to her that the school ought to have a project concerned with diversity and tolerance, she sent one of the two eighth-grade teachers to a conference held in Chattanooga in order to come up with an organizing concept or focus. David Smith returned with the idea of studying the Holocaust, and along with his fellow teacher, Sandra Roberts, plus strong encouragement from Principal Hooper, they went to work.

When one student responded to the concept by remarking, "What is six million? I've never seen six million anything," it became clear that there was a problem of comprehending the sheer magnitude of what had happened between 1938 and 1945 in central Europe. So the decision was made to collect and count six million paper clips. Someone discovered that the paper clip had been putatively invented in Norway during the later 19th century and that Norwegians wore them during World War II as a sign of resistance to Nazi fascism.2 So the students wrote letters to various people, including celebrities, explaining the project and asking them to send paper clips. They went to the internet, created a web site outlining the project and its rationale, and soon the school received their first shipment: 100,000 paper clips. At first the intake was slow, but a married pair of German journalists based in Washington for 20 years noticed the web site, and called it to the attention of the Washington Post, which ran a feature story about this curious scheme. It then got picked up by other media, including NBC News with Tom Brokaw, prompting a deluge of paper clips, every one of which had to be counted. Eventually the grand total reached 29 million.

Both teachers wanted to break down stereotypes about people who were different, expand the horizons of students they considered isolated and unworldly, and use a major historical "event" as a memory project that ultimately became a memorial project that bonded the entire community—and put it "on the map" to a degree no one could have anticipated. Twenty-five thousand letters were received and logged, each one containing paper clips. One letter came from a Holocaust survivor with 14 clips, one for each family member who had been exterminated. A suitcase arrived from Germany containing messages addressed to Anne Frank by students there, asking for her forgiveness. Everything that came in the mail, overwhelming the local post office, had to be recorded and placed in binders. Each school year between 1999 and 2002, the next cohort of eighth-graders continued the project, learning about the Nazis and those who had suffered in ghettos and the concentration camps.

In 2001 members of a five-town group of Holocaust survivors from just outside New York City decided to visit Whitwell. They wanted to see first-hand what these "kids" were doing, such as making a monument of discarded shoes (evoking the death camps), and learning about anti-Semitism. The survivors were warmly received in the Methodist Church on their first evening, where some gave testimony, explaining to townsfolk the horrors they had undergone. The students were deeply moved by the experience of meeting people who were part of the historic "episode" they had been studying, and the scenes of mutual admiration and affection between the survivors and townspeople are among the most poignant in the film.

After so much had been achieved, Linda Hooper mentioned at a casual dinner with the German couple, Dagmar and Peter Schroeder, that the school was so filled with paper clips (22 metric tons) that every broom closet was packed. Something innovative had to be done. She envisioned having an original German rail car that had been used to transport Jews in which to place the paper clips along with educational materials as a Holocaust memorial. The Schroeders took it upon themselves to crisscross Germany a total of 3,000 miles in search of one, and finally located a cattle car (made in 1917) in a deserted rail yard. The car, viewed as surprisingly small by the folks at Whitwell, would have held about 90 to 100 tightly packed prisoners.

Owing to an astonishing series of pro bono gestures, a Norwegian freighter brought the car (bearing a handsome sign: The Children's Holocaust Memorial) to Baltimore where the CSX line hauled it on a flat-bed car to Chattanooga, and then a trucking line (B & B Cranes) took it to Whitwell, where it was placed on tracks, carefully refurbished by volunteers from the town with materials donated by Home Depot and others, and made into a museum in which Linda Hooper chose to place 11 million clips, selected from donations by as many different people as possible, and from as many different locations: six million for the Jews and another five for the gypsies, homosexuals, and others who had died in the gas chambers. (We never learn what happened to the other 18 million clips stored in boxes and large cans.)

The rail car museum and memorial, which had been beautifully landscaped by volunteers, was dedicated on November 9, 2001, the exact anniversary of Kristallnacht, with deeply moving remarks by Principal Hooper, both Schroeders, students from the Whitwell school, the prayer for the dead recited by Jewish students from Atlanta, and songs by Jewish students who came from Nashville. One of the few "false notes" (if it was that) came from the admirable Linda Hooper when she declared: "Your history as a death car is erased. From here on you are a car of life." Although the sense of her sentiment is perfectly clear, we are reluctant to acknowledge that history can be erased, especially in what had become a memory project. Indeed, the words sung as the film ends are, "You must not forget" and "Don't let the memory disappear."

The project in Whitwell Middle School ended in 2003, though not entirely because the memorial has attracted large numbers of visitors, and the participating students became teachers themselves as "missionaries" when outreach began to schools in communities elsewhere. Eventually the students are seen wearing T-shirts bearing the slogan: "Changing the World One Clip at a Time." My major regret about this eloquent, thoughtfully filmed, and edited work, is that there are virtually no scenes of the students in class actually learning about and discussing the Holocaust. We see and hear many student voices as "talking heads," and they are earnest, even charming. But we get insufficient sense of the process by which information and understanding was transmitted. If that is a flaw in the film, it is compensated for by other strengths.

Joe Fab was the co-director of Paper Clips and Michael Marton did a superb job as director of photography for Hart Sharp Video; the multiple-award-winning documentary never lags or becomes maudlin. There is also a second and engaging DVD (84 minutes) containing "bonus material": a visual account of a class trip to Ground Zero following September 11, 2001, which included a Sabbath evening with Jewish students from northern New Jersey; testimonial interviews from several of the Holocaust survivors who made the trip to Whitwell; and pictorial shots showing in greater detail how the project developed and how the rail car actually made the convoluted journey from Germany to Whitwell. We learn that among the immense amount of positive correspondence received at the school, there were only 12 negative or threatening letters.

At one point Linda Hooper with her snow-white hair, always graceful and crystal clear, remarks that "the scariest thing in the world is to be a teacher." Why? "Because you can have so much impact." One of the students, in what comes across as a moment of epiphany, responds, as though never having noticed before: "You make us think!" Hooper also says in her introductory remarks that "We're ordinary people," and that is echoed by teacher David Smith who deprecates himself and his town several times with genuine humility. Ultimately, the good folks of Whitwell, Tennessee, turn out to be anything but ordinary. They transcend time and place; the experience transformed them; and they have justly achieved international renown.

Having said that much, it should be acknowledged that the educational value of this documentary is no substitute for the work being done by the U.S. Holocaust Museum, by Facing History and Ourselves, and by the Shoah Foundation Institute based at the University of Southern California. Yet Paper Clips does provide us with a fresh way of considering the ceaselessly complex quest and relationship between history and memory in a small American community.

—Michael Kammen is the Newton C. Farr Professor of History, Emeritus, at Cornell University, where he taught from 1965 until 2008. One of his recent books is A Time to Every Purpose: The Four Seasons in American Culture (Chapel Hill: University of North Carolina Press, 2006). He is the author of "The American Past Politicized: Uses and Misuses of History," in The Annals of the American Academy of Political and Social Science, vol. 617 (May 2008).

2. The paper clip was actually first patented by an American in 1867; but that would have spoiled a tidy historical connection, so the film overlooks the U.S. invention in favor of the flawed Norwegian latecomer.