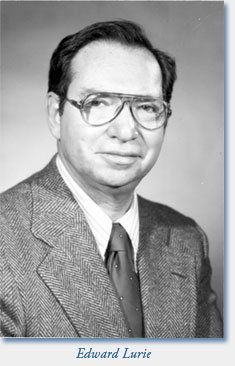 Edward Lurie, of Santa Fe, New Mexico, professor emeritus of history at the University of Delaware, died on March 8, 2008. He had been in declining health for several months.

Lurie was the author of the path-breaking biography, Louis Agassiz: A Life in Science (1960, 1988), a book described by the late Stephen Jay Gould as "the best work on this central figure in the history of American biography and probably the best biography in the last fifty years on the life of an American biologist." Louis Agassiz was designated one of the 100 classic works of Americana in the John F. Kennedy White House Library. Lurie also wrote Nature and the American Mind: Louis Agassiz and the Culture of Science (1974), and was editor and author of numerous scholarly articles on American science and culture.

Lurie was born April 10, 1927, in New York City, the son of Alexander and Ella (Lottman) Lurie. He served in the United States Navy in World War II, and was stationed on Saipan when the war ended. He earned a bachelor's degree at Sarah Lawrence College in 1949, then a master's degree (1951) and doctoral degree (1956) from Northwestern University. He taught American history and the history of science and culture at the Massachusetts Institute of Technology, the University of Michigan, Wayne State University, the Milton S. Hershey Medical Center at Pennsylvania State University, and the University of Delaware, where he was a professor for 25 years. He was awarded a Guggenheim Fellowship, a Social Science Research Council Fellowship, a Rockefeller Fellowship, and grants from the National Science Foundation, the American Council of Learned Societies, and the American Philosophical Society. He also held research fellowships at Yale University and at Harvard University.

He was married first to Nancy Oestreich in 1951. They were divorced in 1963. He is survived by his wife of 40 years, Janice Ferguson Lurie; his stepchildren, Kathy Wilson, of Avondale, Pennsylvania and Russell Snodgrass, of Albuquerque, New Mexico; his sister, Sharon Herald, of Los Gatos, California; and his stepgrand daughter, Kathryn Freeman, of Greensboro, North Carolina.

Ed Lurie's friends, colleagues, and students will remember his ready sense of irony and his way with words. I especially recall an instance from 1996, when I received an award from the University of Delaware. By then Lurie had retired and moved to Arizona. While I was basking in self-congratulation, I received a telephone call from a man with a pronounced southern accent. The caller was Ed Lurie, but Ed didn't identify himself. Instead, the caller said he was "Frank Vandiver" (that is, "Vandivah"—with no consonant at the end of the name). He said he was a former "Govenah" of Georgia, and he wanted to extend a word of personal congratulation. He said he was "delighted to know that a university was giving an award to someone who had written about American race relations with sympathy and understanding for the special problems of southern white folks." I didn't know what to say about that, but as I was fumbling for words "Govenah Vandivah" continued to say that he regarded my work so favorably that he was going to nominate me for membership in a special southern society, the Peachtree Branch of the Knights of the White Camelia. I was still perplexed when Ed identified himself as he lapsed back into his usual New York accent. Ed Lurie was a scholar and a character, and a lot of fun to be around.