Della McDuffie’s official death certificate states that she died in 1953 from a cerebral hemorrhage, caused by a condition preceding her death. The night of her death, the sheriff of Wilcox County, Alabama, raided the café she owned with her husband. An elderly and disabled African American woman, she was unable to flee during the turmoil. The FBI declined to pursue an investigation—even after her husband died the next year under mysterious circumstances. According to NAACP legal records, however, Della McDuffie was beaten to death. 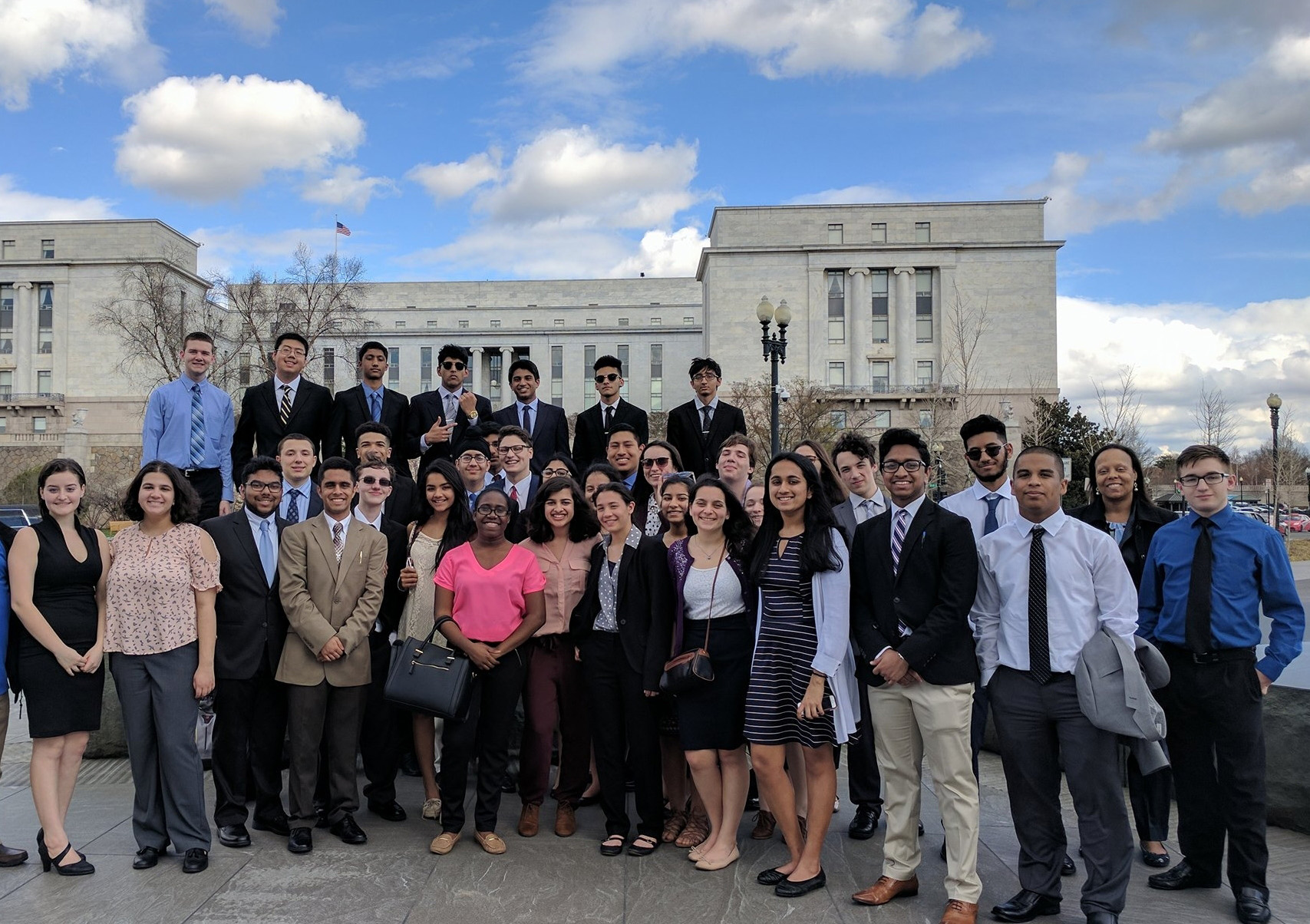 Since 2006, the FBI has identified over 100 unsolved murder cases from the civil rights era, most involving African Americans allegedly slain at the hands of hate groups. Under the Emmett Till Act of 2007, the FBI and Department of Justice (DOJ) began reopening these cases. As of June 2019, the DOJ has fully investigated 116 cases, closing 104 of them without prosecution or referral to states. Only two have been federally prosecuted.

While discussing the Civil Rights Movement in the fall of 2015, Stuart Wexler’s AP Government students at Hightstown (New Jersey) High School became frustrated over the lack of publicly available information regarding cold cases. After experiencing the inefficient process of requesting documents through the Freedom of Information Act, the students began drafting a bill closely modeled on the JFK Records Act but designed to address civil rights cold cases.

On January 8, 2019, nearly four years of relentless phone calls, draft edits, and lobbying trips to Washington, DC, paid off when President Trump signed the Civil Rights Cold Case Records Collection Act into law. With Trump’s signature, congressional historians believe, the Hightstown students are likely the first high schoolers to write a law passed by Congress and signed by a president.

Oslene Johnson, a rising sophomore studying public policy at American University, was initially apprehensive about undertaking such a daunting project. “When [we] started on this I’d just turned 16,” she says. “We’d never seen congressional text before. We had no idea what that was supposed to look like.” Looking back through the lens of subsequent events, Johnson sees the project as critical to civic life—and to history. “I’m [now] 20 and I’m able to see parallels from decades before I was born,” she says.

Wexler and his students began work on the bill not long after the massacre of nine worshippers at a historic African American church in Charleston, South Carolina, and continued their efforts under the shadow of the deadly Unite the Right rally in Charlottesville, Virginia. They hope that shedding a light on racial terrorism from the 1950s and 1960s can help combat these more recent manifestations. The Civil Rights Cold Case Records Collection will serve as a database of cold case records that federal agencies, including DOJ, are required to turn over. Housed at the National Archives, the collection will also be digitized for the public to view online.

As the bill took shape, the class (plus other interested Hightstown students) poured themselves into the project, with groups devoted to reworking language, contacting civil rights attorneys, and performing lobbying and media outreach. All the while, they balanced work on the bill with their lives as high schoolers. “We just kept going, blindly so,” Johnson remembers. “We had no precedent for a class doing this . . . [and] the entire time you’re still thinking about the AP test.”

The students lacked the funds and resources of a professional lobbying firm. One challenge, says 2017 Hightstown graduate Lydia Francoeur, “was trying to overcome that perspective that young people can’t really be interested in politics and make meaningful change. But the second we started talking and the [congressional] staffers understood that we actually knew our stuff and that we had an effective solution for a legitimate issue, that [stigma] usually went away.”

“Getting people to take you seriously is the most difficult thing,” confirms Tejan Patel, a senior at Hightstown who traveled with classmates to lobby Congress in Washington in July 2018. “There were many times when I walked into an office and a staffer would ask me how old I was or they would just stare at their phones.”

It helped that the students approached legislators with a strategy tailored to their districts. The students compiled a massive list of cold cases sorted by congressional district, using any reliable public and private sources they could find. Often, Francoeur remembers, “congressmen didn’t even know that they had had civil rights cold cases in their district and they were taken aback.”

In March 2018, students Prarthana Singh and Anna Trancozo traveled with Wexler to a Civil Rights and Restorative Justice (CRRJ) Project conference in Selma, Alabama, to present on their experience and to talk to veterans of the Civil Rights Movement. There Trancozo met Della McDuffie’s granddaughter, who wants to ensure the public knows her grandmother did not die of an illness.

“Getting people to take you seriously is the most difficult thing,” confirms Tejan Patel.

Indeed, students say, their primary motivation to pass the bill was to help the victims’ families, who still lacked answers as to how their loved ones had died almost 50 years earlier. “While some people might not see releasing information as justice, for the people whose families were affected, it is justice for them. Making sure the facts are straight and out to the public gives them that sense of closure,” says Trancozo.

“I think these cases, besides bringing some answers to a community of people and to the country about a dark chapter in our history, can get us to remember that this is not new and that we didn’t handle it well at the time. . . . We could have difficulty moving forward and addressing this stuff now because we never really addressed it back then,” says Wexler, who has written a book on the history of radical Christian terrorism in the United States.

Representative Bobby Rush (D-IL) introduced the bill in the House in March 2017, and Senator Doug Jones (D-AL) brought it to the Senate in July 2018. The bill passed the Senate via a unanimous voice vote on December 17, 2018, and then passed the House with a vote of 376 to 6 on December 21.

There were still more lessons to come. The act was passed with no appropriations attached, and so, since January, the students’ time has been largely spent lobbying Congress yet again, now to provide funding. On June 11, 2019, the House Appropriations Committee passed a FY 2020 Financial Services and General Government Funding Bill. The House FY20 bill includes $4.1 million to implement the Civil Rights Cold Case Records Collection Act of 2018. The Senate bill only provides $1 million for the initiative. The difference will have to be ironed out when Congress finally passes an FY20 federal budget.

The students have also been pressuring Trump to appoint members to the five-person review board established by the law to review cold cases and determine if their public release requires a delay. After signing the bill, Trump signaled hesitancy at granting the board powers to release such sensitive documents, particularly if they are covered by executive privilege. The class has been doing everything they can to get the president’s attention, from a continuous barrage of tweets to a face-to-face meeting with a staffer of Trump ally Representative Mark Meadows (R-NC) this summer.

The class wrote the bill with historians in mind, according to Lydia Francoeur, as the students saw that “they were the ones who were looking into these cases and solving them.”

In making appointments to the review board, the president may consider individuals recommended by the American Historical Association, the Organization of American Historians, the Society of American Archivists, and the American Bar Association for the first four positions. The president also has the authority to appoint a fifth person. The board must include at least one professional historian and an attorney. Trump received the fourth list of nominees in late July, according to Wexler.

“It’s only been a couple of weeks where the [appointees] could even be put in, but we’re hoping that [the administration is] aware of the time factor,” said Wexler in August. As victims, witnesses, and suspects age, there is a time limit on resolving many of these cases. Wexler stressed that he hopes this factor “encourages the president, especially in an atmosphere where we could use a story or two about bipartisan progress on issues related to race.”

The class wrote the bill with historians in mind, according to Francoeur. The students saw that historians “were the ones who were looking into these cases and solving them.” She hopes the law gives historians the tools they need to pursue such efforts and encourages them to further advocate on behalf of the act. “People, especially those who have studied history their whole lives, have no excuse to ignore the tragedies of this country’s past. We owe it to ourselves as Americans to try and help each other heal,” says Johnson.

Johnson and many of her classmates have continued to work on the bill in whatever capacity they can. One GroupMe chat to coordinate alumni still has over 60 members. When asked what advice they would give to those who wish to embark on a similar project or advocacy campaign, the Hightstown students gave a near-unanimous answer: you need stubborn persistence and passion for a cause you believe in. They pointed to a group of students in Tennessee who are currently writing a bill aimed at tackling cold cases under that state’s jurisdiction.

The class has inspired an even younger audience as well. One of Wexler’s former students, now a teacher at the elementary school he himself attended, showed a video about the Hightstown class’s accomplishment to her own students. After the presentation, one enthusiastic kid stated, “One of these days, I’m going to change the world like they did.”

Ethan Ehrenhaft is a Washington, DC, native and senior history major at Davidson College in North Carolina. He is co–editor in chief of The Davidsonian, the college’s student-run newspaper.