Thinking Big: Presenting the October Issue of Perspectives on History

Sometimes, when an issue of Perspectives is coming together, the editors will notice a theme linking several articles together, entirely unintentionally. 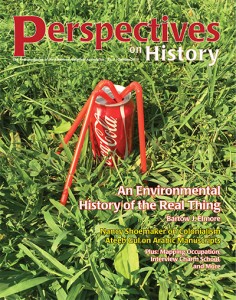 As we worked on the October 2015 issue, we discovered that we and our contributors were grappling with what might be called scaling up: taking stories, documents, and concepts that might seem small or narrowly focused and attempting to tell larger histories through them.

The theme is most pronounced among our feature stories. The University of Alabama’s Bart Elmore, in “An Environmental History of the Real Thing,” describes what he calls Coca-Cola capitalism—a business model the beverage company pioneered as far back as the 1920s, which resembles today’s outsourcing or offshoring. The Coca-Cola Company succeeded, Elmore argues, by doing less than its competitors, whether that was harvesting coca leaves or bottling the final product. As Elmore relates, his work was inspired by the fine print—the ingredients on each can of Coke—but as he researched, he found the big story.

Another Perspectives feature, Ateeb Gul’s “Shared Legacy,” proceeds from last July’s announcement of the discovery of one of the world’s oldest known fragments of a Qur’an—in Birmingham, England, of all places. But Gul, an editor at Oxford University Press, Pakistan, says we should not be surprised by the location of such precious manuscripts; a network of early modern European academics collected Arabic learned works, explaining why centers like Oxford and Leiden are valuable to scholars of Arab and Islamic history today. The Birmingham Qur’an is not simply a document prized for its sacredness; it also opens the door to understanding how Arab and European histories are intertwined.

We also present “A Typology of Colonialism” by Nancy Shoemaker of the University of Connecticut. Among historians of colonialism, Shoemaker sees a tendency to focus on settler colonialism, sometimes with the implication that there are no other permutations of “foreign intrusion or domination,” as she defines it. Instead, she offers 12 variations of the phenomenon, beginning with settler colonialism but also including the sole desire to plunder raw materials (“extractive colonialism”), the creation of “safe havens” for military or merchant vessels (“transport colonialism”), and the usurpation of territory by private entities, such as filibusters (“rogue colonialism”). By challenging us to think more specifically about colonialism, Shoemaker suggests that broader analysis is possible.

The October issue also unveils the theme of the 131st annual meeting, which will take place in Denver in 2017. It may not be a coincidence that AHA president-elect Patrick Manning, Program Committee chair Anand A. Yang, and co-chair Edda L. Fields-Black chose “Historical Scale: Linking Levels of Experience” as the meeting’s theme. One challenge historians face today is to tell stories of broad significance while attending to the details that distinguish our craft. The 131st annual meeting theme pushes us in this direction. (NB: acceptance of session proposals is not contingent on addressing the theme.)

There’s much more in the October issue of Perspectives, including important information about AHA elections and a preview of what’s in the new issue of the American Historical Review (including a Roundtable on the crisis of the humanities around the world and an AHR Conversation about historical causality).

Every day at AHA headquarters, something will remind us that our diverse membership gives us sustenance of all sorts. It’s not just dues—though we couldn’t exist without them—it’s also the vibrant, sustained engagement in the Association itself that reinforces our convictions that history matters and that AHA members possess a commitment not only to the discipline but to public life. Since Perspectives isn’t sold on newsstands, most of its readers (of the print version, anyway) are members, and it’s hard to express what a privilege it is to be able to reach some of the world’s most nimble minds. So if you’re reading this and you’re not a member, please consider becoming one. Perspectives on History is only one benefit of membership, though I hope it’s an attractive one. We hope to hear from you, and we hope you’ll join us!