The October 2015 issue of the American Historical Review is shaped by some comings and goings at the journal. After more than a decade of dedicated and productive service as editor, Robert Schneider moves on (to a much-deserved leave at Oriel College, Oxford). To an extraordinary degree, Rob has shown a knack for innovation while keeping the journal on an even keel during a period of upheaval in academic and scholarly publishing. The October issue, transitional as it is, still bears many of his customary marks—a lively AHRConversation on historical causation that he organized and moderated; a stimulating AHRRoundtable on the crisis of the humanities in global perspective; and the usual complement of first-rate articles and featured reviews. After serving as associate editor since January 2014, I am stepping in as interim editor for a year, while the search for a new full-time editor continues. I will be joined by Konstantin Dierks, returning to the journal as associate editor, as well as a new book review editor, Donna Peterson. The journal welcomes as well four new members of the Board of Editors, whose three-year term commenced in June 2015: Ruth Mazo Karras (medieval history), Sarah Maza (modern European history), William Rowe (Asian history), and Claudio Saunt (early American history).

The AHR Roundtable and Conversation are preceded by two articles, one on the application of colonial law in the tumultuous northwest frontier of 19th-century British India, and one on the problem of the “translation”—linguistic, material, and religious—of medieval and early modern texts. The eight featured reviews are followed by our regular extensive book review section. 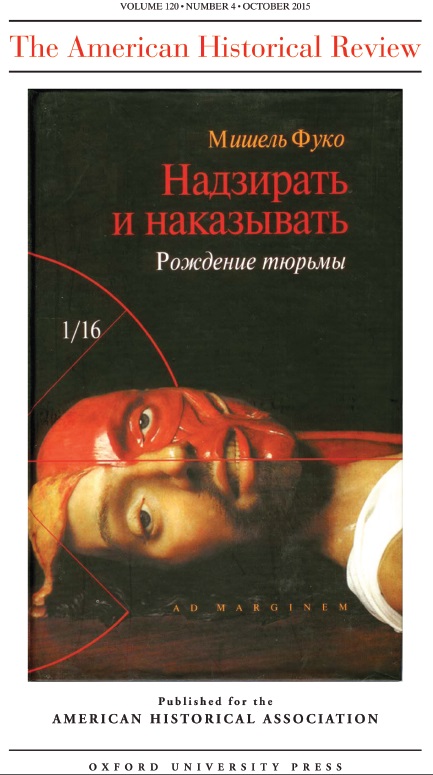 In “Translations: Words, Things, Going-Native, and Staying True,” Michael Wintroub (Univ. of California, Berkeley) reconsiders the practice of “translation” well beyond the rendering of one language into another. In Wintroub’s account, translation also has appeared as a discursive and material practice instrumental to the extension of power and authority across time and space in the early modern period. He advances this argument through a series of entangled case studies drawn from both Europe and the Americas, including the translation of ancient texts, the traffic in religious relics, the transubstantiation of the Eucharist, and the circulation of coin specie as a medium of exchange.

Nadzirat' i nakazyvat': Rozhdenie tiur'my, the Russian translation of Michel Foucault's famous monograph Surveiller et punir: Naissance de la prison (1975; in English, Discipline and Punish: The Birth of the Prison), was published in 1999 by Ad Marginem in Moscow, Russia's leading publisher of postmodern translations. In "From Priests to Pathfinders: The Fate of the Humanities and Social Sciences in Russia after World War II," Oleg Kharkhordin discusses the influence of French postmodernist theory on the development of the humanities in Russia, where Foucault, Pierre Bourdieu, Roland Barthes, and Jacques Derrida are viewed as offering a new way to analyze literary genres and everyday practices. Kharkhordin's article is one of the eight contributions in this issue to an AHR Roundtable, "The Humanities in Historical and Global Perspectives."

In “The Colonial Rule of Law and the Legal Regime of Exception: Frontier ‘Fanaticism’ and State Violence in British India,” Elizabeth Kolsky (Vanderbilt Univ.) examines the creation of a legal “state of exception” on the northwest frontier of British India. British officials viewed this corner of the empire as a dangerous place overrun with Muslim “fanatics” who were determined to kill members of the ruling race. The discourse of fanaticism provided the conceptual framework for unleashing and legitimizing the terror of empire within a legal framework normally devoted to rational discourse and the imposition of the rule of law. Kolsky’s article contributes to scholarship on law and colonialism and colonial violence by revealing how at one particular edge of the British Empire, colonial rule pressed against its own limits of legality and produced new forms of law that licensed what in other institutional contexts would have been considered lawless violence.

The October Roundtable constitutes a critical response to the generalized sense among historians of an ongoing “crisis” in the humanities. It is no secret that humanities education in the United States appears to be under attack, charged with being unpractical, self-indulgent, nonvocational, and out of touch with market values. For the most part, universities have responded to these attacks by shifting resources away from the humanities, rather than by forthrightly defending their contribution to the greater good. Taking a more global look at this phenomenon, the eight contributors to the discussion cover the recent history and current status of the humanities in South Africa, China, Russia, Britain, the United States, Mexico, the Middle East, and India.

Keith Breckenridge (Univ. of the Witwatersrand) argues that in South Africa, scholarly and official anxiety about the condition of the academic humanities derives from the abrupt demise of the unusual moment of popular and political humanism that coincided with the revolt against the apartheid state in the 1980s. Historically speaking, in a racially divided society, the South African humanities have been tormented by the fraught relationships between white and black writers from their beginnings. Paradoxically, these same conditions have fostered the development of globally significant humanities scholarship, Breckenridge suggests.

Hsiung Ping-chen (Chinese Univ. of Hong Kong) sees the Chinese humanities as the modern academic embodiment of an ancient civilization that has been represented politically and intellectually from both within and beyond its borders. She compares the strengths and weaknesses of these transnational and national traditions in Chinese humanities scholarship.

Peter Mandler (Cambridge Univ.) surveys the fortunes of what are called “the arts” in the British academy over the past 70 years. In these decades, he argues, the humanities have fared rather better than the sciences in the transition from elite to mass higher education. The humanities have been fortified by new arrivals in the creative arts, and they seem to have been better suited to new social and economic conditions than the sciences. In Mandler’s view, then, the pervasive sense of crisis is somewhat overstated, at least in the United Kingdom.

Michael Meranze (UCLA) couldn’t disagree more with Mandler’s portrayal of Anglo-American intellectual life. Present challenges to the humanities in the United States, he contends, lie not in a purported decline in student interest but in the humanities’ place as a symbolically central but structurally subordinate part of American higher education. As a result, the humanities and interpretive social sciences have borne the brunt of repeated controversies over the place of colleges and universities in American society. In the present moment of ongoing financial crisis, the humanities are overburdened and underrecognized both within and beyond the university.

Erika Pani (UNAM, Mexico City) maintains that despite Mexico’s strong literary, intellectual, and artistic traditions, the country has become a cultural wasteland where people do not read. Her essay seeks to understand the ongoing part played by the “human disciplines”—the study of the Greco-Roman classics, of philosophy, literature, and history—in the densely intertwined, contentious debates over education and culture that have punctuated Mexican history to this day.

Shifting perspective to the Middle East, Abdulrazzak Patel (Oxford Univ.) seeks to recuperate an important humanist tradition often neglected by Western scholars and a Eurocentric vision of the humanities. The focus of Patel’s essay is this much-neglected Arab Islamic tradition of humanism specifically as it relates to Egypt, Syria, and Lebanon.

The roundtable concludes with an essay on the fate of the humanities on the Indian subcontinent by Sanjay Seth (Goldsmiths). Seth suggests that the “crisis in the humanities” in India is part of a more general crisis in higher education there, as university attendance is invested with a symbolic load disproportionate to any “realist” or instrumental measures of its significance.

This year’s AHR Conversation, “Explaining Historical Change; or, The Lost History of Causes,” will bethe last introduced and moderated by outgoing editor Robert Schneider. The conversation brings together five scholars—Emmanuel Akyeampong, Caroline Arni, Pamela K. Crossley, Mark Hewitson, and William Sewell—to discuss competing modes of historical narrative. Should historical practice traffic in efforts to explain change over time? Or, rather, is it more attuned to creating dense portraits and thick descriptions of particular moments? This longstanding tension between diachrnoic and synchronic approaches to the past animates the lively exchanges among these expert practitioners of the craft.

December’s issue will include another major roundtable, this one on “How Civil Wars End”; a pair of stand-alone articles (one on the cultural politics of Jerusalem’s Western Wall, another on the significant role played by astrology in the prognostications of the 18th-century Russian nobility); and a review of the digital history site Slave Revolt in Jamaica, 1760–1761.

Alex Lichtenstein is interim editor of the American Historical Review.