Drunk History in the Classroom

“And it all goes downhill from there”: harsh words last January from the Daily Mail Online about Drunk History (UK), an American import to British television. What so peeved the newspaper were the show’s mistake-riddled historical retellings and flagrant drunkenness. Drunk History began in the United States in 2007 as a Funny or Die web series; Comedy Central picked it up in 2013. In each episode, an inebriated comedian em a historic event while well-known actors perform the account. This is not a promising scenario for historians. But the show’s incoherence and plethora of misstatements are exactly why it can be valuable in the classroom.

My syllabus for History, Memory, and Tradition was already written when I read Erik Moshe’s November 2014 essay “Are You Drunk on History?” on the History News Network website. I had one of those dangerous pedagogical inspirations: “Why don’t I have students apply the course’s theories to this show?” The junior-level course had been built around theoretical texts (Pierre Nora’s “Between Memory and History: Les Lieux des Mémoire,” Maurice Halbwachs’s chapters on individual and collective memory, and Benedict Anderson’s concept of imagined communities) and a series of US-focused case studies (for example, the civil rights movement, Sojourner Truth, and Marilyn Monroe). The Drunk History episodes, I thought, could provide additional case studies.

So I took a risk: I created a major assignment using Drunk History excerpts. After researching the historical facts and errors from short clips of their choosing, students analyzed the narrative in terms of the course’s theoretical arguments. For example, was memory—historical, collective, individual—at work in the narrative? Where was history, as defined by Nora and Halbwachs and by the professional standards of historical practice? On a broader level, students evaluated the efficacy of Drunk History as a popular history project: did the episode encourage historical thinking? 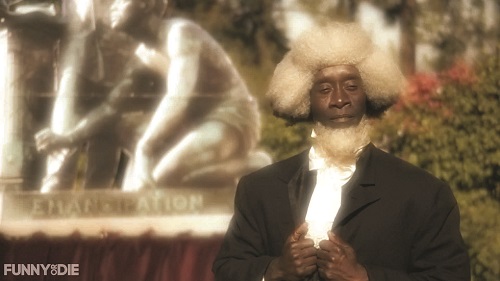 The drunken storytelling, the hampered narrator, the profane retellings: students concluded that these characteristics encouraged viewers to think like historians, to question evidence, weigh perspectives, and verify fact. Above all, as one student concluded, the drunkenness “makes the historical story funnier.” Dry, “objective” historical narrative became funny, entertaining, engaging. How? Well, the students agreed that people like to watch other people act stupid. Yet the entertaining aspects were also surprisingly historically nuanced: Don Cheadle, playing Frederick Douglass, appears in Douglass’s traditionally noble, forthright mode, introduced with a flash of the beautiful 1844 portrait of him now in the National Portrait Gallery. Then Cheadle pats the sides of his natural hair. That gesture gets at one of the most symbolically powerful attributes of Douglass’s physical appearance and points to Douglass’s resonance in contemporary American culture.

I suggest that those of us in the business of teaching history and producing historical narrative take as a virtue, not a flaw, the fact that Drunk History presents our discipline as entertaining. As my students told me, “entertainment” need not imply passively consuming mass culture; instead, they saw the entertainment value of Drunk History as moving viewers to assume an active, participatory, and ultimately critical position.

The “discrepancies” between established historical fact and the emotionalized narration, as one student observed, “incites [sic] the interest of the viewer to try and figure out what actually happened.” Students put no trust in the narrators; every claim they slurred was fair game for fact-checking. Drunk History is built on interactive viewing practices; audience members are participants in meaning-making rather than the one-dimensional passive viewers historians bewail. One student noted, “The historical story the narrator tells is how they understand and remember the historical event . . . the drunkenness adds in [a] more emotional aspect to make the historical story funnier. They are adding in how they feel about the event they are telling about.”

In contrast to the neutral tone of serious historical documentaries, Drunk History offers self-conscious markers of stylized storytelling. Personal allegiances interrupt historical truth most straightforwardly. This is by design. As the show’s creator and host, Derek Waters, said last year, “They’re all stories that we’ve researched, and if there are false statements in there, we make it obvious that they’re false.” The show is about the tension between history and memory as distinct, competing narrative retellings of the past.

The profuse profanity in the show worried me, a lot. The arcane rules of bleeping mean that offensive terms (especially regarding women’s bodies and homosexuality) are not always censored. The assignment prompt noted my concern about this and offered an alternative project. In class, students had an ongoing discussion about the profanity. One argued that “a hiccup in the facts due to the drunkenness . . . gives us an opportunity to research.” The “hiccups” in the narrative—literal, physical eruptions of gas; inaccurate statements; metaphorical gasbag chains of profanity—marked the moments when the narrator shifted between history (objective, fact-driven, historically accurate narrative) and memory (laden with emotional nuance). High stakes equal intense language, and so “Lincoln’s no douche bag” and Aaron Burr is one.

The profanity is paired with on-screen alcohol consumption. Many history instructors will not be able to use Drunk History in the classroom, particularly those on campuses where binge drinking is an object of concern. Adolescent culture is infused with a commercialized social world of drinking; the show does nothing to disrupt the message that drinking is fun and funny. While my students tended to condemn the behavior, the drinking is integrated into the show itself. Still, the portrayal of inebriation presented opportunities to discuss how memory interacts with perceptions of the past.

In Historical Thinking and Other Unnatural Acts (2001), Sam Wineburg criticized the “pull of the familiar,” arguing that when society mines the past and grasps bits of detritus that seem applicable to the present, the past becomes a commodity without context, closed to unfamiliar thinking. The popularity of Drunk History lies in the familiarity of its narratives. But the show often highlights less well-known stories as well. Everyone in the class knew something about Rosa Parks, but the episode “Claudette Colvin and Rosa Parks” introduced them to Colvin’s refusal to give up her bus seat to a white woman before Parks’s historic action. Because the narrator explains activists’ arguments for not capitalizing on Colvin’s arrest, my students became interested in the evidence that civil rights efforts, such as the bus boycotts, were carefully considered, planned, and strategically deployed. Most of them had thought Parks’ actions were spontaneous before watching the episode.

Maurice Halbwachs argues that individual and collective memories are formed within “affective communities”; Drunk History is such a community. “The show often tells stories that are not in our collective memory, but because the show is so [popular] . . . it is becoming a part of our collective memory,” observed one student. As students watched the Colvin segment, they were part of a viewing audience (quantified by YouTube and understood through the shared medium of television broadcasts) and part of the class, sitting with their colleagues. Drunk History engages students in ways that encourage learning as well as augmenting, modifying, and even strengthening collective memory.

Helen Sheumaker is a lecturer in the Department of History and the Program in American Studies at Miami University of Ohio. She is the author of Love Entwined: The Curious History of Human Hairwork in America (Univ. of Pennsylvania Press, 2007) and coeditor, with Shirley Wajda, of Material Culture in America: Understanding Everyday Life (ABC-CLIO Press, 2007). Her current research project is on secondhand consumerism, collecting, and the construction of identity in the late 19th-century United States.