An Environmental History of the Real Thing

Seven years ago, I set out to write a history of how the Real Thing, Coca-Cola, affected real ecologies in the real world. What drew me to the project was the sheer ubiquity of this firm that started in my hometown, Atlanta, Georgia. Here was a company that operated in over 200 countries in 2015, consumed roughly 79 billion gallons of water at its bottling plants that year alone, bought more processed caffeine than any other business by the 1950s, was the single largest consumer of Peruvian coca leaves in the United States, and was the largest industrial user of sugar on the planet as early as the 1910s. In other words, here was a business with a massive environmental footprint, and I wanted to know what its growth portended for the ecological health of the communities in which it operated. 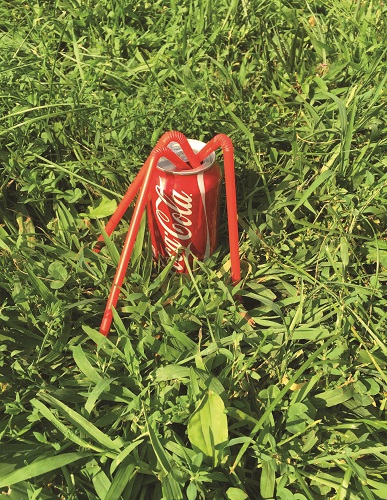 A central question drove my research: How did this bizarre “brain tonic” concocted in an Atlanta pharmacy in 1886 become one of the most recognized global brands in human history? As an environmental historian, I wanted to look beyond the advertising to consider the materiality of Coke. Certainly, fuzzy polar bears and rotund Santa Clauses helped attract consumers, but I wanted to know how the Real Thing became a real thing and ended up on retail shelves across the globe.

Call me a lazy graduate student, but I sought a simple organizational scheme for telling this story and ultimately decided to rip the ingredient label off a Coca-Cola container and make that my table of contents. Chapter by chapter, I explored the ingredients—water, sweeteners, caffeine, and natural flavors—and exposed how Coca-Cola acquired those raw materials at such low cost, making it possible to sell its products globally for just a few cents per serving for over a century.

Following the ingredients took me on wild treks through dense forests in India and the Andean mountains. Several times I got lost in physical and literary weeds, as provocative chapter twists beckoned me down side-paths that were almost too good to give up. To be honest, it was very late in the writing process when I cut through the underbrush to discover the larger thesis of the work—that golden ticket out of the PhD program.

When I began writing about caffeine, which was then the fourth chapter of my dissertation, I reflected back on the other ingredient stories I had told and noticed a pattern: Coca-Cola did not own things. The company had no ownership stake in the Caribbean plantations that supplied it with sugar or the Peruvian coca farms that provided its secret ingredient, decocainized coca leaf extract (known as Merchandise #5 within the firm). Rather, the company chose not to vertically integrate into these industries, recognizing that it could reduce overhead costs and acquire its raw materials cheaply in the global market. I should note that not all mass-marketing firms followed this strategy in the early 20th century. The Hershey Chocolate Company, for example, did own its own Cuban sugar farms, only to discover later that they were a drain on company finances.

The story of Coke’s distribution network was much the same. For most of its history, Coca-Cola relied on independent bottlers to ship its finished products to consumers, and these independent franchisees paid for the trucks, packaging material, and water—80 percent of what the company sold to the public in the case of its flagship beverage—to make the Coke system work.

In short, what made Coke great was not necessarily what it did, but what it did not do. Coke essentially made money as a middleman between independent suppliers and bottlers. It was a commercial conduit for ecological capital, generating profits from the flow of those natural resources through its corporate system, but never holding on to raw materials for very long. All Coke sold was a concentrated syrup. According to its 1923 annual report, the company relied on over 1,200 bottlers in the 1920s to get its products to market in the United States, but it owned just eight syrup factories in the country at that time.

I call this system for making money Coca-Cola capitalism, not because Coca-Cola was the only business that followed this strategy to big profits, but because it was an early paragon of this outsourcing technique. Throughout the 20th century, numerous businesses, from software firms to fast food corporations, would practice Coca-Cola capitalism in order to generate revenues. In fact, a survey of the most profitable firms of the 21st century suggests that Coca-Cola capitalism is a strategy that has won out in many different industries.

Thus, examining Coca-Cola’s past through the lens of environmental history unexpectedly led me to an interesting story about the structure of mass-marketing firms, which first emerged in Gilded Age America, but identifying Coke’s corporate structure was not the ultimate takeaway of my research. It also showed how Coca-Cola capitalism placed heavy demands on ecologies across the globe, insulating the firm from the environmental costs of perpetual volume sales growth. By not owning its productive infrastructure, Coke was free to diversify its purchasing contracts in ways that pushed suppliers to engage in cutthroat competition that led to exploitation of ecological resources. When a particular supplier was pushed to the ecological or financial brink of collapse, Coke did not have to stick around to clean up the mess, but could simply switch to a new supplier in another part of the world that could provide the company the commodities it needed at low cost. Thus, Coke’s lean corporate structure directly contributed to its heavy environmental footprint, an analysis that could be applied to the activities of many other firms.

When I began writing about caffeine, I noticed a pattern: Coca-Cola did not own things.

In short, what developed from my research was not really a story about Coca-Cola, but a portrait of corporate partners whose interactions revealed a great deal about the collective ecological costs associated with mass marketing in the 20th century.

Following in the footsteps of Alfred Chandler, business historians have long sought to understand how firms managed their productive and distribution networks by focusing on what firms did in-house. I would argue, however, that writing good corporate history requires paying attention not just to what a firm does, but to what it does not do, because it is there—in the spaces where firms rely on partners, not in-house subsidiaries—that broader networks of economic activity can be revealed.

This is an apt time for deploying this approach to historical investigations of multinational firms. Since the 1970s, we have witnessed what economist Richard Langlois has called the “vertical unbundling” of big corporations, as many American businesses have chosen to outsource much of their manufacturing operations.1 On the back end of businesses too there has been a trend toward vertical disintegration, with companies such as AT&T outsourcing customer service responsibilities to third-party partners. In short, studying one business today necessarily requires looking at global networks that extend beyond plants and factories reported on corporate balance sheets. To some extent, this has always been the case, but the leaning of the corporate economy over the past four decades offers numerous potential case studies in the environmental history of capitalist networks of exchange.

Considering this reality, I would add to the call others have made over the past decade and argue that we need more scholarship that looks at the relationship between capitalist corporate development and environmental change. In a recent interchange on the history of capitalism in the Journal of American History (September 2014), the authors engaged in virtually no discussion of ecological factors shaping economic development in the 20th and 21st centuries. I find this a troubling omission. Considering the global reach of multinational firms, scholars working at the nexus of business, economic, and environmental history are in a prime position to tell global stories with broad implications for the sustainability of our planet. What might an environmental history of Wal-Mart look like? Microsoft? General Electric? I am eager to find out.

Bart Elmore is assistant professor of environ­mental history at the University of Alabama and the author of Citizen Coke: The Making of Coca-Cola Capitalism (Norton, 2014).

1. Richard Langlois, “The Vanishing Hand: The Changing Dynamics of Industrial Capitalism,” Industrial and Corporate Change 12, no. 2 (2003): 354.