Early in my career, I waded into the opaque waters of writing history about an incredibly emotional subject. In graduate school I was told to maintain a critical distance from the people I studied, but that was impossible when writing my first book on American Indian children in government boarding schools. My own beloved grandmother had attended an Indian boarding school, and I cried reading her school records and letters. When students in the records died at school, I cheered myself up by archiving stories of runaways and rebels. As a young historian I abandoned the fiction of critical distance, though I still needed to come to terms with the complexities of writing about my own family and community. Now, when my students ask how to balance writing about and working with their own communities in a professional career, my answer is simple: you do it with love.

A few years ago, I encountered in the archives a young American Indian woman who worked in the influenza pandemic of 1918–20. Haunted by a letter she had written in October 1918, I had to follow her story. It is probably an exaggeration to call a 19-year-old with almost no medical training a “nurse,” so perhaps Lutiant, a Minnesotan who toiled at a military hospital just outside of Washington, DC, was more of an aide. Still, with a worker shortage, she was recruited to a nursing position that required her to shoulder heavy responsibilities soon after arriving in the city. 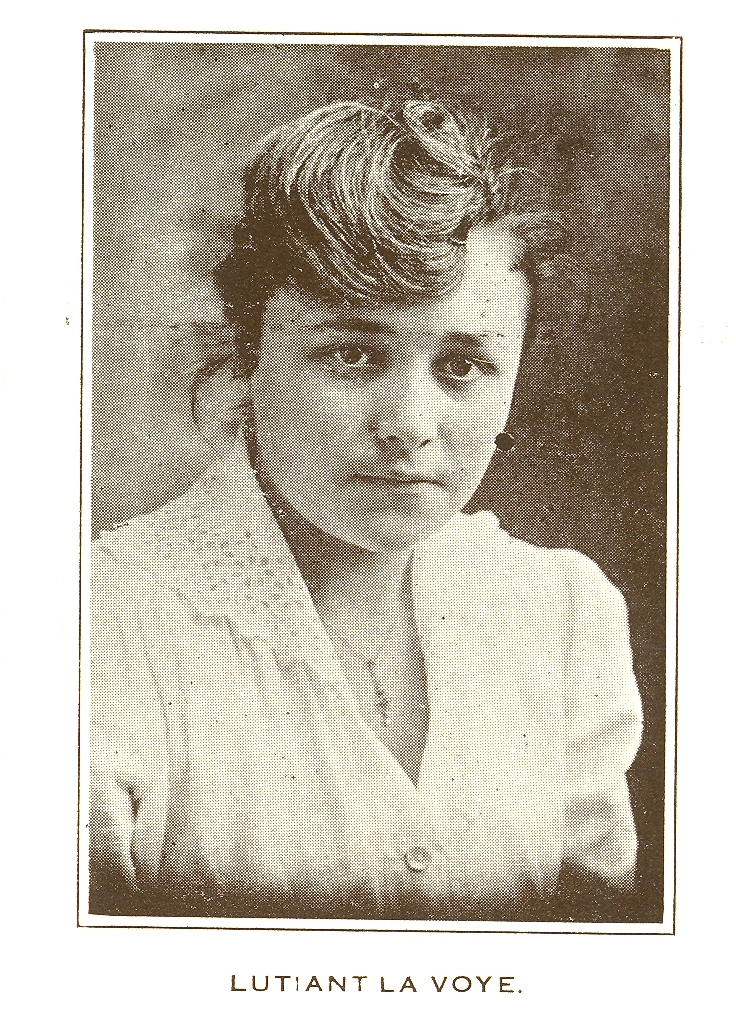 Lutiant LaVoye worked as a nurse in the Washington, DC, area during the 1918 flu pandemic, just a year after this photograph was taken. The Indian Leader (newspaper), Haskell Indian School, 1917

When I first came across her letter, all I knew of Lutiant was her first name and that she was a recent graduate of the Haskell Indian Boarding School in Lawrence, Kansas—a school whose records I had used for my first book. But it was the way Lutiant wrote about her experiences in a thoughtful and often humorous seven-page letter to a school friend that made me care about her so deeply. To me she was funny, in an Ojibwe way. She portrayed wartime Washington as “certainly a beautiful place” and described the influenza’s toll with “so many deaths and sick people in the city.” It was the best social history I had ever read about the pandemic, and that it was written by someone so young was heartbreaking.

Lutiant’s letter showed that she was deeply moved by the young men dying in the hospital to which she was assigned. She described her job at the hospital, where she was part of a group of “Indian girls” who were also boarding school graduates. Of her cohort, she was one of only three who had not yet contracted the influenza. Her work life was exhausting. Nurses were required to work 12-hour days, with duties she listed as “give medicines to the patients, take temperatures, fix ice packs, feed them at ‘eating time,’ rub their back or chest with camphorated sweet oil, make egg-nogs, and a whole string of other thing[s] I can’t begin to name.” She told her friend, “I liked the work just fine, but it was too hard, not being used to it.” The death that surrounded her did not pass unremarked. When four officers she cared for died, she wrote, “The first one that died sure unnerved me—I had to go to the nurses’ quarters and cry it out. The other three were not so bad. Really, Louise, Orderlies carried the dead soldiers out on stretchers at the rate of two every three hours for the first two days [we] were there.”

Lutiant’s letter revealed only a few details about her personal life. She was mischievous and spirited and had a new boyfriend, a young soldier she had met on the train from Kansas City. I shared Lutiant’s letter with a dear friend of mine, an award-winning author. “Wow,” she said, “she is a great writer.” I thought of my own daughter of about the same age, attending college during another global pandemic, who is also spirited and a great writer.

The way Lutiant wrote about her experiences made me care about her so deeply.

I worried that Lutiant herself did not survive the epidemic. This letter was dated October 17, 1918, the period when most of the US deaths from the pandemic occurred. But like so many fascinating documents historians find in archives, the only solid piece of information I had was her signature. Luckily, she had an unusual name. I found her first in the pages of the Haskell newspaper and learned she was Lutiant LaVoye. Now I could search census records. Amazingly, she was the only Lutiant in the 1910 US Census in the entire country. At 10 years old, she lived in Roseau, Minnesota, a town that borders the Red Lake Reservation near the US and Canadian border. As an Ojibwe historian from Red Lake, I felt overjoyed, like I had found a relative.

I learned that Lutiant’s early life was one of turmoil. She was born into a time of dispossession and widespread social disruption on Ojibwe reservations, and this had a tragic effect on her family life. The census recorded her as living with a white stepfather and a younger Native stepmother, as the oldest of four children who were all listed as “Indian.” Lutiant’s Ojibwe mother had died, followed by an infant’s death five months later. This tragedy was probably the impetus behind Lutiant’s wardship with an uncle on the White Earth Reservation, her subsequent schooling at a Catholic girls’ school that accepted Indians, and her eventual placement in two government boarding schools. When Lutiant entered boarding school, school authorities questioned her parentage and whether she met requirements for enrollment in an Indian school or reservation. This was not surprising, considering the status of Ojibwe people who lived outside the boundaries of the Red Lake Reservation, especially those who were of mixed race. US policies worked toward the disappearance of American Indians and their political and cultural sovereignty, and one measure was by taking control of tribal enrollment and citizenship.

In a school essay I found, Lutiant spoke to the complexities of her early life and future aspirations. She wrote that she was “born on our country home” in northern Minnesota in 1899. A turning point in her young life came when she was six years old, when her mother died. For a time, she attended “white public schools” in Minnesota or Canada. She eventually landed at Haskell, a prominent school in the boarding school system, at a time when it was common for Indian children who were orphaned or who had lost a mother to be sent to boarding schools. She was proud to have studied business and be a Haskell graduate. She concluded with a gesture to her mixed Ojibwe ancestry and future, writing, “I speak French and English, but have never learned to speak the Indian language of my tribe or any other tribe. I have always had a great desire of becoming an efficient stenographer, to live on my own resources, and to be independent.”

Did Lutiant get to live the long and happy life I had hoped for her?

After reading Lutiant’s 1918 letter, finding her in the Haskell newspaper, and then locating her Ojibwe family, I requested, anxiously awaited, and finally received her very heavy Haskell student file from the National Archives. Had Lutiant also died? Did she get to live the life she wrote about at Haskell? In that file, one final letter showed she had indeed continued to pursue her education. On September 20, 1923, she wrote: “I wish to enter George Washington University in October, and find that I am short a few credits which I thought possibly could be made up from the subjects I took up at Haskell.”DC city directories in the early 1920s also show several apartment addresses for a Lutiant LaVoye, occupation: stenographer. Lutiant, a young urban Indian in Washington, was pursuing the life she had planned back at Haskell.

I was satisfied knowing that Lutiant survived the epidemic. Still, my worry lingered—did Lutiant get to live the long and happy life I had hoped for her? After my book about Ojibwe labor history was published, which included Lutiant’s story as a volunteer nurse, an email arrived in my inbox from a reader. Fascinated by Lutiant’s story, he tried to find records about her beyond 1923. Sadly, there was a death certificate—Lutiant died of pneumonia in 1925.

Lutiant is one of the boarding school students I have written about in my work as a historian. Too many of them died young. They are my ancestors, my relatives, and I relate to them as an Ojibwe woman, a mother, and a scholar—always with love. I admire their fortitude and resistance. Their letters, voices, and small stories are a gift, allowing me to imagine American Indian history on a larger scale. To me, Lutiant will always be a survivor—of dispossession and poverty, boarding school, and the first global pandemic in modern history.