Each year, as we approach Native American Heritage Month in November, the flood of email inquiries begins: How do I do a land acknowledgment? Do you know which Native people lived here? We’d like to post/tweet/read a land acknowledgment at our event; can you please provide us with the language? These are seemingly straightforward questions, but treating the practice of land acknowledgment seriously requires more than just getting the names, phrasing, and pronunciation right; rarely are there simple answers. 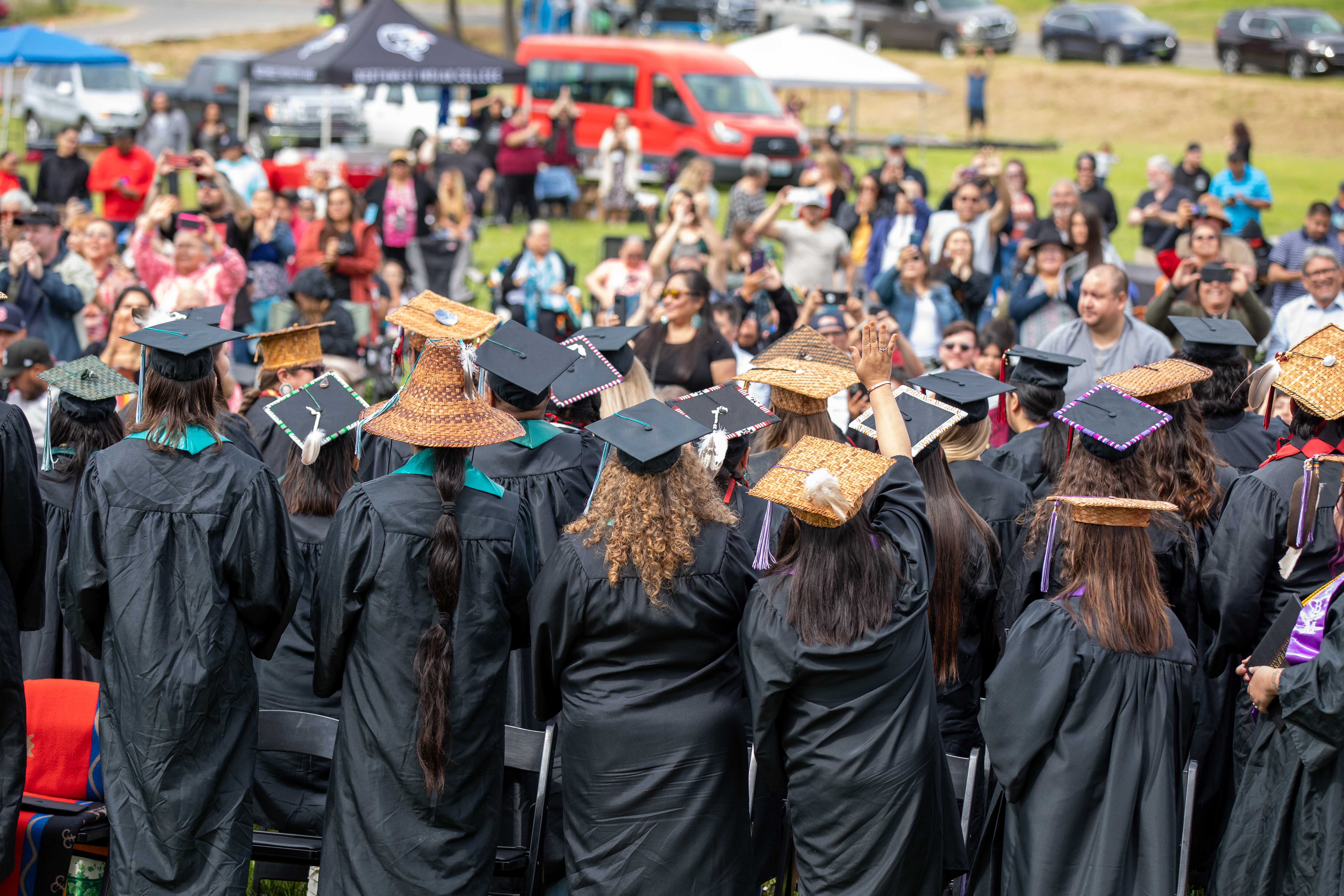 Land acknowledgments can be part of an academic culture that facilitates the academic success of Native students. Courtesy Northwest Indian College

As the practice of writing, speaking, and displaying land acknowledgments in institutional settings becomes more common, we embrace this opportunity to reevaluate their use, purpose, and limitations, particularly among historians and our professional organizations. This is especially true as many Indigenous communities and scholars have become more critical of the use and performance of these statements by colleges and universities that lack ongoing relationships with and commitments to Native nations in their region or scholars, students, and staff on their campuses. What is the utility of these statements? How and when can they be helpful components of anticolonial pedagogical practice? And what are the pitfalls or outright harms that can be done by them?

For many scholars of settler descent, land acknowledgments are something new, and they experience them as nonintrusive, brief components of events and conferences. This is insufficient. The academy has long appropriated knowledge and practice from Indigenous communities, and it is important to understand the cultural and historical origins of these rituals in Indigenous societies around the globe. In customs common across North America, Native people have engaged in oratorical practices providing listeners with genealogies of relationships interconnecting humans, other-than-human beings, and homelands since long before settlers arrived. These addresses became routine components of international diplomacy around warfare, trade, and land cessions. It is worth emphasizing that these narratives framed possibilities for interrelationship and solutions for current crises in stories about shared experiences, mutual obligations, and common interests. Land acknowledgments have traditionally emphasized practice and process.

More recently, the Truth and Reconciliation Commission and Indian Residential Schools Settlement Agreement in Canada prompted the widespread formalization and use of land acknowledgments by academic institutions engaged in the complicated work of recognition, reflection, and atonement. As flawed and contested as the process has been (and is), the United States has engaged in nothing comparable. This difference is important, and many academic institutions here have created statements without understanding historical context, Indigenous cultural protocols, or the current political and economic experiences of the peoples to whom they refer. Likewise, many individual scholars and students in institutions lacking formal acknowledgments have crafted their own by appropriating language used elsewhere and created with other Native peoples.

Many academic institutions have created statements without understanding historical context, Indigenous cultural protocols, or the current experiences of the peoples to whom they refer.

As a result, most land acknowledgments no longer resemble the ritual, relational tellings of their origin, and many are deeply problematic. We encounter them as lines in an email signature presented with as much ceremony as office hours. We’ve heard generic apologies to all Native peoples for unspecified past wrongs that ring with insincerity. We’ve listened to painful incantations of mispronounced names. We’ve cringed at the past tenses working to banish Native peoples to being long disappeared. We’ve seen Native scholars already overwhelmed by service labor tasked with writing them and Native community members trotted up to microphones to recite them and promptly applauded off the stage and out of our academic spaces. Done poorly, the (mis)performance of land acknowledgment can cause more harm than good. For whom are we saying these words, for what reasons, and with what intended outcome? Rightly so, some of our fellow scholars and many Indigenous people point to some land acknowledgments that are wholly disconnected from the Native communities they reference as the antithesis of white, liberal social justice performativity.

Despite these criticisms and potential shortcomings, land acknowledgments when done well can be powerful opportunities for Indigenous visibility and historical education. Both Liz and Rose teach in parts of the eastern United States where Native American history is not routinely taught in public schools or where Indigenous peoples are covered only as part of America’s colonial past. In New Jersey, where Liz works, there are almost no public representations of contemporary Native people, short of cigar store wooden Indians and vague references to Native participants in the Revolutionary War. In the Carolinas, where Rose teaches, most non-Native people believe the Trail of Tears resulted in the removal of all Native people from the region—this despite the presence of federally and state-recognized nations and urban Indian communities in these states.

This erasure of Native pasts and presents means that many of our Indigenous students feel invisible and marginalized in their history classes and on our campuses. Land acknowledgments therefore provide moments to begin conversations about Native histories and the presence of contemporary Indigenous communities and to recognize the continued importance of Native people today. As our students routinely remind us, even these small acts can be deeply meaningful, and they can make these students feel more represented within educational spaces. In this way, when crafted specifically to promote the well-being of Native people who are part of our scholarly communities, land acknowledgments draw from the tradition of relationship nurturing and future building.

Moreover, as historians, we can treat a land acknowledgment as a tool of historical analysis and an opportunity to educate against Indigenous erasure. We can use this practice to teach about the historic and contemporary Indigenous communities on whose land we work, live, and educate. If you are unsure of whose land you’re on, the website Native-Land.ca is an excellent (if incomplete) resource and a good place to start. Combining it with this directory maintained by the National Congress of American Indians, we can, with a few clicks, learn about the past and present of the region in which we teach.

Because Indigenous dispossession and forced removals were messy and incomplete processes, and because many Native nations shared territory or had overlapping land claims in many parts of the United States, there are multiple Native nations who belong to these lands—yes, we often say we belong to the land instead of it belonging to us—and who hold enduring relationships and territorial claims to place. For example, the people of Liz’s nation, the Peoria Tribe of Indians of Oklahoma, were forced out of their homelands (some of which overlapped with Potawatomi, Miami, Sauk, and Meskwaki territories) in what is now Illinois, and placed on reservations in Oklahoma on lands that belonged to the Osage Nation. Of course, not all Native American histories are stories of removal, and so sharing land acknowledgments in areas like Davidson, North Carolina, where Rose teaches, also provides opportunities to educate students about Catawbas, Eastern Band Cherokees, Lumbees, and the other Native communities who evaded removal and remain in ancestral homelands. Land acknowledgments that accurately tell pieces of these stories and prompt listeners to further investigate the experiences of peoples whose territories they occupy are therefore powerful opportunities for historical inquiry.

When we advise our colleagues and scholarly communities on this topic, we begin with a definition that clarifies the purpose of this practice: land acknowledgments must be commitments to contemporary Native peoples and to sharing Indigenous histories rather than a rote collection of words. Done correctly, land acknowledgments convey specific obligations to support the well-being of the Native people in relationship with our academic institutions, on and beyond our campuses, now and in the future. For these reasons, best practices include using the specific, accurate names those Native nations use for themselves today; admitting past and current harms caused by the institution; and making specific commitments toward redress and relationship building and to sharing resources and decision-making authority.

Land acknowledgments must be commitments to contemporary Native peoples and to sharing Indigenous histories rather than a rote collection of words.

Beyond long-term institutional commitments, many scholars also use land acknowledgments at onetime events to signal respect and to highlight Indigenous histories and perspectives. In such cases, land acknowledgments serve to remind participants that they are on Native land, tell small pieces of Indigenous history, and bring attention to the contemporary descendants of these nations. However, when land acknowledgments are delivered as rote statements at the beginning of an event, and when there is no further discussion of these Indigenous pasts and presents, the acknowledgments tend to feel inauthentic and performative. This practice also sidelines conversations about Native history to the role of interesting headnotes or minor asides, and it fails to generate serious engagement with Native pasts or the primary analytical message or social purpose of the event. By contrast, building information about Indigenous history and contemporary Native communities into the presentation itself conveys the same information in ways that integrate Native experiences into the intellectual work of the event itself. This brings us back to the rightful purpose of these statements: to tell stories that connect people so that we can work collaboratively, address historic and ongoing harm, and forge relationships among Native nations and institutions.

So rather than asking your Native colleague what to say in a land acknowledgment, better questions are: What do your actions do to support Native people on and beyond campus? What specifically can our institutions do to foster reciprocal, nurturing relations with the local Native people and the Native nations whose land we live and work on? And how, then, can you voice and acknowledge these commitments in your statement? If we have nothing to say, then we should focus on the work before the words.