This past summer, a semi-anonymous document emerged from old papers when Allison Miller, editor of Perspectives on History, was looking through some archival files in the AHA office. I call it “semi-anonymous” because, although the two pages were unsigned and undated, they were produced by an electric typewriter on stationery from the Cornell University history department. Allison quickly concluded from the content that I had written it. She emailed me about her find, attaching a scan, and I readily agreed that I must have been the author, although I did not recall having written it.

More sleuthing by Allison turned up the fact that the two pages were part of my response to a questionnaire distributed by the AHA’s Committee on Women Historians (since renamed the Committee on Gender Equity) to 250 women historians in late 1983. The committee’s annual report by its then-chair, Linda Levy Peck, appeared in Perspectives in September 1985. It discussed some of the results of the survey, which also was the topic of a session at the December 1984 annual meeting of the Association. As Peck’s report explained, the survey had a dual aim: to examine the patterns of female historians’ employment and to inquire about the status of women’s history as a field of study. Her report actually quoted a sentence from my two pages, thus confirming the document’s origins. 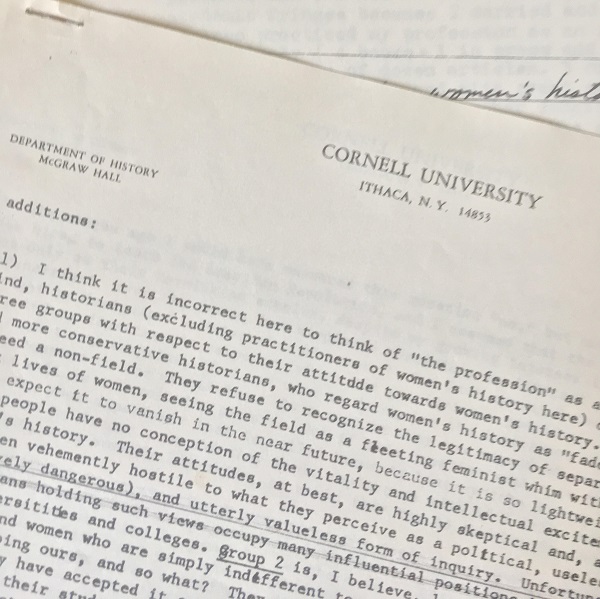 From the AHA archives: Mary Beth Norton’s response to the 1983 CWH survey.

As with many other historical documents we deal with regularly, though, this one is incomplete. The AHA’s files do not contain all my responses to the questionnaire. The two surviving pages are headed “additions” and include the numbers 31, 32, and 35, along with a brief section entitled “further comments.” These were my answers to the survey’s open-ended questions, which prompted respondents to provide more details. Question 35 inquired about the attitudes of members of one’s department to women’s history. Question 32 asked whether a department had a position designated for “women’s history,” and, if so, what sort of position.

The document from the AHA files was sufficiently intriguing for me to decide to focus a column on it. I’ll summarize and examine my answers, offering some current observations on the same topics.

In 1983, I indicated that it was not clear to me whether the department regarded me as a “historian of women.”

To begin with those questions about my department, I answered the survey by explaining that I had been hired as a specialist in the American Revolution. Although I did not say this in my response, I developed an interest in doing women’s history only after I arrived at Cornell, in part because of my involvement in establishing our Women’s Studies Program (now Feminist, Gender, and Sexuality Studies). Therefore, I indicated that it was not clear to me whether the department regarded me as a “historian of women,” but it did appear that my colleagues “had come to recognize the importance of my women’s history courses to the curriculum.” Nevertheless, there was no position in the Cornell history department formally designated for a historian of women or gender—just as there is none today—although I have colleagues who research and teach about the subject in the context of different chronological and geographical fields. In my response to the survey, I raised an issue my colleagues will soon have to confront, with my impending retirement at the end of this semester: if I left, I asked, would they replace me with “an early Americanist, or a women’s historian, or would they try to combine the two?” (I now think that the response is the last, but that is not up to me.)

Question 31 was more general, asking about the attitude of “the profession” toward women’s history and women historians. I challenged the wording of the question, writing, “it is incorrect here to think of ‘the profession’ as a unified whole.” I then divided historians into three groups, excluding from consideration those who studied women. First were the influential “older and more conservative” people (I didn’t identify them exclusively as men, but I probably meant that), who saw women’s history as “faddish, and trendy and indeed a non-field.” Such historians, I asserted, viewed the field as “a fleeting feminist whim without staying power,” expecting it to soon vanish. “Their attitudes, at best, are highly skeptical and, at worst, are openly and even vehemently hostile.” The second group, I argued, was larger, composed of both men and women who were “simply indifferent” to women’s history. They accepted it as “a legitimate subfield,” although they might not encourage their students to familiarize themselves with its scholarship. The third group comprised “mostly younger” historians who had started to pay attention to the findings of women’s historians. They had begun to develop a few lectures on women’s history or to assign one or two works on the subject, but “they have not yet fully assimilated women’s history scholarship or recognized its significance.” Similar groupings, I concluded, characterized attitudes toward practitioners of women’s history: some saw them as “feminist fanatics”; some were “indifferent”; and some were “most likely” to respect women’s historians but were themselves mainly untenured, with little clout in the profession.

Women’s history has not had the impact on overall scholarship that I and its other early practitioners once anticipated, or at least wished for.

So: what has changed in the more than three decades since I wrote those words? That first group, I would contend, has largely vanished, and good riddance. The second and third groups still exist, and they are probably larger than women’s (and gender) historians would prefer them to be. Women’s/gender history is now firmly established as a significant field of historical inquiry, and it has attained successes undreamed of in the mid-1980s, having produced influential publications and many highly regarded award-winning books. Studies once confined to the category of “women” have expanded to include masculinities and sexualities of all descriptions, and have also moved far beyond their initial focus on privileged white women or occasionally the enslaved to include many studies of women of color at different times and places.

Yet the field has not had the impact on overall historical scholarship that I and its other early practitioners once anticipated, or at least wished for. Books and articles continue to be published without including gendered analyses, even when the material would seem to demand it. Many historians today, including those who must have been trained by the “younger” group of whom I wrote with optimism more than three decades ago, still write of “people” in the past as though only men mattered. In 1983, I lamented that too many historians had “no notion of how women’s history is reconceptualizing and recasting questions that should affect the way they write history in their own political, economic, social, or whatever subfield.” Even many nominally sympathetic scholars, I wrote then, “isolate the insights of women’s history, placing them in a separate category that does not affect the core of their work.”

Alas, despite all the recent advances, I still think that is true. And—spoiler alert!—I intend to discuss this issue in my presidential address in January, at the 2019 annual meeting in Chicago.