By Degrees: A Big Year for History

History departments conferred an almost unprecedented number of undergraduate degrees in 2005–06. The U.S. Department of Education reports that American colleges and universities conferred 33,153 new baccalaureate degrees—a 5.6 percent increase from the year before. This marked the largest number of degrees conferred in the discipline, with the exception of a few years at the peak of the baby boom (Figure 1). 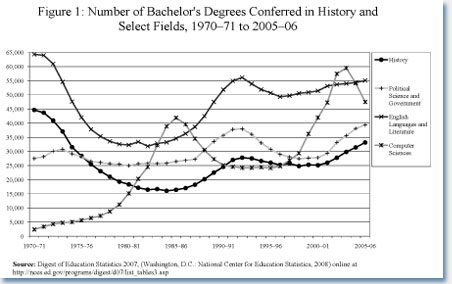 While history has been gaining ground relative to other fields, the “market share” for history remains historically low, at just 2.23 percent of all degrees conferred (Figure 2). 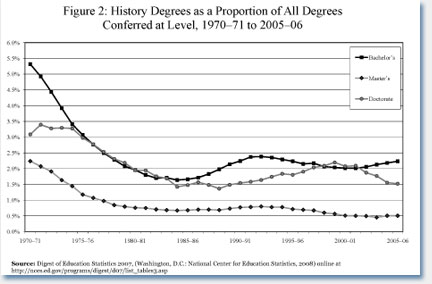 This is equal to the discipline’s representation a decade earlier, and well below the proportion of students earning history degrees before 1971, when history began to lose ground to professional and technical fields.

Some demographic indicators of students earning degrees in history remain largely unchanged. As we noted in the September 2008 issue of Perspectives on History, the representation of women and minority history students has been relatively stable over the past decade, though well below the averages in other disciplines.

Between the 2004 and 2005 academic years, the proportion of women earning baccalaureate degrees in history fell slightly, from 40.2 to 39.5 percent. At the doctoral level, the representation of women also fell, from 40.9 percent to 40.8 percent.

Looking back over the past decade, the one area marked by noticeable change is in the representation of minority students at the undergraduate and doctoral level. Using the Department of Education’s figures, the proportion of minority students at the undergraduate level is up almost 25 percent over the past decade, while the proportion at the doctoral level has increased by just over 52 percent (from under 14 percent).

The effect of the recent increases in the number of undergraduate degrees (and by implication, the higher enrollment rates) on the history job market tends to be underappreciated. The focus of our attention in the history job market tends to be on the relative balance between jobs and PhDs, and the growing proportion of part-time faculty. This tends to obscure the fact that the number of full-time and tenure track historians at four-year colleges and universities is significantly higher than it was 15 years ago.1

The Department of Education estimated that there were 12,400 full-time faculty at 4-year institutions in 1993; that number had grown to 15,300 by 2003. This tracks closely with the growth in the number of undergraduate history majors over that span.

However, when the numbers are separated between public and private institutions, a revealing contrast emerges. Over the past decade, the number of history degrees conferred by public colleges and universities increased by 28.4 percent—almost double the growth at private institutions which increased just 14.4 percent—and one might have expected this increase to lead to a concomitant growth in faculty numbers. But in reality, history faculty growth lagged behind student growth at public institutions, while surpassing it at private colleges. The U.S. Department of Education estimates that between 1993 and 2003 the number of full-time faculty teaching history at public institutions increased by 24.0 percent, while increasing by 21.4 percent at private colleges and universities. The greater disparity between the growth in the number of history students and faculty members at public institutions (in contrast to the narrower gap between the respective increases at private institutions) may partially explain why faculty at state colleges and universities talk of increasingly burdensome class sizes and teaching loads.

So the rising student population can be something of a mixed blessing for the discipline, but peering into the future, it seems quite likely that the number of students will continue to grow. The Department of Education projects continued growth for enrollments in American colleges and universities. Their latest projections estimate a 16 percent increase in the number of students earning bachelor’s degrees through 2017.2

Whether this will continue to translate into history jobs is something of a mystery. As faculty at the state schools know, institutions can respond to further enrollment increases by increasing class loads or adding to the number of part-time and adjunct faculty. And as the trends in history student enrollment in the 1970s suggest, there is no guarantee that students will major in history. But this does suggest that the circumstances for further job growth are there, if the profession continues to succeed in attracting majors and pressing for full-time faculty in the classroom.

1. National Survey of Postsecondary Faculty. Data from the 1992–93 Faculty Survey, 1993 compared to findings from the 2003–04 Faculty Survey, tabulated using the DAS system at http://nces.ed.gov/dasolv2/tables. The data here is only for faculty at four-year colleges and universities.