National Museum of the American Indian Opens in Washington, D.C. 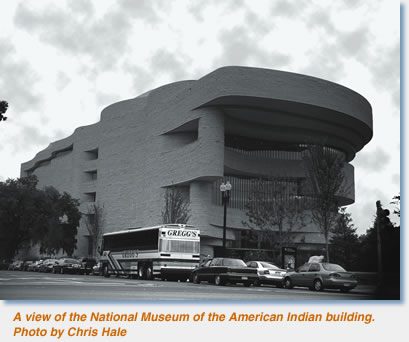 On September 21, 2004, the National Museum of the American Indian, the 18th Smithsonian museum, opened to the public. The museum is sustained by both government and private funds. 92,300 people visited the museum in its first week. Native Americans traveled from throughout the Americas for the opening ceremonies, which featured a procession on the National Mall by 25,000 representatives of 500 different tribes and a week-long festival of music, dance, and storytelling.

The museum strives to incorporate a Native viewpoint in everything it does, from the design of the building to the exhibitions and public programs. Its mission is to "recognize and affirm… the historical and contemporary culture and cultural achievements of the Natives of the Western Hemisphere by advancing—in consultation, collaboration, and cooperation with Natives—knowledge and understanding of Native cultures, including art, history, and language." The museum features three permanent exhibits: Our Universes: Traditional Knowledge Shapes Our World, Our Lives: Contemporary Life and Identities, and Our Peoples: Giving Voice to Our Histories. Rather than attempting to tell the whole story of contact between American Indians and European settlers, the museum focuses on the role of guns, religion, treaties, and schools in conflict and influence across cultural boundaries.

Reviewers for the New York Times, Washington Post, and Slate.com disliked the museum's approach, charging that it lacks a "unified intelligence" and, in the words of Washington Post columnist Mark Fisher, adopts the "trendy faux-selflessness of today's historians" to "let the Indians present themselves as they wish to be seen." Slate essayist Timothy Noah lamented that the museum fails to "grab you by the lapel and say, Here is something you must see, and here is why it is important." Curators should regard the criticism as a compliment, for they set out to avoid the authoritative tone of traditional museum exhibits and let Native Americans tell their own story. 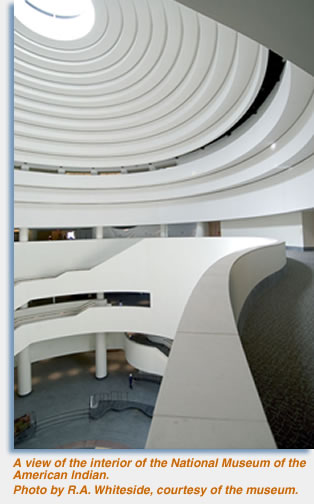 Scholars and Native people have long criticized exhibits in natural history and history museums for relegating Native Americans to the past, as if they ceased to exist in the 19th century. Critics also decry exhibits that depict Native culture as a "primitive" contrast to modern European civilization, demean sacred objects by treating them as relics or curiosities, or ignore the Native artists who produced the items on display. To avoid such pitfalls, museum staff worked with "community curators" who chose themes for the exhibits and selected objects to display. Other Native consultants gave advice on respectful treatment of sacred objects. Artifacts in the collection, including some considered too scared to be displayed, will be available for ritual use at a Cultural Resources Center located in Suitland, Maryland. The Windows on the Collection exhibits identify only the date, provenance and, if known, the name of the artist for items on display, treating them as works of art rather than anthropological specimens. Even the cafeteria invites visitors to adopt a Native perspective, serving indigenous foods in dishes based on the culinary traditions of different tribes.

Given that many Americans see history as a tale of progress and national unity, the curators are wise to avoid extensive use of labels. The West as America, a 1991 exhibit at the National Museum of American Art, attempted to incorporate a complex view of the history of the frontier in lengthy and, to some, didactic labels. Conservatives perceived the exhibit as a "politically correct" attack on American heroism. At the National Museum of American History, the author of every label is identified, informing visitors that they are reading the interpretation of an individual curator or community member and letting them draw their own conclusions about the validity of that viewpoint.

The museum makes a strong case for the merits of historical revisionism. At the beginning of the Our Peoples exhibit, a display of familiar portraits of Native Americans by George Catlin surrounds video monitors on which a narrator warns that the exhibit may not reflect what visitors learned in school. "Like all other makers of history," warns the narrator, the exhibit "has a point of view, an agenda…view what is offered with respect, but also with skepticism. Explore the gallery. Encounter it. Reflect on it. Argue with it." By refusing to tell visitors what to think, the curators ask them to think like historians— to question the viewpoint behind objects and documents, interpret them in the context of their existing knowledge, weigh the evidence, and form their own idea of what happened in the past, and its impact on the present.
For more information about the museum, including how to obtain timed tickets for admission, visit www.nmai. si.edu.

—Debbie Ann Doyle staffs the AHA Task Force on Public History. She visited the museum with her father, who has long been interested in Native American history (he loved the museum), on Friday, September 24.