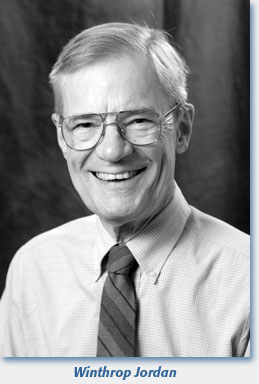 Winthrop D. Jordan died in his home in Oxford, Mississippi, on February 23, 2007, of amyotrophic lateral sclerosis, or Lou Gehrig's disease. His White Over Black, which won both the National Book Award for history and biography and the Bancroft Prize, literally changed the way that historians have approached and understood the history of slavery and race in America. He won a second Bancroft Prize for Tumult and Silence at Second Creek: An Inquiry into a Civil War Slave Conspiracy.

Winthrop Jordan was born on November 11, 1931, in Worcester, Massachusetts, the son of Henry Donaldson Jordan, professor of history at Clark University, and Lucretia Mott Churchill, a direct descendent of abolitionist and feminist Lucretia Mott. When he entered Harvard University in 1950, he was determined to emulate his grandfather who was, as Jordan put it, a "real doctor." Less than stellar grades in chemistry made him rethink that goal. But he did not turn immediately to the study of history. Indeed, he did not take a single history course as an undergraduate. He majored in "social relations," where, fortuitously, he first encountered scholars who studied race in something approaching a systematic fashion. After graduating from Harvard in 1953, he floundered a bit, becoming a "management trainee" at the Prudential Life Insurance Company. Finding nothing about this job especially appealing—except for the subway rides to and from work, which allowed him much time to read and think—he accepted a job as an instructor of history at Phillips Exeter Academy. He earned a master's degree in colonial American history from Clark University in 1957 and a PhD in history from Brown University in 1960. He was a fellow at the Institute for Early American History and Culture, in Williamsburg, Virginia, before joining the faculty of the University of California at Berkeley in 1963. Jordan remained at Berkeley for nearly 20 years, surviving the days of the turbulent Free Speech Movement, and serving as an associate dean for minority group affairs in the graduate school. In that capacity, he bailed students out of jail, tried to mediate the differences dividing administration from students, and became a friend and supporter of countless students who would have simply given up had he not intervened.

Win Jordan left Berkeley in 1982, joining the University of Mississippi faculty. There, he was an F.A.P. Barnard Distinguished Professor and Professor of Afro American Studies. In 1993, he became the first holder of the William F. Winter Professorship in History. He retired from the university in 2003. He received word that he had been awarded the B.C.C. Wailes Award from the Mississippi Historical Society just a few weeks prior to his death.

It is impossible to sum up Win Jordan's contributions to the profession of history. His magisterial White Over Black alone made him an internationally known scholar. Elegantly written, breathtaking in its scope, it became—and remains—the starting place for anyone who wanted to examine the meaning and origins of race in America. Written at a time when "women's history" was scarcely a dream and gender studies had not even appeared on the horizon, his analysis of the connection between race and sexuality in America was truly remarkable. He did not, of course, know about DNA, but his insistence—after a meticulous examination of the facts—that it was at least possible, even probable, that Thomas Jefferson was the father of some of Sally Hemings's children, made him rather singular in the 1960s, even though it puts him in the mainstream today.

For his students, Jordan was not just a scholar and a teacher, but—as one student put it—"a north star" whose impact on every one of them remains deep and personal. The fact that so many of his students traveled to Oxford from all parts of the United States in order to attend his memorial service speaks volumes. They have also established a scholarship fund in his name, to help graduate students at the University of Mississippi with their research expenses. Jordan attracted a diverse and talented group of graduate students, who have published on topics ranging from the 17th to the 20th century, from Puritan New England to jazz musicians. Jordan never asked his students to be mere clones of himself. He urged them to find their own voice, their own passions, and to do what they loved to do as well as they possibly could.

When students first encountered a "Jordan seminar" they were often bewildered. He listened more than he talked, puffing quietly on his corn cob pipe, asking a question here and there, gently probing, prodding, pushing in what seemed to many to be a highly idiosyncratic way. All his students remarked on his wry humor and his laser-sharp intellect. Each class was different; each took on a life and character of its own. Students whispered anxiously among themselves, wondering what he "wanted" and what they were supposed to do. They soon found out.

He wanted correct grammar and word usage in their papers. If he did not get what he expected on the first draft, he demanded a second or even a third. He relegated "theory" and historiographical debates to the back seat and focused on a rigorous attention to the sources. He taught his students to listen to the voices of the past, to be open to any possibility, to avoid coming to conclusions too early, and to forget about their own personal or political agendas as they discovered—again and again—that common wisdom might be common, but it was not invariably right.

Win was a very special colleague. As a Quaker, he was not one to stand on ceremony, and was averse to anything approaching ostentation. Thus he arrived for lunch every day carrying a little brown paper sack from Ace Hardware Store. He used the same sack every day until it was literally worn out, which would lead him back to Ace to buy another screw or bolt, and thus to get another "free" sack. While some academic stars tend to avoid the scut work that makes any university tick, Win was happy to do his part. He was especially proud of his chairmanship of the University of Mississippi Faculty Traffic Ticket Appeals committee, an assignment that most people avoided assiduously, but which he saw as the price of admission to academia. He came to every department meeting and spoke rarely, but he always had something to say when he did. A "friend" as well as a Friend, he often greeted colleagues with small gifts or notes that marked no special occasion. He loved playing practical jokes on his colleagues, the more intricate and outlandish, the better. And despite his New England reserve and his obvious erudition, he loved what some might call "fourth-grade humor," especially puns.
Jordan was married twice. His first marriage, to Phyllis Henry, ended in divorce. He married Cora Miner Reilly, a native Mississippian, in 1982. He is survived by Cora, his brother Edwin, three sons from his first marriage, and three stepchildren. As a scholar, teacher, and human being, he can never be replaced.