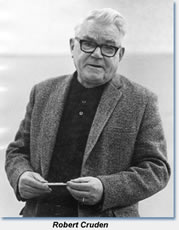 Robert Cruden, professor emeritus of history at Lewis and Clark College, died August 7, 2004, at age 94 in Forest Grove, Oregon. Blessed with long, rich, and productive years, Bob Cruden arrived later in life than most to an academic career, a career shaped by his earlier experiences.

Born in Fraserburgh, Scotland, in 1910, Bob Cruden emigrated to the U.S. with his family in 1924, settling in Detroit. Shortly thereafter, he enrolled in the College of the City of Detroit, now Wayne State University. As a student, he launched in 1928 what would become his first career in labor journalism and organization, writing articles for The Nation, Labor Age, and numerous other labor periodicals. The Depression interrupted his formal schooling and, like countless others at the time, he left college to seek work where he could find it. His various jobs included assembly-line production with Packard, Ford, and other manufacturers. All the while, Cruden continued to write about working-class issues, both for the press and in fiction, publishing a novel, The Conveyor, under the pseudonym James Steele in 1935. He was later included in several scholarly discussions of young "American proletarian writers" of the 1930s. A series of positions with the Locomotive Engineers and the United Rubber Workers (URW) led to his becoming the publicity director of the latter in 1937, a post he retained until World War II.

During the war, Bob Cruden served with a tank battalion in the Pacific theater. Afterward, he returned to the URW, but left it in 1948 to resume his studies under the G.I. Bill. He graduated from Hiram College in 1951 with an AB degree in history and immediately began graduate work at Western Reserve University, where in 1959 he completed his PhD. There he studied the Civil War and American historiography with Harvey Wish, and combined both interests in a dissertation on the historian James Ford Rhodes, which he subsequently published in 1961 as James Ford Rhodes: The Man, the Historian, and His Work. After a stint with Baldwin-Wallace College in Ohio, he arrived at Lewis and Clark in 1963, where he taught until his retirement in 1978. Although nearly 50 at the start of his academic career, Bob Cruden was enormously productive. His courses in black and women's history, as well as Civil War and historiography, helped open new belvederes on American social history in the 1960s and 1970s. And he buttressed his demanding classroom work with his own cutting-edge scholarship, publishing The Negro in Reconstruction (1969) and The War that Never Ended (1973).

Bob Cruden always said that to learn the history one must study the historian (a view captured by the title of his book on Rhodes). His own writings bear witness to sensibilities and perspectives gained through participating in the events of immigration, the Depression and unemployment, "Modern Times" industrial production, labor's struggles to organize, and ethnic and racial integration in the land of the free. These perspectives culminated in his last book, Many and One: A Social History of the United States, which appeared in 1980, and which serves brilliantly as his life's testimony. His is a Woody Guthrie vision of America, with no cheap sentimentality visited on the "victims" in America's story, those groups—from Native Americans, to blacks, to women, to ethnic immigrants—chronically exploited and marginalized by the political, economic, and social power of the ruling elites. Rather, he brings empathy and compassion to showing various people's capacities to adapt and struggle within circumstances not of their choosing, and in so doing to display their courage, talents, and commitments to a better life. No illusions about who runs the show here; no myths about the melting pot; no romance about life without the "Do Re Mi"; no mysteries about the "One"—and yet a deep and abiding recognition of humanity in the "Many."

Tough and terse when confronting flummery in all its guises, Bob Cruden always exuded a profound, humane, and caring optimism. He was a student's teacher, a historian's scholar, a friend's friend. We shall miss his wisdom, wit, and infectious laugh. He is survived by Janet, his partner and wife of 74 years, a son and daughter, four granddaughters, and two great-grandchildren.