There are stories in the very fabric of Philadelphia’s Lazaretto. They speak to us from the bricks and mortar of the main building. They murmur in the tidal flow of the Delaware River next to which it stands. They whistle in the southerly breezes that fan the site just as they did when it was built in 1799, after four yellow fever epidemics in seven years had devastated what was then the nation’s capital. For a century, the Lazaretto guarded the maritime gateway to the city against the entry of infectious disease and treated sick immigrants on their way to new lives on a new continent. 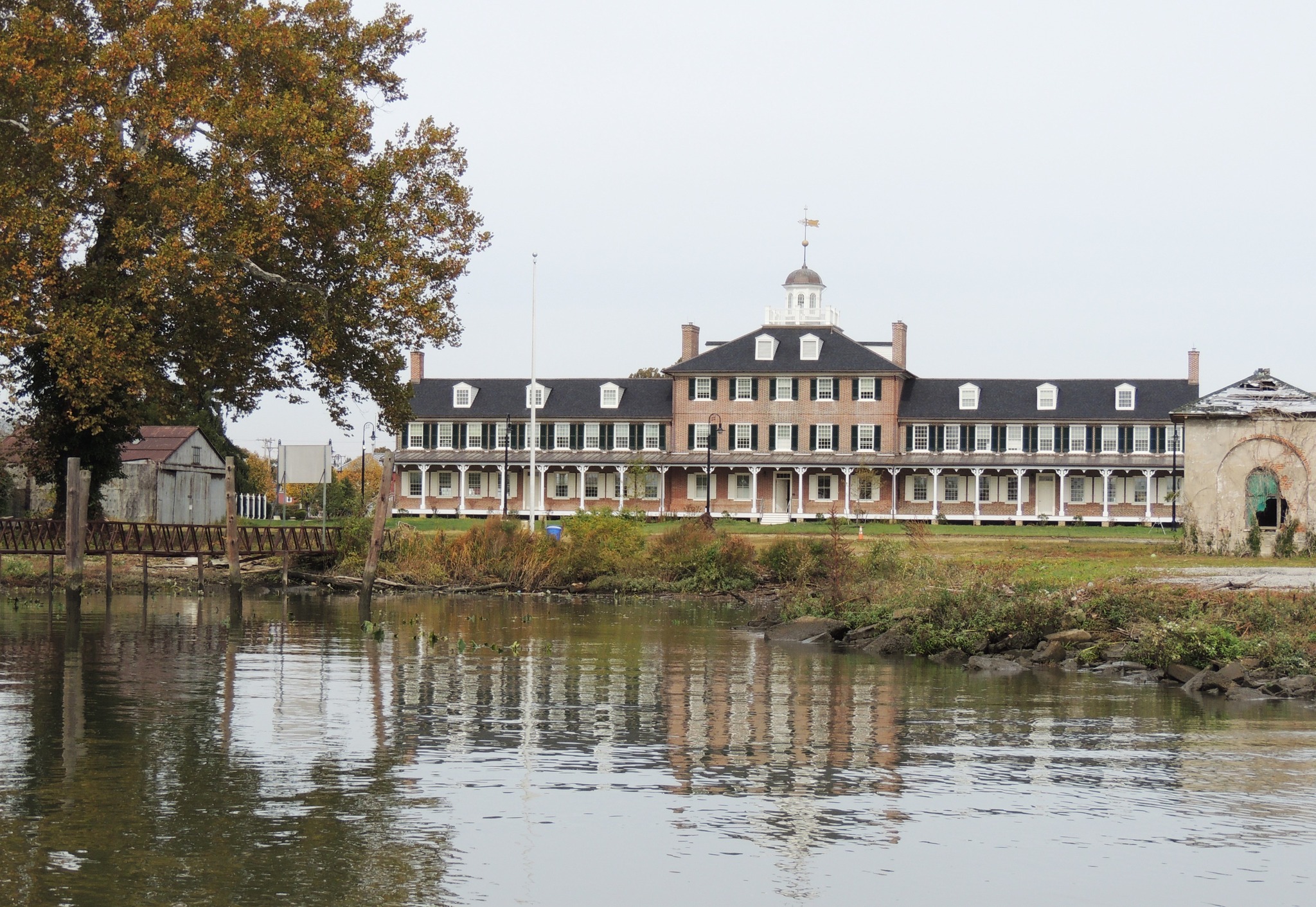 Quarantine stations—often called “lazarettos” from the Italian diminutive form of Lazarus, the patron saint of lepers—protected port cities from the early 15th century well into the 20th century. Arriving ships anchored for inspection and could be detained if there were reports of a disease outbreak at the port of origin, if passengers were sick, or if certain kinds of cargo were rotting. Detention could last from just a few days to two months or more, and often included strict isolation and disinfection of vessel and cargo. Most quarantine stations fell into disuse in the 20th century and have left no physical traces. Just a few, like Philadelphia’s, were adapted to other uses and have survived more or less intact.

Arriving sailors and passengers were greeted by two pillbox-like gatehouse structures at the river’s edge, symmetrically flanking the Lazaretto pier. Set back from the river along the eastern and western edges of the property, identical and symmetrical relative to the pier, were modestly handsome brick houses for the quarantine master and Lazaretto physician. Grandly occupying center stage, stately but not ostentatious, was the Federal-style main building of elegant flemish-bond masonry, consisting of two hospital wings and a central pavilion with meeting rooms, kitchen, and staff quarters. A colonnaded portico shaded the 180-foot front of the building, and a weather vane–topped cupola completed the structure. Its designers boasted that the station combined “expedition, utility, economy, and beauty.”

Some Philadelphia quarantine stories are tragically ordinary, like those of the Irish famine migrants who escaped starvation only to die of “ship fever” (typhus) on the way to Philadelphia. Others are less familiar but no less poignant: 137 people enslaved at Bunce Island in West Africa and freed in Philadelphia in 1800 after a US naval vessel intercepted two slave ships off the coast of Cuba. A mischievous 11-year-old orphan who survived a bout of yellow fever only to find himself blamed for starting an epidemic in Philadelphia. A yellow fever outbreak at the Lazaretto itself, when a 50-year-old widow went there to nurse a sick friend, then stayed after her friend’s death to restore order at the station when most of the staff had either died or fled in panic.

The immigrant ships that arrived at the Lazaretto having lost nearly half their human cargo to typhus beckon us to dig deeper, to uncover the transatlantic commercial system of human trafficking that victimized vulnerable migrants, created shipboard typhus factories, and dumped the survivors on American shores as heavily indebted redemptioners. Then as now, ostensibly “voluntary” immigrants could be victims of profit motives beyond their control. The ways that Lazaretto doctors and local health authorities responded to disease threats can also teach us valuable lessons about courage, transparency, political negotiation, and caregiving under intense pressure. And these are just a few of the stories contained in an unusual riverfront relic, the oldest intact quarantine station in the Western Hemisphere.

David Barnes is an associate professor of history and sociology of science at the University of Pennsylvania and the author of Lazaretto: How Philadelphia Used an Unpopular Quarantine Based on Disputed Science to Accommodate Immigrants and Prevent Epidemics (Johns Hopkins Univ. Press, 2023). He tweets @historyof.

Tags: Everything Has a History North America History of STEM Migration/Immigration/Diaspora