The articles in the December issue of the American Historical Review draw out new approaches to the history of ideas, transnational history, and the histories of memory and emotion. The issue also includes a critical exploration of the 1619 Project and a long-form review of W. E. B. Du Bois’s Black Reconstruction in America (1935); the latter has never been reviewed in the pages of the journal. 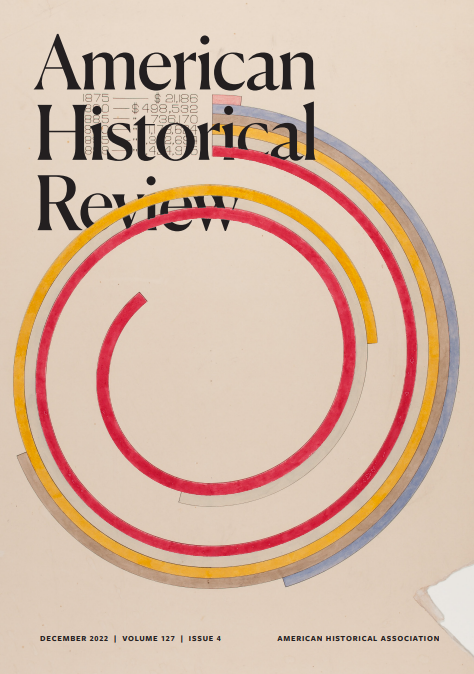 One of more than 60 data visualizations prepared by W. E. B. Du Bois for the Exposition des Nègres d’Amerique at the 1900 Paris Exposition to illustrate the progress made by Black Americans since emancipation. This infographic shows the increasing “assessed value of household and kitchen furniture owned by Georgia Negros.” For the first 100 years of its history, the AHR remained largely closed to the work of Black scholars. This issue includes a featured review of Du Bois’s Black Reconstruction in America, which, like many works by Black historians before the 1980s, was not reviewed in the journal at the time of its publication. Image courtesy of the Library of Congress Prints and Photographs Department, Washington, DC.

Two articles in the December issue use the history of ideas to examine crucial dimensions of the early modern world. In “Compassion as an Agent of Historical Change,” Katie Barclay (Univ. of Adelaide) reexamines the place of pain and compassion in early modern European judicial punishment. She combines a close reading of religious and secular accounts of the body in pain and of public executions to argue that the decline of corporal punishment and the rise of human rights in 18th-century Europe are better explained by changing biological and social attitudes, rather than broad assumptions historians have previously put forward that center changing attitudes toward compassion. Carl Wennerlind’s (Barnard Coll.) “Atlantis Restored: Natural Knowledge and Political Economy in Early Modern Sweden” looks at how elites strove to establish a new economic base to support Sweden’s growing geopolitical prominence after the Thirty Years’ War. He traces the impact on Swedish thinkers such as Carl Linnaeus of an emergent pan-European discourse that sought to use scientific knowledge to transform nature into usable wealth. These self-styled improvers, Wennerlind argues, forged a vision through which they hoped Sweden could embark on a new trajectory of economic growth and political power.

Three other articles discuss how new approaches in international history are bringing into focus histories both smaller and larger than the nation. David Carey’s (Loyola Univ. Maryland) “Medicine and Health ‘in the Least Civilized Regions’” examines how racial thought and public health influenced each other in Guatemala and Ecuador at a time when the Rockefeller Foundation sought to improve public health in both countries. Combining transnational and comparative historical analysis, Carey focuses on Indigenous voices to reveal interconnected and varied forms of racism that shaped Indigenous encounters with public health initiatives and scientific medicine. In “The Political Geography of International Advocacy: Indian and American Cold War Civil Society for Tibet,” Lydia Walker (Ohio State Univ.) maps the advocacy efforts of Indian and American civil society on behalf of Tibet in the immediate aftermath of the Dalai Lama’s 1959 flight to India. While Tibetan nationalists worked across the geographic and political spectrum to generate international support, Walker reveals, anticommunism, empire, and discussions of religious freedom and civilizational solidarity shaped interactions that eventually constrained Tibetan autonomy. Nico Slate’s (Carnegie Mellon Univ.) “The Geography of Nonviolence: The United Nations, the Highlander Folk School, and the Borders of the Civil Rights Movement” also complicates understandings of the post–World War II era. Using rare audio recordings of workshops held in the summer of 1954 by the Highlander Folk School in rural Tennessee, which aimed to connect the United Nations to local action on behalf of racial integration, Slate suggests that the Highlander’s “radical integrationism” challenged the borders of race and opened a space for other kinds of border crossings around nonviolent civil disobedience.

Two final articles explore questions of memory and affect through the lens of cultural history. In “The Well That Wept Blood: Ghostlore, Haunted Waterscapes, and the Politics of Quilombo Blackness in Amazonia (Brazil),” Oscar de la Torre (Univ. of North Carolina at Charlotte) examines the oral myth of a blood-weeping well from a small city in the mouth of the Amazon River. He then uses the myth to discuss the origins and the significance of haunted waterscapes in Black Amazonia, tracking the history of the myth, including its arrival in the 19th century through Bantu-speaking enslaved Africans and its 21st-century iterations in the context of Black rural mobilization after the military dictatorship. Ofer Ashkenazi’s (Hebrew Univ. of Jerusalem) “Reading Private Photography: Pathos, Irony, and Jewish Experience in the Face of Nazism” argues that private photography is among the most readily available visual sources for historians of the 20th century but too rarely used by scholars. Ashkenazi shows that Jewish photography’s recurrent use of pathos and irony reveals a set of understudied Jewish reactions to their own growing exclusion from German society and to major trends in the German Jewish identity discourse of the era.

The December issue includes a critical exploration of the 1619 Project and a long-form review of W. E. B. Du Bois’s Black Reconstruction in America (1935).

The AHR History Lab for December includes a forum on the 1619 Project, which, as most readers know, has become a very public flash point in academic and public debates about the work history does in the world. We invited 19 historians of slavery and race in Africa, Asia, Europe, the Middle East, and the Americas to critically engage with the project in an effort to build a transnational conversation about its reach and reception. The issue also continues the lab’s Engaged History project in a conversation led by Timothy Snyder (Yale Univ.) with curators and historians on the problems of contemporary Polish history museums. History Unclassified completes this edition of the lab. In “Sad Historian,” Carolyn Steedman (Univ. of Warwick) uses the works of 19th-century philosopher William Godwin and poet Oliver Goldsmith to explore the visual turn in history writing.

Reviews of more than 100 books round out the issue, among them a featured review by Elizabeth Hinton (Yale Univ.) of W. E. B. DuBois’s Black Reconstruction in America. Throughout most of its first 100 years of publication, the AHR largely ignored scholarship by Black historians. Hinton’s review is the first of what will be a continuing series of commissioned reviews of books by Black and other underrepresented scholars that should have been, but never were, reviewed in the journal at the time of their publication.

History in Focus, the AHR’s podcast hosted by Daniel Story (Univ. of California, Santa Cruz), offers four new episodes to complement the December issue of the journal at https://www.historians.org/history-in-focus.

The December issue marks the end of Volume 127 and the first year of the AHR History Lab. In 2023, readers can look forward to lab features on deglobalization, rethinking historical agency, using artificial intelligence in historical practice, digital histories of imperial wars, and writing transnational history, as well as a bit more on historical smells. We will also launch the #AHRSyllabusProject, which will mark the first sustained engagement in the journal with the teaching of history. I invite readers to be in touch at ahrassistant@historians.org about what they would like to see in future editions of the lab.