A little over two years ago, I wrote for Perspectives about the 2017 white supremacist riot in Charlottesville, Virginia, the Far Right’s appropriation of the European Middle Ages, and how conversations between medievalists and Americanists could help us better understand the moment. The elision of “Crusade” and “Confederacy,” Templar shields and pseudo-medieval armor next to a secessionist battle flag and statue of Robert E. Lee, might have seemed like an odd juxtaposition at the time, but it made sense as a kind of double nostalgia. The throughline was a militant masculinity and religiosity, a glorification of “lost causes” in which white men fought off supposed “barbarians” (be they Black Americans or Muslims). 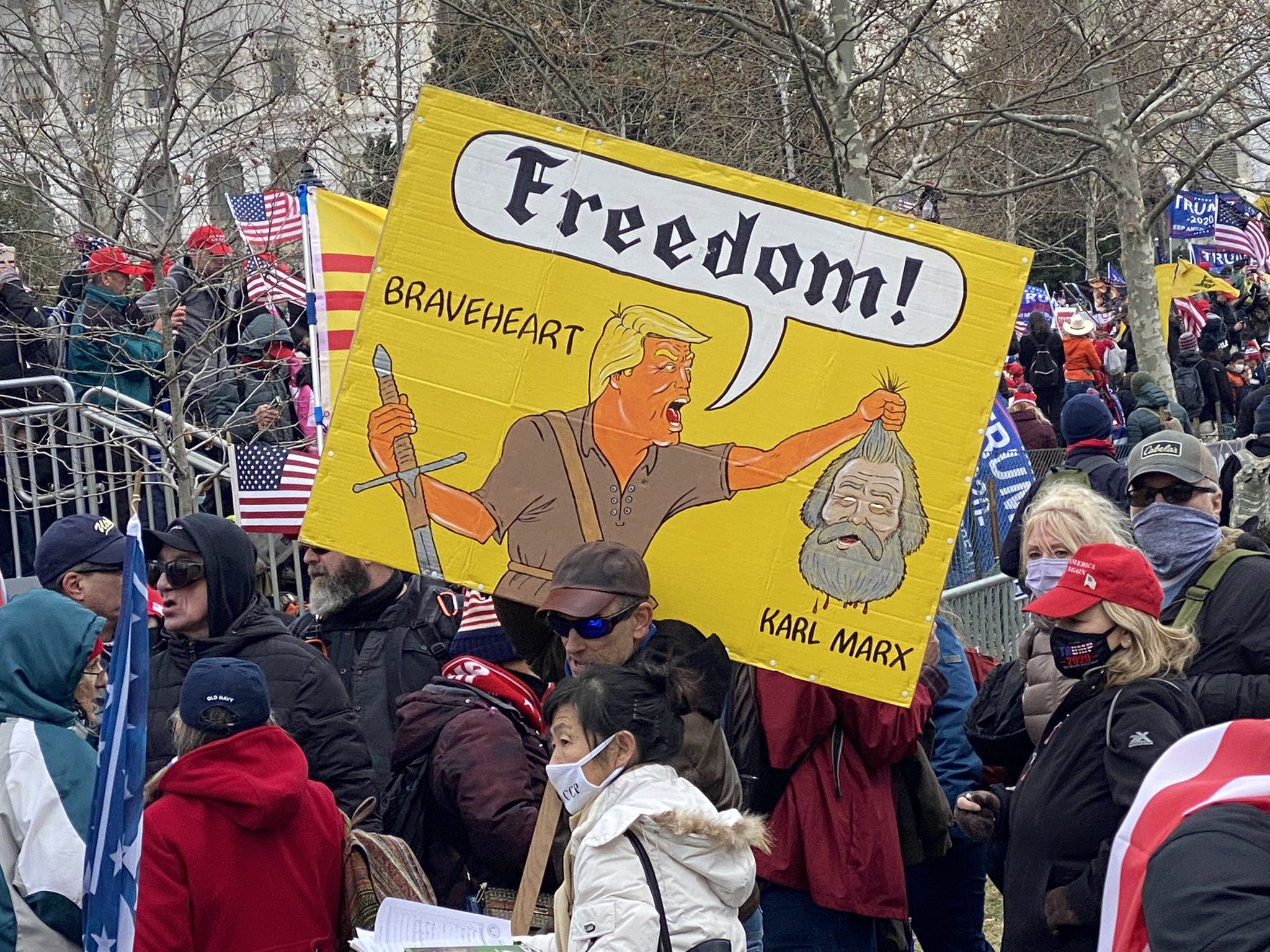 A representative poster from January 6, featuring a mishmash of Trump, the 1995 film Braveheart, and anticommunism. Courtesy Dave Weigel/The Washington Post

Those themes have not abated in the intervening years; if anything, they’ve only intensified. And so here we are in January 2021, in the wake of another right-wing riot, this time a direct attack on the United States Capitol in Washington, DC. The connection between Charlottesville and the insurrection at the Capitol, even across the four years in-between, are clear. So too, are the similarities in imagery seen in the crowd—a mixture of fascist authoritarianism, nostalgia for the Confederacy, and medievalism.

This medieval imagery traffics in the same posturing masculinity that characterizes so much of the Far Right.

The first two might make the most sense to the casual observer, since this was a pro-Trump rally to try to overturn an election, supporting a leader who has gone out of his way to defend Confederate statues and military bases named after secessionists. But that last category of imagery, appearing to invoke the European Middle Ages but really a mash-up of pop culture and anti-Semitism, makes a lot of sense as well. This imagery, of course, still traffics in the same posturing masculinity that characterizes so much of the Far Right. In addition, the Far Right often plays with the common conception of the “Dark Ages,” the sense that it can be anything because many think we know so little about the period, to install their own version of the past upon it. To do this, they focus on discrete (actual) historical moments and use pop culture in combination with outdated historiography. Most often, those focal points revolve around the Vikings and the so-called “Crusades.”

One of the most-photographed seditionists from this past week was Jacob Chansley, a.k.a. Jake Angeli, the self-professed “Q Shaman.” A failed actor and devotee of the Q conspiracy, he showed up shirtless, covered with tattoos, and wearing a horned headdress. He participated in the storming of the US Capitol and had his picture taken inside the Senate Chamber on the dais. The outfit is, to say the least, confused. There are appropriations of Native American dress but mixed with Viking allusions—the horned helmet but more importantly tattoos that have long been associated with hate groups, specifically the Tree of Yggdrasil, Thor’s hammer Mjolnir, and interlocking triangles called the Valknot.

But as Dorothy Kim has written, the point here isn’t historical accuracy. The bridge between ninth-century raiders and modern racists was built by the 19th century, in mainstream scholarship that sought a pure, Romantic, hypermasculine ancestry for a nascent German nation. This was then picked up by race scientists on both sides of the Atlantic. In the US, early 20th-century racists such as Madison Grant and Lothrop Stoddard held up the “Nordic race” as the apex of all civilizations. Unsurprisingly, these American developments were heartily endorsed by the Nazis, using explicit imagery such as Norse runes for their military uniforms.

Their history is a mishmash of tropes, telescoping different historical moments, as the point for the Far Right isn’t historical accuracy.

This lineage continues directly into the 21st century. In the last few decades, however, this older race science has at times melded with a pseudo-new age neo-paganism. For example, the white supremacist terrorist who killed two in Portland, Oregon, posted “Hail Vinland!” to Facebook before his attack. Vinland refers to the short-lived Norse settlements in North America in the 10th or 11th centuries but white supremacist invocations of the term bring us back to the significance of the “Q Shaman.” What the white supremacists are doing “telescopes” history and creates what Danielle Christmas has called “heritage politics,” attempting to stand the actual Vikings next to c. 1900 race science next to the Nazis next to Trump, suggesting a simple and unbroken connection between them all and thereby trying to draw legitimacy from the past.

A similar process is at play related to the Right’s use of medieval Christian holy war iconography, the so-called “Crusades.” Flags supposedly representing the 12th-century military religious order Knights Templar were spotted at the Capitol insurrection, and imagery of knights with crosses emblazoned upon their chests or their shields have been a staple of Far Right internet and protest culture pre-dating the 2017 Charlottesville riot. The origin point here, as for so much modern right-wing terror, may seem to be the 2011 massacre in Norway and specifically the neo-Templar screed the murderer released to justify his actions. 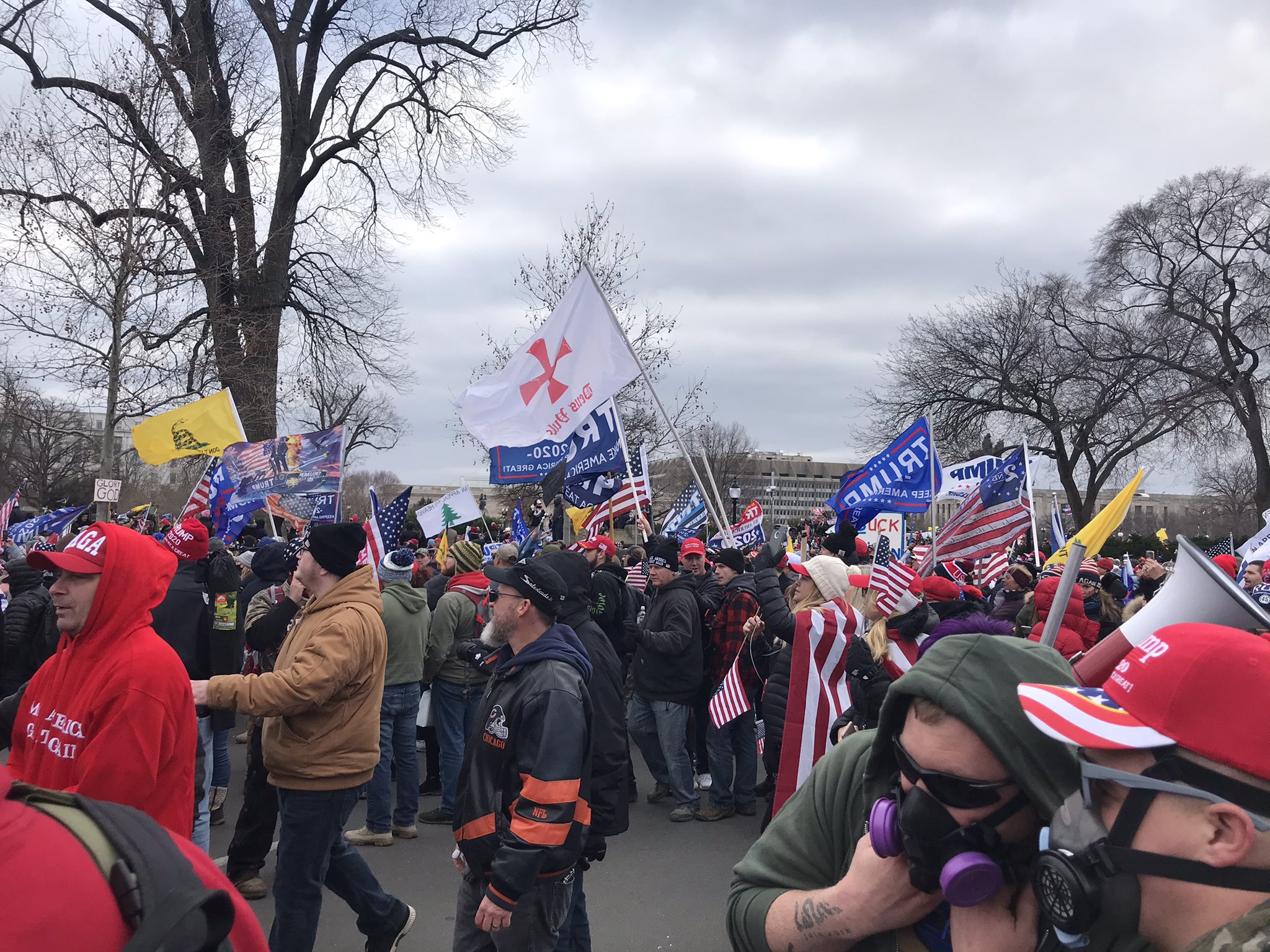 But the roots of this appropriation of medieval holy war go deeper, with the bridge from medieval to modern again being constructed by 19th- and early 20th-century scholarship. Medieval Christian holy war was deployed at that time in service to European colonialism, to justify current occupations and explain ongoing conflicts between European powers in North Africa and the Middle East. In this telling, a racially and religiously “pure” West had to defend itself from a racially and religiously barbarous Islam. Those wars may have “failed” but they “saved” Europe and began a “Clash of Civilizations” that continues to this day. Contemporary scholarship, often unconsciously but sometimes maliciously, repeats some of these claims even into our own day—of a homogenous West defending itself from an invader.

And this is the foundation upon which white supremacists now base their claims. Yes, they freely use memes and draw on gaming culture for some of their information but they also read books. Their history is a mishmash of tropes, telescoping different historical moments, as the point for the Far Right isn’t historical accuracy. White supremacists use the Crusades as a time when strong white men were supposedly justified in using violence against a racial and/or religious other. And they find an ally in that rhetoric with the Trumps.

Also two years ago, Mary Rambaran-Olm and I wrote about why getting medieval history right matters. Part of it is about honesty to the past; none of the white supremacist understandings of the Vikings or Crusades are accurate (even if they find roots in some academic work). But pointing out factual inaccuracies will never be enough.

In late 2016, Sierra Lomuto warned medievalists to think about the ethics of how they teach and write about their period. It’s not our job to simply give our students information. Instead, we have to help them discern amongst all that information, giving them all we know about a historical period but then making sure they understand why it matters—how that information is being used in the present. It’s our job as historians to remind our audiences of hard truths, that it’s always more complicated than that—even if those are lessons people might not want to hear.

Neil Price, Children of Ash and Elm: A History of the Vikings (Basic Books, 2020)

Matthew Gabriele is a professor of medieval studies and chair of the Department of Religion & Culture at Virginia Tech. He tweets @prof_gabriele.