Of all the images to come out of the insurrection that took control of the Capitol on Wednesday, January 6, one of the most startling shows a member of the mob striding through the halls of Congress with a Confederate flag slung over his shoulder. It took 160 years for that symbol of treason in defense of the rawest form of human exploitation to reach the core of the federal government. Now it was there, carried in an act of desecration on behalf of the current president of the United States. 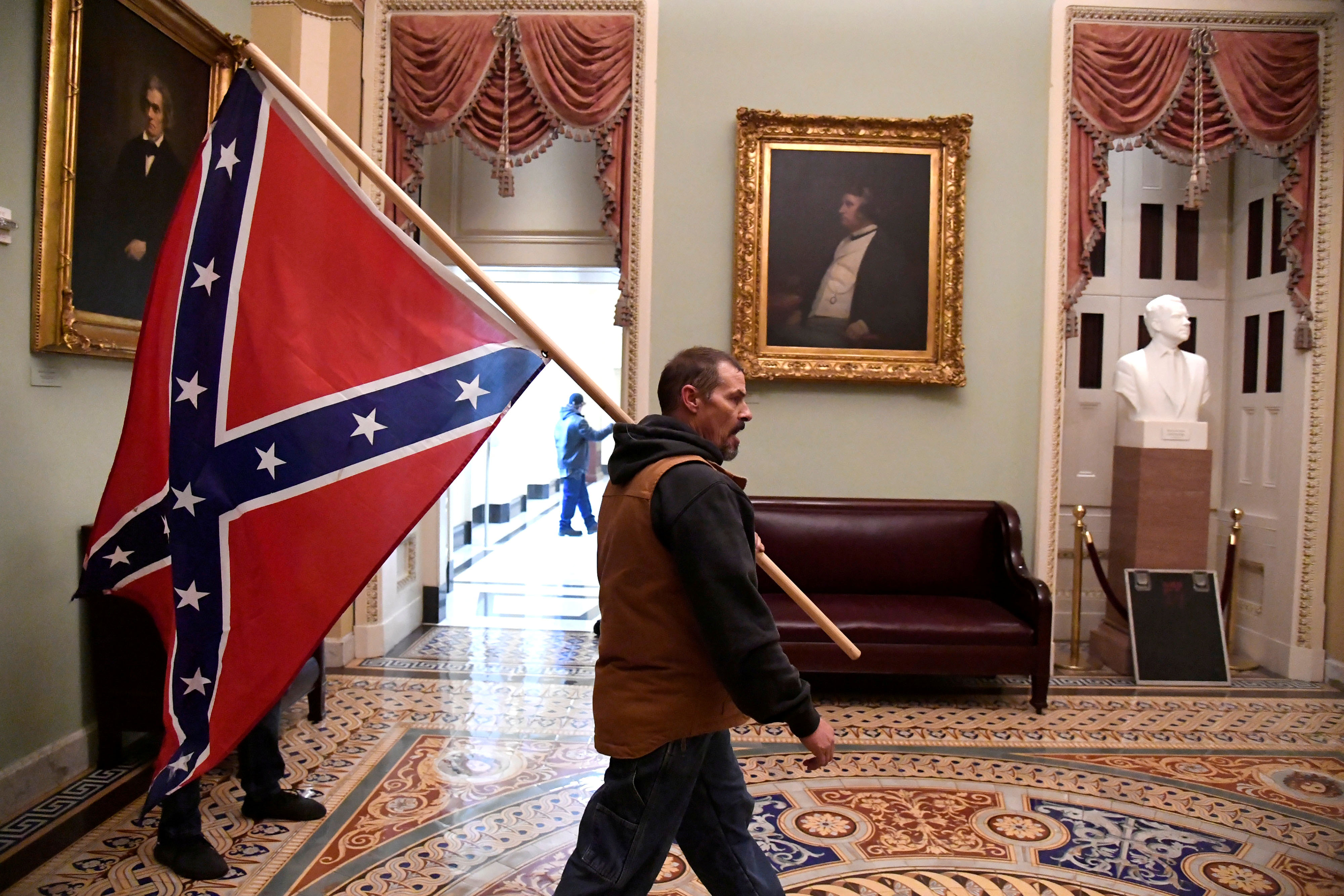 A member of the mob that stormed the US Capitol on January 6 holds a Confederate flag aloft in front of a portrait of John C. Calhoun (left). Mike Theiler/Reuters

Since then, commentators have been referring to the “unprecedented” nature of Wednesday’s terrifying attack. It’s a fair enough characterization. Although the United States has been far from a perfect Union, its national political institutions have generally been guided by at least a workable framework of norms and principles. For the last four years the Trump administration has trampled on the legal, ethical, and procedural norms central to the work that takes place in the Capitol. Yet there was something new in those terrible hours of violence on Capitol Hill. Something unprecedented.

To emphasize that discontinuity without reference to its roots, however, is to run the risk of removing a single day’s events from the processes that shaped and enabled them. The braided relationship between history and civics will make January 6, 2021, a central concern in classrooms and other educational venues across the country. How can we help our students and others to connect the particulars that played out on our screens to those larger processes? What stories might we tell to show that even unprecedented events have a history?

What follows is the version we would tell. We share it in the spirit of collaboration rather than authority, as a starting point for conversation.

There was something new in those terrible hours of violence on Capitol Hill. Something unprecedented.

We would begin where the Confederate flag tells us we have to go. Over the last four decades, the long tradition of white supremacy and xenophobia in the United States has become thoroughly entangled with economic transformations and sweeping demographic changes to produce a powerful sense of white embattlement and grievance. A closely related hypermasculinity, often linked to white supremacy, has drawn on historical entitlements, especially in the cultural realm. This swampy mix has both drawn upon and nourished traditions of anti-elitism and conspiratorial thinking: the paranoid style of American politics, to use a well-worn but apt phrase, is now amplified by social media, a force so compelling its postings could convince a swath of the public that Hillary Clinton was running a pedophilia ring out of the basement of a Washington, DC, pizzeria. Running through it all has been a growing skepticism of the very concept of the public good. In the 1980s, Ronald Reagan demonstrated the effectiveness of demonizing government as a threat to liberty. Forty years later, a substantial share of Americans believe that they have a constitutional right not to wear a face mask in the middle of a respiratory pandemic.

Those are the processes that a cadre of politicians seized upon to promote their power and position. It was in the opposition to Barack Obama that the pieces first came together: in the right-wing populism that made Sarah Palin the breakout star of the Republican Party in 2008, the online mobilizations the Tea Party used to mob congressional town halls in the summer of 2009, the fevered embrace of gun rights as a symbol of political purity even amid the slaughter of school children, and Donald Trump’s cynical embrace of birtherism to build his political brand. In the last four years, that politics reached its highest level. On Wednesday it unleashed its insurrection.

Where do we go from January 6?

Where do we go from January 6? The image of that Confederate flag reminds us of the stakes. In the half century after the Civil War, white Americans “healed” the nation’s wounds in part by fashioning a manipulative history of the war as “tragic” and “unnecessary.” In the process, they legitimated both the “Slaveholders’ Republic” and the brutal racist regime white Southerners built in place of the radical Reconstruction that white terrorism had destroyed. The flag that disgraced the Capitol on January 6 is a product of the history that produced a reconciliation infused with injustice and dependent on voter suppression for its survival.

Let’s get it right this time, by facing the inescapable fact that equity and inclusion can be attained only through a national reckoning with inequity and exclusion. Otherwise we will once again attempt national conciliation without addressing the roots of rupture. We will have learned nothing from our history or this day of national infamy.

Kevin Boyle is the William Smith Mason Professor of American History at Northwestern University. James Grossman is executive director of the AHA; he tweets @JimGrossmanAHA.