The Past, Conditionally: Alternative History in Speculative Fiction 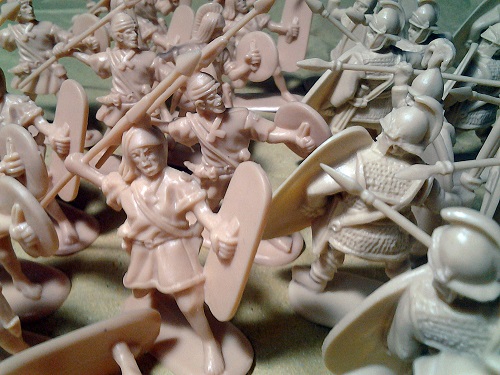 On November 20, Amazon Prime Instant Video brought alternative history to the small screen with its made-for-streaming series The Man in the High Castle. The source is a novel by science fiction writer Philip K. Dick, whose work has previously spawned movies such as Blade Runner, Total Recall, and Minority Report. With The Man in the High Castle, however, the author imagined not a possible future, but a different American past, in which World War II has left Japan occupying the Pacific coast, Germany running the eastern half of the nation, and a remnant United States government centered in Colorado. The Amazon series is an opportunity for historians to think seriously about this increasingly popular genre that unmoors the historical imagination from its evidentiary anchors. Alternative history is a subgenre of SF (“science fiction” or “speculative fiction”) that creates a fictional world in which an action or event in the past has caused history to diverge from its known course. For the quickest and funniest introduction, see James Thurber’s 1930 classic from the New Yorker, “If Grant Had Been Drinking at Appomattox.” In fewer than a thousand words, Thurber presented a befuddled and boozy Sam Grant who reverses the known historical outcome by surrendering to Robert E. Lee. The story is wickedly funny, and it is also a teaching opportunity. How do we separate historical myths like Grant’s taste for whiskey from realities of life in the Civil War armies? How did each side cope with the search for effective commanders? Did the South have the capacity to continue the war if the Army of Northern Virginia had found time to regroup?

Alternative histories fictionalize the counterfactuals that are embedded in historical thinking. In so doing, the genre can help both scholars and students to broaden their historical imaginations. Skilled practitioners not only set intellectual puzzles (“what if...?”) but fill their scenarios with interesting and compelling characters who provide a sense of everyday life in a different time and place. Dick did this very well in High Castle, published in 1962 and set in the same year. After half a generation, Americans are adjusting to defeat. Interlocked stories include a San Francisco antiques dealer trying to please Japanese clients and a Colorado Springs waitress who fantasizes about a resistance movement. There is enough action to drive a TV series, but the author’s deeper interest is in how the characters adjust to the new circumstances he’s imagined for them (including yuppies flocking to the German-occupied eastern states, where opportunity beckons to ambitious non-Jews).

Alternative histories provide an intriguing window on the ways in which particular peoples understand their pasts, for the genre’s practitioners often reimagine events and turning points that are central to national mythologies. It is no surprise that Americans like to re-envision the Civil War and the Indian wars. British writers repeatedly imagine life after German victory in 1941, with the United Kingdom sharing the fate of Vichy France. For this American reader, it is instructive to see how deeply the Elizabethan era is embedded in the English sense of national greatness, for multiple writers have speculated on the retrogressive results if the Tudor settlement had failed and the Reformation had fizzled. For example, in The Alteration (1976), Kingsley Amis pondered the consequences if Martin Luther had become Pope Germanian and Henry VIII had never Historireigned. In the mid-20th century, the Roman Catholic Church keeps a tight hand on the controls in Europe and frowns on science. Diesel engines are permitted, but electricity is forbidden because its “invisible” operation seems to impinge on the spiritual realm. The “alteration” of the title, and the center of the character-driven plot, is the castration of a boy singer for the Vatican choir. Amis’s underlying assumption, which he shared with Keith Roberts in Pavanne (1968), is that English Protestantism is progressive and Catholicism repressive—evidence of the staying power of Tudor mythmaking.

Alternative history dramatizes the perpetual tussle between structure and agency. What we can call “for want of a nail” stories play off the near-eternal debates about the outcomes of famous battles and assassinations. Some are thoughtful and some are hack work, but they keep coming in endless succession. Thurber’s take on the surrender at Appomattox has not stilled the public appetite for stories about Waterloo and Gettysburg.

One novel that engages directly with contingency and agency as an intellectual challenge is Past Conditional: A Retrospective Hypothesis (1975, translated 1989), a fascinating entry by Italian novelist Guido Morselli. Like much alternative history, Past Conditional centers on imagining the processes of change. During World War I, an Austrian army engineer conceives a plan to introduce a strike force into Italy by connecting a set of mining tunnels under the Alps. After bureaucratic stop-and-go that reaches to Austro-Hungarian chief of staff Conrad von Hötzendorf, the plan succeeds, Italy drops out of the war, and France soon follows. Morselli worked in the heavily theorizing world of postwar Italian intellectuals, and his intent was to attack structural models of history. Scholar Daniele Visentini has pointed out that the Italian title Contro-passato prossimo more directly implies Morselli’s belief that, in Visentini’s words, “history is not rational and the most important aim of the novel is to re-address it and re-create it.”1

Kim Stanley Robinson’s sweeping reimagination of world history in Years of Rice and Salt (2002) takes the opposite side of the argument. Robinson, one of the most versatile and distinguished of contemporary SF writers, explores a world in which 14th-century plagues have killed everyone in Europe. The Islamic world, India, and China are free to develop without European interference— in effect inverting the narrative of William McNeill’s Rise of the West and the work of all the scholars who have tried to explain Europe’s geopolitical success. Robinson proposes a world system that moves in the same broad directions as our familiar world. Islamic scholars in Samarkand replicate Newtonian science; India starts the Industrial Revolution; and in the 20th century, the Islamic world and China are locked in an endless trench war across the heart of Asia. Readers do not have to agree with Robinson’s extrapolations to appreciate the thought experiment of imagining the world without Europe.

Alternative history is a booming field. Aficionados have presented the Sidewise Awards since 1995. Mainstream novelists like Michael Chabon and Philip Roth enjoy alternative history’s speculative freedom. Academics are also increasingly interested.2 In April 2015, the University of Liverpool hosted the Sideways in Time: Alternative History and Counterfactual Narratives conference, which drew heavily from literature and cultural studies. Historians can join in, too; instructors and students can compare the sort of futures imagined by Amis and Robinson with the speculative essays collected by historians Philip Tetlock, Richard Ned Lebow, and Geoffrey Parker in Unmaking the West: “What-If?” Scenarios That Rewrite World History.3

Because I am a historian, the writers I find most interesting work with the known materials of a particular time and place and explore possible human responses to imagined situations that lie within the realm of foreclosed possibilities. None of the books that I’ve highlighted sends characters back and forth among the infinite parallel worlds of quantum theory. None of them depends on miraculous inventions that emerge before their time or on time travelers to alter the past—no Connecticut Yankees allowed. They are serious efforts to think about the contingencies of history in ways that challenge and entertain at the same time.

Carl Abbott is professor of urban studies and planning, emeritus, at Portland State University and a past president of the Pacific Coast Branch of the American Historical Association. He is the author of a number of books on the history of American cities, as well as Frontiers Past and Future: Science Fiction and the American West (2006) and Imagining Urban Futures: Science Fiction Cities and What We Might Learn from Them (forthcoming).