No More Guilty Pleasures: Popular Culture (and More) in the January Perspectives on History

Are historians shaking off a Frankfurt School hangover? Anecdotally, it seems that having a taste for mass culture is more acceptable today than it was in the past, at least for the critical set. In fact, I expect to hear animated discussions of Lady Mary’s dresses and the Dowager Countess’s quips at the annual meeting this coming weekend. I also expect to hear a bit of shaming in response, as Downton Abbey wears its Tory take on history on its bespoke sleeve. There’s nothing wrong with such conversations, but historians aren’t the only ones having them. Part of the success of Downton (and other smart, sumptuous shows like it) comes from the writing, casting, and costume design. But it must also include the pleasure of historical thinking: as Downton shows, people simply didn’t have the same mind-set in 1920s Britain as they do today, and worldviews could shift depending on class. Historians are well acquainted with the pleasure of uncovering lost modes of perception, but we need to acknowledge the broader appetite for it as well, expressed in popular culture. 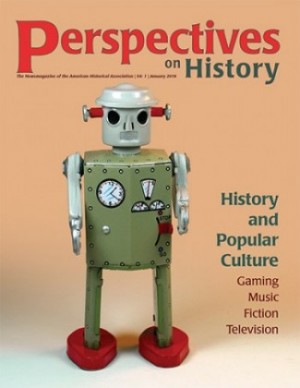 This month, Perspectives on History presents three features that explore historical thinking in video games, speculative fiction, and popular music, as well as a review of a television portrayal of a certain group of English colonists. Robert Whitaker (Louisiana Tech) relates his successful efforts to bridge academic history and the gaming public through an Internet series featuring commentary on games with historical settings. When he began the series (History Respawned), he had doubts about whether gamers would care, but in fact they were deeply interested in the historical accuracy of games set everywhere from the 18th-century Caribbean to Shogunate Japan.

Carl Abbott (Portland State Univ.) uses the streaming series The Man in the High Castle as the jumping-off point for a consideration of alternative history, a subgenre of speculative fiction. “Alternative histories fictionalize the counterfactuals that are embedded in historical thinking,” he explains. Just as Philip K. Dick (author of the novel on which the streaming series is based) spun out possible consequences of an Allied loss in World War II—including the occupation of the East Coast of the United States by a Nazi puppet government—so fans of alternative history consider the past’s contingencies. There are no time machines or aliens—just different outcomes based on real possibilities.

Alex Hidalgo (Texas Christian Univ.) tells us about a classroom experiment that became a fixture in his Latin American history courses: using music of various time periods and styles to set a mood, make a point, or provide a sense of what an event must have sounded like. In some cases, musical pieces served as primary sources, but in others they stimulated discussion despite being anachronistic. To Hidalgo’s students, Aretha Franklin’s “formidable singing and musicianship” conveys a sense of the subversion of gender roles during the Inquisition in Spanish America.

Finally, Karin Wulf (the Omohundro Institute/William & Mary) analyzes filmmaker Ric Burns’s Thanksgiving presentation, The Pilgrims. Despite its attention to the process of mythmaking around these fervent religious dissenters, Wulf argues, The Pilgrims ultimately presents them as figures representing the roots of the United States. What the film leaves out is as important as the faraway look in the eyes of William Bradford, played by the late Roger Rees.

There’s much more in the January Perspectives, including a timely report from Priya Satia (Stanford Univ.) on the politics of South Asian academics criticizing Indian prime minister Narendra Modi from inside and outside India, and the AHA’s Seth Denbo’s article on the US Holocaust Memorial Museum’s new project, History Unfolded: US Newspapers and the Holocaust, which incorporates citizen-historians’ research in local newspapers to see what Americans in smaller communities knew about the Holocaust.

As always, feel free to write to Perspectives at perspectives@historians.org. We hope you enjoy this new issue and hope to see you at the annual meeting very soon!