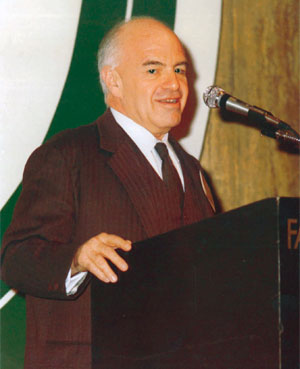 Preeminent Historian of the American Experience

Oscar Handlin died at his home in Cambridge, Massachusetts, on September 20, 2011, a few days short of his 96th birthday. Handlin was not merely the nation's preeminent historian of American immigration; his enormous body of work examined the American experience in its totality. His writings were based on deep research, but presented in lucid and lively prose that reached many readers beyond the academy.

Handlin was born in Brooklyn in 1915 to Jewish immigrant parents from Russia. Young Oscar was a precocious reader, and discovered how to navigate the delivery cart for the family grocery business through crowded city streets with his nose buried in a book. Not surprisingly, he was bored, restless, and rebellious in the public schools he had to attend. Brooklyn College, which he entered at 15, was liberating. By 18 he had his diploma and had been accepted for graduate study at Harvard University. His teachers in Cambridge had not encountered anyone like him before. East European Jews from immigrant stock were rarely seen around Harvard Yard. Harvard College, indeed, had a quota system to prevent it from having "too many" Jewish students. Soon, though, Handlin's exceptional ability was apparent to all. When he finished his dissertation under the supervision of Arthur M. Schlesinger, Sr., in 1940, he was appointed to the Harvard faculty as an instructor. He would spend his entire career at Harvard, eventually retiring as the Carl H. Pforzheimer University Professor in 1984.

His PhD dissertation was published in 1941 as Boston's Immigrants, 1790–1865, and it won the AHA's John H. Dunning Prize. In those days, Frederick Jackson Turner's "frontier thesis" was still widely regarded as the key to understanding the evolution of American democracy. Boston's Immigrants shifted attention from rural to urban America, and stressed the centrality of immigration in shaping American society. With the aid of previously ignored manuscript census schedules, Handlin illuminated the experience of the common folks who crossed the ocean and settled in Boston. There were similarities among them, but in Boston, the Irish immigrants stood apart from other newcomers in many ways. Their path to assimilation left them with a strong sense of group consciousness that was a source of conflict for many decades to come.

Handlin dealt with immigration history from a different vantage point in his Pulitzer Prize-winning volume, The Uprooted (1951), his most popular and accessible work. It focused on what was common to the experience of most immigrants to American shores, and subtly analyzed the psychology of the newcomers. Written in richly evocative prose, it stressed the peasant origins of most of the peoples arriving in the great migration waves of the 19th and early-20th centuries, and the wrenching hardships entailed in their move from a fixed European social order to the fluid and dynamic American one. Later historians would question Handlin's model of peasant society, but no one has subsequently covered the whole subject more convincingly in a single, brief volume.

Handlin further explored the themes of Boston's Immigrants and The Uprooted in many subsequent works that remain relevant today, including The American People in the 20th Century, Race and Nationality in American Life, and The Newcomers: Negroes and Puerto Ricans in a Changing Metropolis. Differences in national origin, ethnicity, race, and religion—what later scholars would term "ethnocultural" differences—were enduring factors in American life, and no scholar did more to enlarge our knowledge of them. If you wish to understand the peopling of America, Handlin's works remain the essential starting point.

Handlin's interests extended far beyond immigration and ethnicity. His books and articles spanned the full range of American history from the earliest settlements to recent decades and were by no means confined to social history. He did biographies of Abraham Lincoln and Al Smith, for example; a history of youth and the family; a book on war and diplomacy, Chance or Destiny: Turning Points in American History; and a collection of reflections on his discipline, Truth in History. He analyzed the nature of American liberty in Dimensions of Liberty, sketching ideas explored more fully in his final publication, the four-volume Liberty in America, 1600 to the Present.

Handlin was fortunate to find two successive life partners who collaborated with him in his research and writing. His first wife, Mary Flug, worked closely with him until her death in 1976. He subsequently married Lilian Bombach, a historian at the Hebrew University in Jerusalem who coauthored of several of his later works.

Although his scholarly output was prodigious, Handlin did not free up time for research and writing by shirking his responsibility to students. He was deeply dedicated to the instruction of both undergraduates and graduates. His lecture courses were not theatrical performances calculated to demonstrate how clever, wise, and witty he was. Speaking slowly, without notes, he lucidly laid out basic concepts and analyzed the historical evidence. It was highly distilled material and required close attention to grasp. Nevertheless, he attracted large audiences.

In discussion classes and research seminars, Handlin spoke very little, and most of his comments were in the form of questions. He resisted the temptation to answer them himself when no one leaped to respond. He would let the silence build until one of his students was impelled to blurt out a comment that got the discussion moving in a productive direction. The point of instruction in courses of this kind was not to tell the students what Oscar Handlin thought about the subject. It was to force them to think for themselves.

That was even more the case when it came to the supervision of doctoral dissertations. Eighty graduate students did their theses under Handlin's guidance over the course of his career, more than any of his colleagues were responsible for. He had no interest in building a "Handlin school" of disciples, steering dissertation writers to topics that would fit his research agenda. Students were entirely free to pursue whatever topic interested them. Handlin would suggest possible sources, help them to narrow and sharpen their focus, and provide detailed criticisms of their prose. His students finished their theses with him knowing that, for better or worse, their manuscripts were solely their own work.

Handlin also somehow found the time to be a creative academic entrepreneur and administrator. At Harvard, he founded the Center for the Study of Liberty in America, and then the Charles Warren Center for the Study of American History. From 1979 to 1984 he served as director of the Harvard University Library, and pushed for more rapid adaptation to new technologies.

He also helped to shape national policy in a crucial area. He believed that American immigration law had taken a wrong turn in the 1920s with the passage of the discriminatory national origins quota system. His critical writing on the subject led to his involvement in groups pushing for reform, and the opportunity to testify before Congress. When the Immigration and Nationality Act was signed into law in 1965, some of the credit for a historic legislative achievement belonged to Oscar Handlin.