The American Historical Review in the 21st Century

Big changes have come to the American Historical Review. In August 2021, Mark Philip Bradley (Univ. of Chicago) began a five-year term as editor. Over the last 18 months, Bradley has led a massive effort to redesign the journal, from the kinds of articles that are published to its visual appearance to a relaunch of the AHR podcast, so that the journal itself now looks radically different. And there have been changes behind the scenes too: the AHR has recently relocated back to the AHA’s home in Washington, DC. 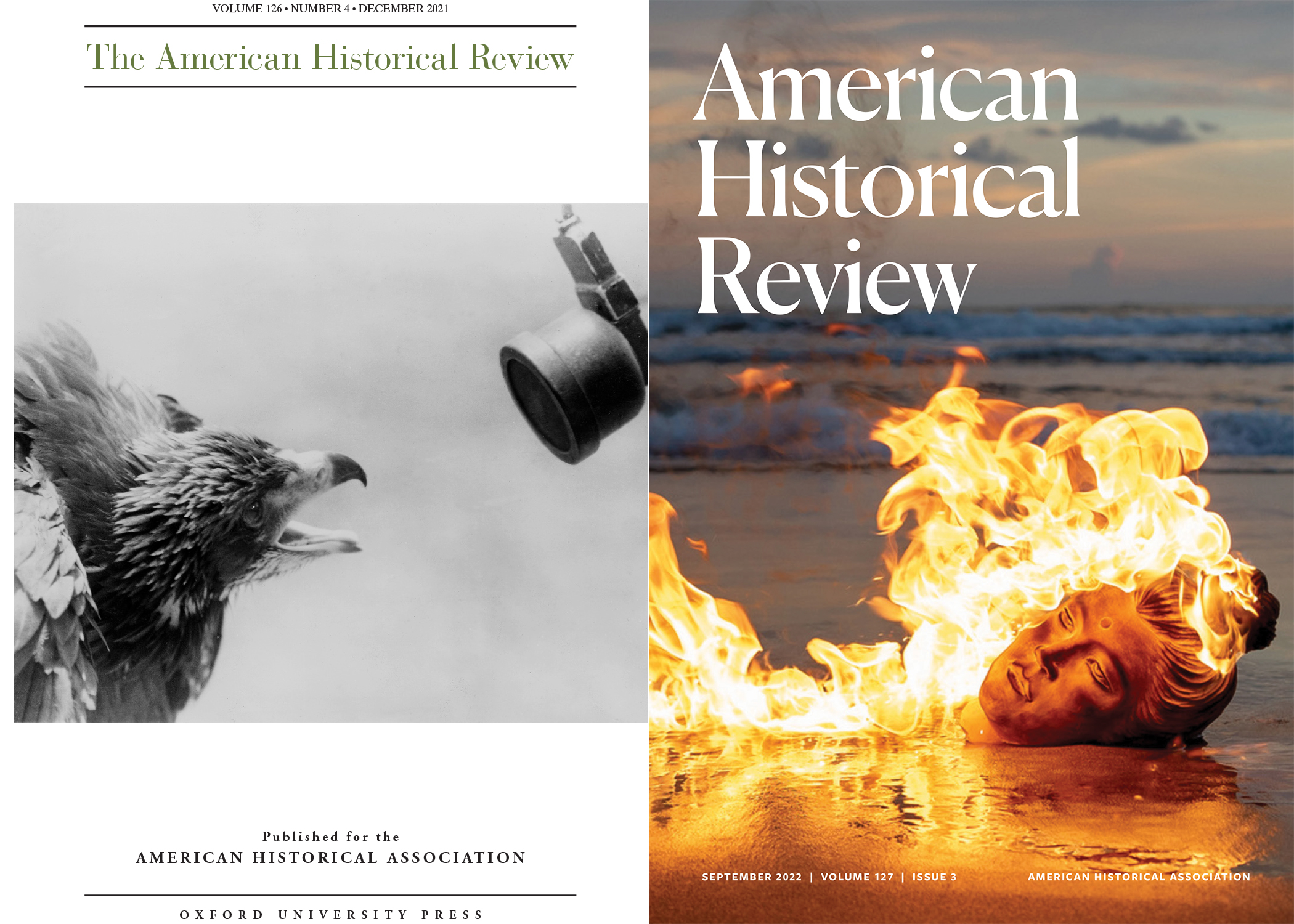 The December 2021 and September 2022 covers of the AHR illustrate the journal’s first redesign since the 1970s. Courtesy American Historical Review.

The AHR was founded in 1895 as an independent publication. After three years, the AHA began to support the AHR financially and offered it as a member benefit. Yet the journal maintained its institutional independence until 1915, when it became an official AHA publication. Elements of that initial independence remain. The editor is responsible for broad strategy and making individual article decisions, nominating historians to serve on the board of editors and as associate review editors, and serving as the public face of the journal, both externally and on the AHA Council as an ex officio member. The AHA’s Research Division oversees the work of the journal in consultation with the editor.

For five decades, a partnership between the AHA and Indiana University Bloomington (IU) maintained a geographic separation to match the administrative division. While the AHA is headquartered on Capitol Hill in Washington, DC, the AHR moved from DC to IU in 1975. As was written in the AHA Newsletter at the time, the “AHA Council had become increasingly concerned with costs, especially those generated by an editorial staff in Washington which has consisted primarily of professional editors.” This move allowed for lower operation costs, as well as the advantage of working with a research university. The AHR editor held a faculty position shared between the AHA and the history department at IU. Other IU faculty members served as associate editors of the journal or consulted for the reviews section. Over the years, dozens of IU graduate students served as editorial assistants (EAs), learning about the processes of scholarly publishing.

Perspectives spoke with several members of the IU community about this relationship. Robert Schneider, editor (2005–15) and interim editor (2016–17), said, “It’s hard to overestimate what the AHR has meant to Indiana University, and especially the Department of History. Let me just say that the presence of the journal endowed the department with something unique.” Alex Lichtenstein, associate editor (2014–15), interim editor (2015–16), and editor (2017–21), agreed, especially for the graduate students who worked as EAs. For those who worked at 914 Atwater Avenue each year, “it created a really special intellectual community. Not only did these students get excellent training in editorial practice—a valuable skill—they also learned a great deal about the historical profession, good and bad.”

During Schneider’s and Lichtenstein’s terms as editor, the journal made several changes. Structurally, one big shift came during Schneider’s editorship. The AHA, under executive director Arnita Jones’s leadership, began working with university presses to publish the journal—first the University of Chicago Press, and then Oxford University Press (OUP), which remains the AHR’s publisher in 2023. The journal also began broadening its content. Although articles and reviews continued to be the bread and butter of the publication, Schneider and Lichtenstein added new formats, including the featured review, AHR Conversations, and retrospective essays on classic historical works. The popular History Unclassified section, started in collaboration with Kate Brown (Massachusetts Institute of Technology), has allowed historians to take an often more personal approach to research. Lichtenstein also expanded the reviews section far beyond the historical monograph to include films, graphic histories, museums, websites, source collections, podcasts, memoirs, and even video games, which, he said, “gave us the opportunity to make some really creative combinations of works and reviewers.” Near the end of Lichtenstein’s tenure, a massive staff effort and collaboration with OUP integrated the AHR into its first online submission system, ScholarOne, and in 2021, the journal transitioned from five issues per year to four while maintaining the same annual page count.

The History in Focus podcast is moving in the direction of immersive storytelling.

Lichtenstein also took the AHR into the digital and audio realm, including the AHA’s first podcast. Daniel Story, an EA from 2016 to 2018, produced AHR Interview from its launch in October 2017 until it wrapped up in June 2021. As Story described, “AHR Interview was true to its name—it offered more or less straight-up interviews with minimal editing.” These were conversations with authors focused on individual articles “at a level probably most appealing to other historians and history grad students.”

Since February 2022, the podcast has continued as History in Focus, which Story said is “moving more in the direction of immersive storytelling.” As he told Perspectives, “In the beginning, I was simply happy to help the journal out, but I quickly caught the audio bug. I really enjoyed editing and, more than that, was growing more and more intrigued by the ways you could tell a compelling story through audio and how that approach was really well suited to history.” After he completed his PhD, he took a position at the University of California, Santa Cruz, as digital scholarship librarian. And now with History in Focus, Story gets to think creatively. “Sometimes [an episode] is delving into the historical content explored in an article; sometimes it’s peeling back the curtain on process; or maybe it’s asking bigger questions around the meaning and importance of historical work in different contexts. My favorite pieces include some element of all of these.”

Just as the digital environment opens new arenas for content, it also enables new structural possibilities amid a shifting financial landscape. In the mid-2010s, the Council charged the Research Division with preparing a report on the future of the AHR. Led by vice president Edmund Russell (Carnegie Mellon Univ.), their research found that continuing to headquarter the AHR in Bloomington with a local editor in chief was inadvisable. The division’s report, issued in June 2017, recommended a distributed model, in which the editor of the journal could be located anywhere, while the production office could be moved to the AHA headquarters. Alternatively, IU could maintain the production office, but the committee recommended that an editor in chief not be required to relocate.

In January 2018, the Council voted to allow the next editor to remain at their home institution. As Russell said at the time, “The most important considerations during these discussions were the necessity of achieving the AHA’s goals for the journal, and ensuring that the journal would best serve the needs of the discipline for the long term.” In 2019, the AHA opened a national search to hire an AHR editor who was no longer required to relocate. The Council selected Mark Philip Bradley to start as AHR editor in August 2021.

The appointment of an off-site editor left the Research Division’s second recommendation from 2017 as an issue to remain on the table and be reconsidered as conditions evolved. That evolution accelerated with the impact of COVID-19 on work environments across the world. If the editorial staff would be in an office for only two or three days per week, it was logical to question whether it made sense to maintain two separate work sites.

The 21st-century journal needs to operate very differently—not only to survive but to flourish.

The Council’s executive committee decided in March 2022 to make the change to a single AHA work site, bringing the production office to the AHA’s DC headquarters. A new AHR managing editor, Sarah Muncy, joined the AHA staff in July, and Alana Venable was promoted within the AHA staff to deputy managing editor. Associate editor Fei-Hsien Wang (Indiana Univ. Bloomington) continues to do her work on the IU campus, supervising the EAs assigned to the AHR in 2022–23. The final team of EAs will work directly with the DC staff in 2023–24, as the journal continues to make the transition to a review process anchored in the work of the associate review editors.

This transition fits well with Bradley’s vision for the journal. One of the big pitches Bradley brought was the AHR History Lab, which would transform the “middle of the journal”—the space between the articles and the reviews—into an innovative, interdisciplinary intellectual space. “I see history being made in and out of the academy in all kinds of diverse ways,” Bradley told Perspectives, “whether by community activists and visual artists, public historians and archivists, or curators and chefs. These individuals have found new ways into our practice that historians like me, who are still primarily writing traditional monographs, can learn from.” The lab launched in the March 2022 issue and has led to many firsts in AHR history, including its first graphic novella and a peer-reviewed scratch-n-sniff card. This space is one way Bradley is attempting to address the uncertain future of scholarly publishing. “Serious financial pressures on print journals, the challenges of open-access protocols, and the changing nature of scholarship in the digital sphere all suggest the 21st-century journal needs to operate very differently—not only to survive but to flourish.”

What should readers expect from the AHR in 2023? The lab will include projects on deglobalization, agency, artificial intelligence, and digital history. The new #AHRSyllabus project will offer a series of teaching modules using case-based approaches to exploring the historical method. The journal is also collaborating with the podcast Sexing History on the history of a Texas abortion clinic run by a former evangelical minister. The team will produce the first digital-only special issue of the AHR in 2024, which will focus on histories of resilience. Overall, the journal strives to serve the interests of historians in the present and is working to showcase the many ways of being a historian and doing history.